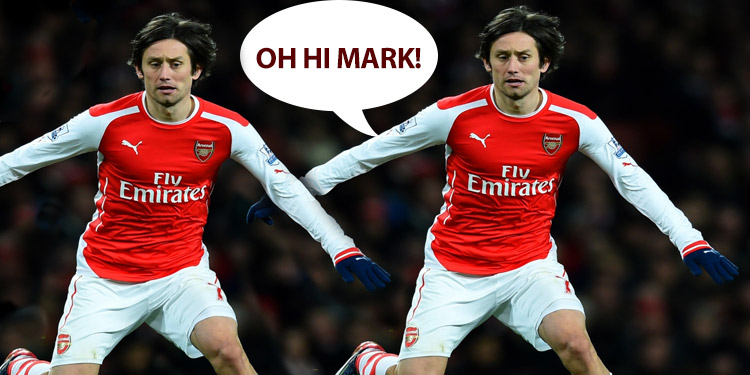 I was having a wonderful dream this morning – I was about to play for Arsenal in the final game of the season. We were waiting in a room, kicking a ball against the wall, and outside that room was the tunnel. The team sheet came out. I was there. So was 7 – Rosicky. And then there was 8 – Mark. And we all asked Arsene Wenger ‘Who the hell is Mark?’

‘That’s Rosicky,’ he said, and then there were two Rosickys in the room, much to the amazement of Paul Merson who was stealing the UEFA Cup trophy which we had previously stolen from Sevilla. Then my alarm went off and I never got to play. I think it’s a metaphor for my life in some way, I just haven’t quite worked out how yet.

Speaking of Tomas Rosicky, he has been named in the final 23 man Czech Republic squad for the European Championships. He’ll join Petr Cech, of course, and in total there are 10 Arsenal players at the tournament.

Czech Republic: Rosicky & Cech. Hopefully Tomas gets a chance to play a decent part. I still think it’s a shame that he was unable to say goodbye to Arsenal properly, having been involved in a game.

Spain: Hector Bellerin was named in the final squad after injury to Dani Carvajal opened the door for him. I wrote earlier this week about how fortune smiles on him, and this is a fantastic opportunity for him this summer. I know some are worried that playing well will increase the DNA nonsense from the Catalan press, but if that’s the consequence of a young man who grew up in Barcelona doing brilliantly because he’s an Arsenal player, then there’s very little we can do about it. Other than enjoy the fact he’s an Arsenal player with a long contract and very happy here.

England: Jack Wilshere. A man with something to prove this summer. I’m not worried if he gets injured, because if he does we have more time to deal with that and make a decision on his place in the squad. If he plays and does well, then it’s good for us.

France: Laurent Koscielny and Olivier Giroud. Between boos for the Arsenal striker, absences to key men because of injury, and accusations of racism from Eric Cantona and now Karim Benzema, the French squad doesn’t feel like a particularly healthy place to be.

Wales: Aaron Ramsey. People were aghast yesterday when he put up a picture in Instagram which showed he’d dyed his hair blonde. I like it, he’s embracing his inner 90s techno star Scooter. Every nice boy has to go through a phase like that in their lives. He’s doing his with a baby, a beagle and a beard rather than necking pills and dancing topless in a sweaty underground club. Such a pro.

Switzerland: Granit Xhaka has yet to play for us, but we’ll all be watching with great anticipation. Remember when we signed Rosicky and the first thing he did was score a belter against the USA in World Cup? That was exciting. Then he got injured. Then there were two of him. For those who don’t religiously watch the Bundesliga, this will be a first real chance to see him in action and what we’re getting next season. The big question is: what number will he wear? More on that anon.

Germany: Mesut Ozil. I don’t wanna pretend to be one of those football hipsters or anything, but keep an eye on this fella – I’m told he’s quite good.

Poland: Wojciech Szczesny: After a good season on loan with Roma in Serie A, he’s got his international place back. I like Szcz, I have to say. I know he’s not to everybody’s taste, but hey, that’s almost an impossible job these days anyway. Will a good tournament have any bearing on what happens with him this summer? It’s hard to know what the plan is, but I expect some keeper shuffling before the new season begins.

So, that’s it for the Euros, but there’s also a Copa America this summer, taking place in America. I suspect they could be playing to win a Copa. In that tournament we’ve got Alexis involved for Chile and David Ospina for Colombia. That begins at the weekend when the USA will come up against the Arsenal keeper, with a game taking place at the Reese’s Pieces Stadium. So, there’ll be football going on and things to talk about it. Hurrah.

Update: Much like Arsene Wenger, I forgot Joel Campbell existed. Costa Rica are also at the Copa America, so good luck to him. Thanks to José on Facebook for pointing that out to me.

Now, shirt numbers have become a thing we’ve spoken about a lot recently, so it was a bit weird yesterday when having already announced Granit Xhaka as the new number 16 (taking over from Ramsey who has moved to 8), the club announced he’d changed his number already. Now he’ll sport 29 because this is a significant number for him because he was born in 92. Which begs the question: why didn’t he just choose 92?

Also, when you make an anagram of ‘Granit Xhaka number’, you get ‘Marx brain, Huge tank’, the title of a novel by Russian author Fred Tolstoy, who was the seventh son of a seventh son, born on the seventh day of the seventh month in 1877 (1-8 = 7 so you have 777, the number of Satan’s eldest child who was a bit dim and was kept in an attic in Hell). It’s all connected folks, don’t let anyone tell you otherwise.

Right, not a lot else happening, which is good. My head is already hurting from all that crazy numerology and science I just dispensed. Have a good day, I’m back tomorrow.