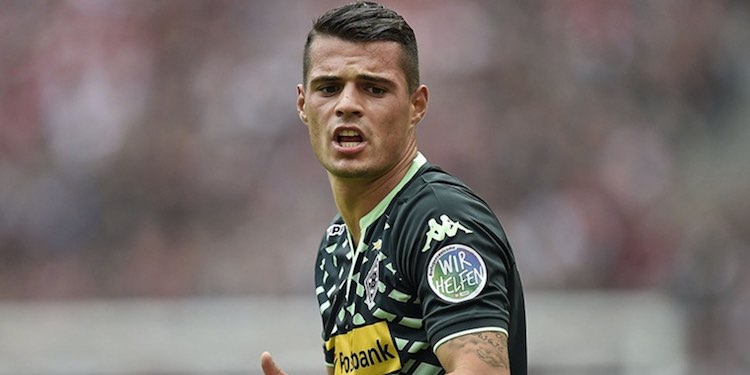 Morning all, a very quick first Saturday of the off-season round-up for you.

The big story this morning is that our first signing of the summer looks imminent. We’ve been consistently linked with Granit Xhaka for months now, and reports yesterday said that he had flown to London to finalise a deal.

There had been conflicting reports of a high bid from Arsenal, then a low bid which, of course, made everyone go – ‘Oh typical Arsenal and Arsene Wenger, trying to buy a player with coins from down the back of the sofa and some flakes of skin in a little baggie which may or may not be scrapings of Jim Morrison’s bunions’.

The BBC report a fee of £30m, while the Guardian say it’s £25m + add-ons (unspecified at this point in time). That’s quite a lot of money, and should the deal go through only Mesut Ozil and Alexis Sanchez will have been more expensive transfers.

Midfield has been a problematic area this season, and the addition of Xhaka adds some physicality to the team, and a little bit of niggle too. He definitely gives referees a chance to flourish their cards, with 29 yellow cards in four years in the Bundesliga – which isn’t a huge amount really – but a fair few reds too.

Only one player has earned more red cards than Granit Xhaka (five) over the last 3 seasons in the top five leagues. Three came in 2015-16

Still, he’s 23 and it seems likes to get to stuck in. It’s worth taking into account that when you are a deep lying midfielder and a big part of your job is to make tackles and prevent opposition danger, you’re more inclined to pick up bookings – it’s the nature of the job. When you also consider the signing of Mohamed Elneny in January, there’s definitely some work being done to our midfield.

The word is there might be an announcement over the weekend, perhaps even today, so we’ll wait and see. But I reckon this is a fine first move into the transfer market this summer. Clearly there’s more to do than this, but if we address one of the key areas early, without much dithering or procrastination, then that’s a positive thing.

I know people will point to the capture of Petr Cech last summer and say we were all hoping that would be the start of something, and that’s a fair point. However, this time around there’s much more work to do. We’ve lost three midfield players already, we’re down a striker because of injury and we needed one even if Welbeck was fit, and there are issues with other potential departures that will have to be addressed through the transfer market.

That is something we can discuss and debate throughout the summer though, for now we can just focus on  Xhaka. Ain’t nobody loves a transfer like I do, and if you can’t be even slightly excited at the addition of tough-tackling, sturdy, left-footed, deep-lying midfielder, then I feel for you. I really do.

For more on the player himself, there’s a good profile here on The Set Pieces that will broaden your Granit knowledge, and hopefully he can become a rock in midfield for us next season. Something something John Stones. Yeah!

In other news that will surprise nobody, Mesut Ozil was voted Arsenal’s Player of the Season. 19 assists, and eighty billion quadrillion and thirty chances created, he was the obvious candidate. Think about next season when he’s threading those through balls to a pacy, lithe, supple and nubile new striker …. oooooh, it’s so exciting.

Gotta say a big thanks to Google Calendar for sending me a reminder this morning:

Yay, cheers for that one. I don’t know if I’ll watch it later on. I probably will, but I still object to the ridiculous kick-off time. It was annoying even when we were in the finals, but you can’t really complain because beer + trophy + football friends is a good day out. However, when you’re not it’s good to hark back to the old days when 3pm Saturday was the ONLY time the FA Cup final took place.

Finally for today, I have to say thanks again to David who helped clean up the audio for this week’s Arsecast. I think I’ve tracked down the problem, so hopefully it won’t recur but it’s down to him that we have a podcast this week.

Also, I had many other emails and messages from people who ‘do audio’ and who very generously offered to help out. It’s very much appreciated and stuff like that is a big part in what makes doing this website such a pleasure – even when the football isn’t always great. There’s a community, I guess, and it’s nice when it kicks into action. ?

So, if you haven’t listened already, it’s myself, @eastlower, @Stillberto and @aallensport discussing the season as a whole, the manager, the players, Leicester, the whole lot. Check it out below.

The Arsecast regular goes into summer hibernation for the most part, but James and myself will continue the Arsecast Extra so join us Monday for one of those. Until then, have a good Saturday, more from me here tomorrow.