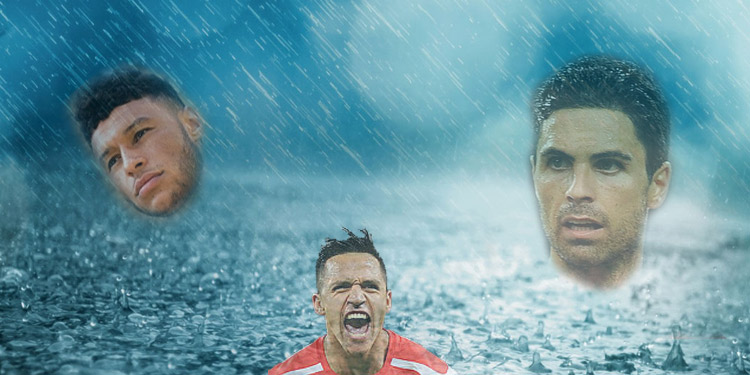 Morning all. And what a miserable morning it is in Dublin. Rain. So much rain. That puts paid to working in the garden all day. Ah well! I think I’ll just make bread instead.

So, a quick round-up of what’s going on because I don’t wanna miss any of this great rain. First up, Alex Oxlade-Chamberlain is out of the European Championships having picked up another knee injury. He was due to play for the U21s on Tuesday night, but suffered the knock in training on Monday.

He’ll be out for 6-8 weeks giving him no chance of being part of Roy Hodgson’s squad. As it was, it was a slim chance anyway. He hasn’t played since February 23rd, and it would diplomatic to say that his performances this season were those of a man really struggling to find any kind of form.

When you consider how the campaign began, scoring the winner against Chelsea in the Community Shield (TROPHY!), it adds to the disappointment. It felt like he was a player really ready to take a leap forward, instead he’s tumbled backwards down the stairs and is now lying on the floor of a dusty basement.

The contract situation that has led to agent-fed speculation linking him to West Ham, Southampton, Man City and Man Utd is still an issue, and it remains to be seen what happens this summer.

“We invested a lot of time, so we will not give up now,” said Arsene Wenger, so it sounds like he wants to keep him. To be fair, the only leverage Oxlade-Chamberlain’s people have over the new contract is the time issue. Arsenal can point to a lack of consistency in terms of performances, and an injury record that is distinctly worrying at this point. We’ll see how this one goes.

Meanwhile, some of the papers are reporting that Alexis Sanchez stormed out of the stadium on Saturday after being substituted. I was told this after the game – he went to the dressing room, got his stuff, and drove off before anyone got back. I deliberated over sharing that information because it had all been so tetchy after the Norwich game, and my Arsenal fan hat was on.

We could have run a big story on Arseblog News, but I discussed with Andrew Allen, and we thought it would probably have been counter productive. I did get in touch with the Arsenal communications team to ask if they had a position on the story, but they replied to say that they had ‘no detail on this’.

So, we sat on it. And now it’s out there. Not great behaviour going straight down the tunnel after being taken off, and even less so by leaving the stadium in a huff. From a man who is usually so invested in the team ethic, you do have to wonder was it just a temporary loss of temper – something we’ve all been guilty of at some point – or something more deliberate and cynical than that?

Reports that his relationship with Arsene Wenger is strained are usually the precursor to a lot of transfer speculation, but also just as likely part of the ongoing contract negotiations the club are having with him and Mesut Ozil. Still, it adds another layer of worry to things as we head into what’s going to be an already fascinating and slightly complicated summer.

Of course Alexis is off the Copa America this summer, with the Frenchman concerned about the physical impact it might have on him. Dare we suggest that in order to offset that, we give him a proper break after the tournament, and not throw him in on the first day of the new season because our injury prone squad has been decimated by injuries? It’s just so crazy it might work.

Further to yesterday’s Mikel Arteta stuff, some nice words from the manager about the Spaniard:

It’s true that he’s out of contract here. As his contract finishes here, it’s a good opportunity to thank him for his contribution not only as a player but also as a leader.

He admitted he could go to Man City as part of Pep Guardiola’s team when he arrives this summer, but didn’t rule out the possibility of him continuing his playing career – even though his last appearance was on January 30th. I could see him as player-manager somewhere lower down, actually.

Wenger also suggested there may be a position for him at Arsenal, saying:

I don’t rule it out. You want your former players to be at the club, but as well you need positions. You can’t create artificial positions. Let’s not forget I have given to many, many players the opportunity to make their licence here, to educate them, after that maybe, to coach somewhere else. But we always open the door to give them an opportunity to be educated. After we need positions available sometimes to offer them a job.

At the moment we go to the end of the season, I don’t know what will happen with the coaches movement as well, we’ll see.

There’s speculation that the youth set-up could be in for more changes, and the future of Andries Jonker is in question. The Dutchman arrived in 2014, tasked with shaking up a youth system that was behind the times, and not producing players of the requisite standard. Although results at various youth levels have been mixed, exciting talent like Alex Iwobi, The Jeff, and others, have emerged so something is being done properly. Again, something that’s likely to be a summer issue – on top of everything else.

Finally for today, if you haven’t had a chance to listen to this week’s Arsecast, it features Amy Lawrence talking about Leicester, Arsene Wenger, the Emirates atmosphere and more, while I waffle about puppies, Francis Coquelin’s weird dimension, monkey Darth Vadar, and lots more. We also go back in time with TS Eliot.

Right. Still raining. Time for bread. So much bread. Till tomorrow.