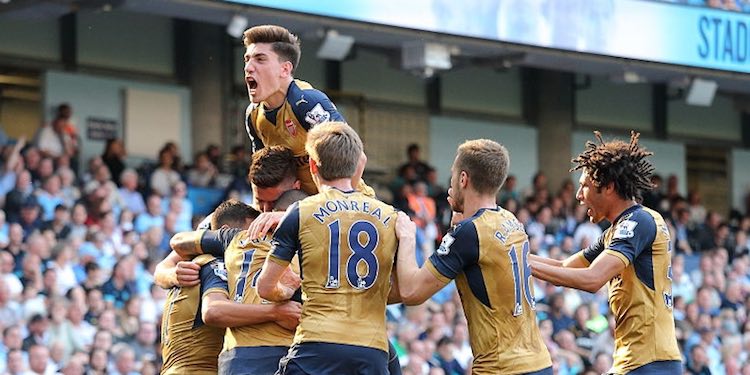 I have to say that when the match was just seconds old and Laurent Koscielny kicked fresh air, I feared it was going to be one of those days. The early pressure came from City and when Sergio Aguero cracked in the opening goal in the 8th minute I thought the worst.

The goal itself seemed quite preventable. Maybe Mohamed Elneny could have done better, perhaps Laurent Koscielny might have tried to block it rather than standing with his arms behind his back like a concierge at a fine hotel, and just maybe Petr Cech could have done better with the shot itself (although it did fizz just inside the post). 1-0 City after 8 minutes – not the start we wanted.

But then Gael Clichy did some Gael Clichy, heading a ball back to Joe Hart that he should have cleared, almost scoring an own goal but giving us a corner instead. Elneny took it, Mangala was marking Giroud then he decided to think about what to have for tea instead, and allowed the Frenchman to thump home a header for his first goal since the Mesozoic era.

I looked up what he cost Man City – £42m! It’s a struggle to make the case that they got value for money there. He is the most expensive defender in the history of British football and his main talent appears to be to make Otamendi look like a competent footballer in comparison. Not that I’m complaining, merely an observation. £42m though. Cripes.

It was not a game of high quality. At one point I thought ‘Ooooh, that was good, we’ve put more than 5 passes together’ and then we passed it straight to one of their players. We lost Danny Welbeck to injury, which was a sad sight, and the initial fears that he’s suffered a tear to his lateral meniscus would be a huge blow if true. That would mean no European Championships for him, and after such a long time out already this season, his head will surely be wrecked about it all. Fingers crossed, it doesn’t look good though.

Jack Wilshere came on to replace him and ran about trying to get into as many 50-50s as possible, but had little impact on the overall quality of the game. There was a Scottish football bit in the second half, head tennis and leathering it back and forth in the air, and then they went ahead through Kevin de Bruyne. It might be just me, but I struggle to cope with situations when a boy who has clearly not yet gone through puberty is allowed to run straight through our defence and score.

Petr Cech was beaten at his near post again, he really should have done better with that one. I did enjoy Niall Quinn on Sky suggest he was only beaten because the pitch had been watered at half-time. That’s what it was all right. It’s not the first time Cech has conceded like that this season and while it’s something to work on, so too is stopping people shooting instead of backing off and inviting them to have a go. Tackles are good.

Having thrown on Walcott for Iwobi, we were about to bring Santi Cazorla on when we got an equaliser. Walcott had just missed a great chance set up for him by Giroud, poking the ball over the goalkeeper but in the direction he was facing – which was, you know, wide. I bet he would have loved life in Roman times, all those straight roads.

But it was Giroud who provided again a minute or two later, knocking back an Alexis pass into the run of the Chilean who finished past Bob Dandruff with aplomb. That was his 17th goal of the season. It’s not been his best campaign by a long shot, but as we look to improve next season, keeping a player who can contribute that many when he’s below par is absolutely vital. We get few enough from the others.

Santi was sad as we then put on Francis Coquelin to see out the game. He came on and gave the ball away a lot, but thankfully City were not really that arsed. Bony hit the bar late on, but the sight of them whacking long balls straight out for goal kicks summed them up. They needed a win, Champions League qualification is out of their hands now. If United win their final two games, City and Pep play Europa League.

From our point of view, I thought it was sensible enough to take the point. We can still finish second, depending on what happens on the last day, but avoiding defeat against Villa will be enough to take third at least. Had we gone looking for a winner and conceded a loser (can you call it that?), the rage would be palpable right now. I don’t think it was lack of ambition, and it’s hardly as if we were dominating and playing well anyway.

It was a very intense game where we had a difficult start because Manchester City came out very strong. We suffered a little, but every time we went down we showed character and came back twice in the game.

Coming back twice is as much to our credit as going behind twice is not. And ahead of the final day of the season on Sunday, he said:

It is in our hands now but we have seen again today that we just want to finish the job with the result. That shows you that we have to focus and keep the focus. It is important to maintain that.

The permutations of that final day aren’t yet fully known due to some midweek fixtures, but we need Newcastle to have something to play for against Sp*rs. If Sunderland beat Everton on Wednesday, they’ll be relegated already, but if they have a home game on the final day to possibly avoid that, it should be interesting.

Anyway, that’s all to come. There’s little else to say about yesterday’s game, other than it felt very end-of-season-ish. City’s fans showed their appreciation for a departing manager who won them a league title by buggering off at the end of the game, although perhaps it was to avoid Samir Nasri’s double denim nightmare – in which case you can’t really blame them. If he were my son I’d frame him for a terrible crime and have him sent down for years.

I guess we’ll have something similar to look forward to next Sunday. These laps of appreciation always feel terribly forced and contrived – this season especially will be a difficult one. It might be a better idea to just leave a greetings card on each seat saying ‘Sorry we were so poo, we’ll try and be less poo next season. Here’s a voucher for a hot dog’.

Right, James and I will be here with an Arsecast Extra for you later on today. As ever if you have questions or topics for discussion, please send to @gunnerblog and @arseblog with the hashtag #arsecastextra. And listen out for some interesting news during this one.