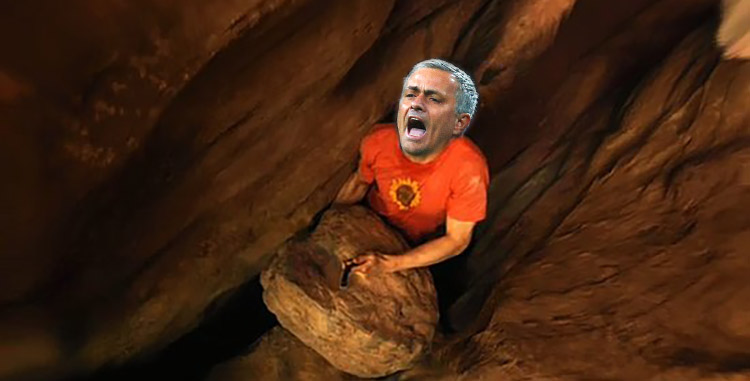 Some might call it diplomatic silence. I think we all know it’s ‘I hope you get eaten by a bear silence’. Sadly, there aren’t too many grizzlies in the Greater Manchester area so our best hope is for Mourinho to take an adventure holiday and end up like that bloke who got his arm caught under a rock for 127 hours but instead of 127 hours it’s weeks and they just find a skeleton because he’s too afraid to cut his own arm off to survive.

The Premier League can once again ‘enjoy’ the antics of the worst man in football as he’ll be named the new United manager. With City under new management there could be fireworks because Pep Guardiola hates him too – and why wouldn’t he? In Ireland we colloquially call a person whose behaviour is poor a ‘gouger’, but Mourinho is an actual, real life, eye-gouger.

If a man can gouge like that in public, what sort of gouging does he do in private? I wouldn’t be surprised if he, fueled by the sycophantic laughter of the press as he behaves appallingly for 9204th time in a press conference, dresses in black at night and gouges the eyes of people sleeping rough on the streets. Then runs off tittering to himself before they know what’s happening.

For those who think United have betrayed themselves somehow by appointing him, this from Ken Early in the Irish Times puts paid to that notion rather brilliantly:

Manchester United started as a football club that made most of its money by selling football matches to a paying audience. That is now a secondary part of the business. United’s most important customers are no longer the audiences that pay to watch the football, they are the corporate partners who pay to be associated with the brand. And the most valuable thing that United sells – the company’s primary product – is no longer the football. It is the audience itself.

The only question that counts is: will people around the world tune in to watch a Jose Mourinho-managed Manchester United? And the answer is clearly yes. A majority of United fans are pleased with the appointment, and even the ones who dislike Mourinho will find themselves irresistibly drawn to hate-watch.

What is interesting is the upcoming court action from Chelsea’s former doctor Eva Carneiro. She’s suing Chelsea for constructive dismissal and has a separate action against Mourinho due to be thrashed out in court in early June. I wonder how inclined Chelsea and Abramovich are to protect him in any way now that he basically ruined their season, dropped them out of the Champions League, and has now rocked up at Manchester United. It certainly adds some layers to it all.

Anyway, next season we’ll all get to ‘enjoy’ that special brand of relentless, supercilious, narcissistic, vainglorious cuntery once again, this time from his throne at the biggest club in England. Won’t that be fun? As for van Gaal, he’s clearly a bit bonkers, but I’ll always look back on his time at United fondly because, well, he was a bit crap but also because he gave us this. Thanks Chewie!

From an Arsenal point of view there’s not a huge amount happening. We’re still waiting on the official announcement of Granit Xhaka which, I suspect, has something to do with the launch of the new kit yesterday. They had to bring that forward because of all the leaks, and I suspect they’re keen on not sharing the limelight at least for one day.

So, do the kit, then you’re free to display that shiny new player in said kit. My money’s on today at some point, but given that it’s just the 24th of May, I don’t think there’s any need to hold our breath. We have just a bit of time to get this one across the line.

From the kit stuff there was also the news that Alexis Sanchez has changed his number from 17 to 7. That’s 10 less. Quite the jump. And hopefully having that 1 off  his back will help him regain his form, fitness, and make him ever so slightly more aerodynamic when he returns from busting his balls in the Copa America this summer.

It also brings a measure of calm to his situation which had seen him linked away, declared unhappy and all the rest. It certainly means that he’s going nowhere this summer, and hopefully what the club do in terms of the transfer market and showing the kind of ambition we’d all like to see will go some way to him signing a new contract.

Ultimately it comes down to whether or not a player feels they can achieve at a club. When you start buying at the top end of the market, as we did with Alexis and Ozil, there’s an added pressure because those guys want to win the biggest prizes every season. Or, at the very least, compete properly. There’s likely been a fair measure of brinkmanship too regarding the recent Alexis stories – those kind of stories appearing the press are part of the normal negotiation process, so fingers crossed they can sort something out asap.

Finally for today, Mohamed Elneny’s goal against Barcelona was voted the Arsenal Goal of the Season. It was a fine strike, one I remember with great dampness, but I think there were better this season. Check our picks for goal of the season, and feel free to chime in with your own top 5.

Finally, if you haven’t had a chance to listen to this week’s Arsecast Extra, we chat about the FA Cup final, Granit Xhaka, kits, a definitive song for the new man, answer lots of listener questions, and loads more. Put us in your ears, you won’t regret it.

Find it on site here, via Acast, or subscribe on iTunes or your favourite podcasting app by searching ‘Arsecast’ or using our RSS feed. Happy listening.