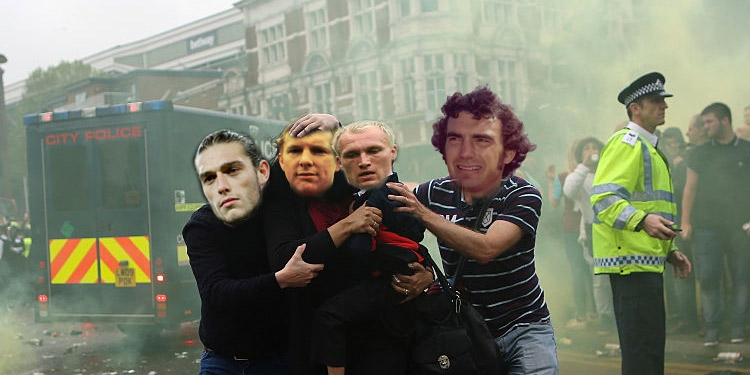 So, West Ham’s win over Manchester United last night means that top four is guaranteed for us, regardless of what happens this weekend. We could finish 4th, or 3rd, or even 2nd, which would be kind of hilarious, but having had Champions League football in their hands after our draw with Man City on Sunday, United now have to hope City lose to Swansea on the final day while they have to beat Bournemouth at home.

The game began late as the United coach was bottled on the way in by West Ham fans keen to pay their respects to their ground, Upton Park, for the final time. Then a 72 foot effigy of Alan Devonshire recited a racist poem and one fan headbutted the bus. Seriously. A man loafed a bus. What a joyous celebration of all that is good with football. Grown men smashing their own heads off vehicles. It does not get more Premier League than that.

That’s gotta be the end for Louis van Gaal now. Even if they win the FA Cup that they’ll somehow conspire to lose, thus making Alan Pardew happy which ought to be a crime against humanity, to blow that chance after City leaving the door open, and going 2-1 up on the night, must surely be enough the decision makers at Old Trafford. I mean, obviously I hope it’s not, but it must be.

From an Arsenal point of view, the news about Danny Welbeck appears to be quite bad indeed. It’s being reported there is ‘significant damage’ to his knee, he’s likely to miss months, and could even require surgery. The full extent of the issue is expected to be known today, but it’s such a shame for a player who really seems like one of the good guys.

I bet Danny Welbeck has never loafed a bus. I bet he’s never punched a tractor. I can almost guarantee you that he hasn’t kung-fu kicked a mobility scooter. And there’s just no way a chap as as nice as he is has upper-cutted a tuk-tuk. He does not perpetrate violence on moving vehicles so for him to suffer another injury blow like this is pretty cruel.

It seems inevitable that he’s going to miss the start of the season, thus requiring us to manage our forward options very carefully. After we sell Theo Walcott to West Ham, let Alexis Sanchez go because he’s got the hump, and someone attacks Olivier Giroud and cuts all his hair off thus rendering him useless like a common Samson, we’re going to have to work something out there.

I’m sure everyone who wanted us to buy back Benik Afobe will be fine as we give Chuba Akpom two full seasons up front to develop into a 15 goal a season striker. No hassles!

Meanwhile, the rumours about Granit Xhaka intensify. The Swiss international, currently with Borussia Monchengladbach, has been on our radar for some time. Earlier this week he said there had been no offers, but last night a local newspaper (for local people) reported that Arsenal had made an official bid of €43m + bonuses for the 23 year old midfielder.

RP Online say that agreement between the two clubs is imminent and so we’ll just wait and see what happens from here. Of course, you can never be sure until the bloke has signed on the dotted line and is holding up the number 8 shirt with his name on the back, but it does seem like there’s a lot going on with this one. With Mikel Arteta, Mathieu Flamini and Tomas Rosicky all leaving the club the summer, there’s a need to reinforce that area, and there’s no doubt Xhaka can.

I do wonder about all the bonuses players receive when they sign. Obviously some are based on achievement, but maybe there are some Arsenal specific ones too.

Finally for today, the Arsenal U21s gained promotion to the first division last night with a play-off win over Aston Villa. Having fallen behind to a goal scored by a young man called Rushian Marcus Amari Hepburn-Murphy – which is pretty amazing – strikes from Chris Willock (a real prospect) and Stephy Mavididi secured a 3-1 win. There were senior players involved too, with Santi Cazorla, Francis Coquelin, Calum Chambers and Joel Campbell all taking part, so that will have done them some good.

Right, that’s just about that. Remember, our week long Arsecast Extra extravaganza continues today. James and I will have another dollop of audio goodness for you. If you have any questions or things you’d like us to discuss, hit us up on Twitter @gunnerblog or @arseblog and we’ll do our best to get to as many as we can. If you’ve missed the shows so far you can find them here or on our Acast page.

Thanks for listening so far, and if you’re so inclined please check out the show sponsors. First up Cornerstone, who will help you shave your face, or any other bits, better than anyone else, with a full money back guarantee. Check out cornerstone.co.uk/arseblog for a £10 discount and more. And if you’re into audio books, signing up to audibletrial.com/arsecast gives you a 30 free trial and a free audio book.

Each one helps us out on the podcast, so it’s very much appreciated. Until later.