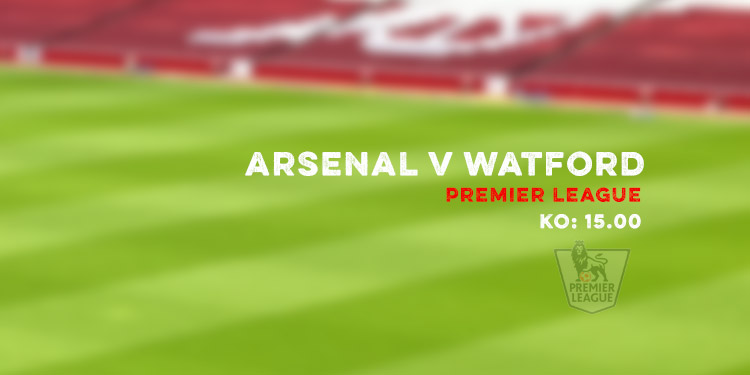 When I woke up this morning I couldn’t move my legs.

Then I looked down and saw that there was a German Shepherd sleeping across them, so the lesson here folks is always remember to shut your bedroom door when you come home at 3am.

Speaking of Germans, wouldn’t it be good if Mesut Ozil did some assists today? Not for him the lengthy process of lying across somebody’s legs to disable their attacking threat. Frankly, it would be quite weird if he lay down across the thighs of Étienne Capoue (whose name really should have an EY sound at the end) or Adlène Guedioura (who should not rocket the ball into the top corner like he did last time).

I don’t think the referee would allow it for a start, and Ozil’s gifts are not so much about incapacitating an opponent as leaving him going ‘Woah, where did that pass come from?’. So, my advice to Mesut is to eschew the temptation of lying down on other people’s legs and instead do that chance creation thing that he’s really good at. He’s too old to change at this point.

What else would I advise today? Well, I would continue with Daniel Welbeck up front because he’s quite good at this running stuff and also the football stuff and the scoring stuff. He’s done well since his return from injury so more of that please. Which is not advice as much as it’s a plaintive plea for him to do things which will make us all happy, but there you go.

Should Alex Iwobi keep his place? I did a recent poll on this and the answers were overwhelming. See the evidence below. If you can argue with a pie chart then you are a better man than I. 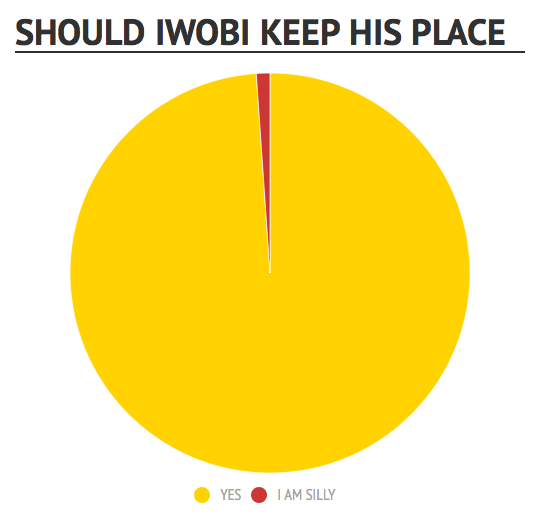 See! He should. Because he’s good and fast and young and lithe and sensual. And he also scored in the last game against Everton, so what kind of message does it send not to play him today? The only reason is if he’s got some kind of injury niggle or ache or strain but I’m hoping that’s not the case. I’m enjoying the fact he’s in the team despite the fact he wouldn’t be in the team if those more experienced than him had played better which would mean we’d be in a better position overall.

As for the rest, if Cech is in full training, then he’s got to play. David Ospina, with his no neck whatsoever, has done well over the last few weeks, but I prefer Helmety O’Toole, and so he should play. The midfield partnership of Francis Coquelin and Mohamed Elneny should get another run out, and I have a feeling today that Alexis is going to do something. I hope it’s score, and not emerge from the human form he’s in and reveal himself to be a monster from another planet, but definitely something.

The Everton performance was about the best we’ve played in months. I’m hoping that we can build on that and get some revenge against a team that knocked us out of the FA Cup the other week. I’m still smarting about that really, but then I’m just thankful that I can move my legs.

Anyway, my final piece of advice for Arsenal this morning is to win the game. It would make things better for everyone if they did that.

Elsewhere, Arsene Wenger says he’s not opposed to Jack Wilshere going to the European Championships provided he can find some measure of fitness before that. He said:

When you’re a footballer you want to compete at the top level and what is important is that Jack, who is frustrated enough, regains confidence. It’s very important for his confidence that he can go to the Euros and he can play.

I don’t really see the problem. If he’s getting back to fitness, some summer football will help him. It’s not as if he’s going to be fatigued after a long, hard season. Let him play and if it goes well then that’s good for us going into the new season. If it doesn’t, or if the injuries flare up again, then forewarned is forearmed and all that. Fingers crossed he’s ok though, because he’s definitely a player who could have made a difference this season.

The manager also spoke a little about rumours linking us with Borussia Moenchengladbach midfielder Granit Xhaka. While not saying anything specific he had that glint in his eye. You know the one. The one that says ‘Sure, he’s a decent player but a 2 year extension for Flamini is where I’m going baby, oh yeah!’.

Genuinely though, I’m expecting us to go BIG this summer. REALLY BIG. But then I’m also still a bit drunk from last night.

We will have full live blog coverage of the game for you later.  If you’re out and about and can’t see it due to to life, kids, family, work, or whatever, we’ll give you up to the second live commentary. Check back later for a post with all the details or bookmark our default live blog page and updates will begin automatically.

Before that, check out this week’s Arsecast in which we talk about football, David Rocastle, and lots of other stuff too. You can listen on site here, subscribe in iTunes or Acast, or search for ‘Arsecast’ in your favourite podcasting app and let me slip inside your ears.

Right, that’s it for now. Catch you later for the game, and come on you reds.

Some defensive solidity would be nice against Watford + Ramsey & Ozil