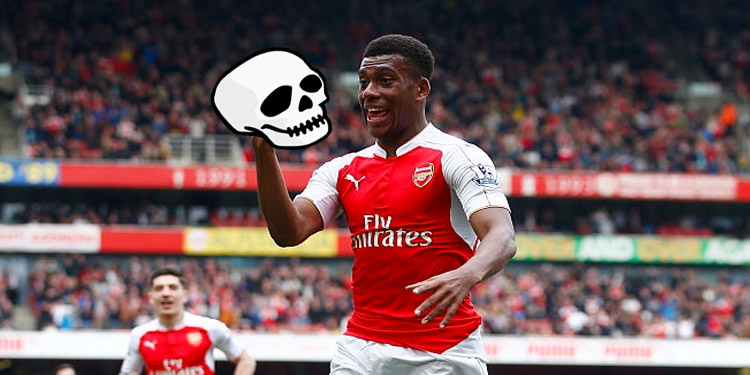 I played my first game of 11-a-side football in ages last night. I’ve been out with an injury so fitness has been an issue. It was supposed to be 3 weeks, it turned into 3 months or more. Which sounds rather familiar, I don’t know why. Anyway, it was good to play again.

However, this morning, as I was waking up, I was trying to figure out when I fell out of a stadium, got run over by a steamroller and then trampled by a marching band playing ‘Louie Louie’*. Goddam, it all hurts a lot. Well, not all. Just my limbs and torso and organs and extremities and skin, but apart from that I’m in perfect condition.

So, apparently we’re in negotiations with Alex Iwobi over a new deal which could earn him £30,000 a week, if that kind of thing is interesting to you. I’m generally not arsed what anyone earns because the figures are ludicrous to me. I counted up my change jar last night after about 2 years of dropping spare coins into it and I’ve got €164 to play with, so that’s nice.

Still, £30,000 a week for Iwobi will buy him some beautiful low-cut socks, that’s for sure. Does he deserve it? What’s that got to do with anything in football these days? The reality is that when a player makes an impact there’s an immediate need to recognise that with new terms because agents will say ‘If he’s not getting it here we can get it elsewhere.’

He signed a new contract last October as his promotion to the first team was made permanent and he started training and working with the rest on a regular basis. Now, he’s shown himself to be an exciting prospect with lots of potential and somebody who has looked better each time he’s played. When you’re contributing more than players earning 10 times as much, there has to be an element of fairness to it I suppose, and I suspect that’s why a deal is in the offing.

For most of us his emergence is a really nice thing. A kid who joined Arsenal at the age of 9 is now blazing his way to becoming a regular fixture in the first team, and scoring some goals along the way. He seems a level-headed, well-grounded young man who is genuinely excited and thrilled about the prospect of playing for the club. What’s not to like?

Human nature being what it is though, there are always some who will find the negative angle. The first one is: Iwobi will be an excuse not to buy anyone this summer.

Like many of you, I would have liked us to do more in the transfer market last season. The money was there, there were players across Europe who could come in and add something to this team and this squad. And there’s little doubt some tough decisions have to be made when this season ends because things that the manger hoped would work haven’t worked at all, and the need for changes in certain areas is obvious.

If Arsene Wenger doesn’t spend that money, or as much of it as people would like, that’s on Arsene Wenger. And perhaps the board, the scouting staff, the negotiators, whatever. I don’t quite get why it has to be framed in such a way that Iwobi is somehow culpable. Would people have preferred that he didn’t score against Everton and get a goal and an assist against Watford?

I realise it has more to do with concern over the manager’s desire to find ‘internal solutions’ and a perceived reluctance to spend money, but still. If Arsene Wenger is parsimonious by nature, it has nothing to do with Iwobi.

The second negative is: Why are we giving him a new deal when players like Oxlade-Chamberlain, Gnabry and others haven’t hit the heights we expected?

Again, a legitimate concern if you think a new contract is going to give him too much, too soon. As I said, he seems a sensible young man, not one who will take all that money, spend it on a party boat and end up hiding behind bins after being kicked out of a nightclub. And yes, there’s always a gamble when you bring a young player through.

Gnabry is a fine example. I remember the performance against Swansea away when he looked really good. I think there was another game at Crystal Palace when he was very impressive as well, but now, his career has not gone the way we hoped it might. A serious knee injury, a loan spell that didn’t come off, and a big prospect is struggling to make the grade.

That, however, is football. There are so many talented, brilliant young players who almost make the grade but for some reason or another, it just doesn’t happen for them. It can be injury, attitude, timing, bad luck, a manager who doesn’t fancy you, a combination of all of those things, or countless other factors.

Take Hector Bellerin, if Mathieu Debuchy hadn’t picked up the injuries he did in his first season, would he be where he is now? We’d like to think so, that his talent and potential – which was sufficient for Arsenal to bring him from Barcelona in the first place – would have been enough, but you just never know.

Ashley Cole was a huge beneficiary from Silvinho suffering injury in the second half of the 2000/01 season, then the fact we discovered the Brazilian had drawn his own passport, before he was swiftly shipped off to Spain that summer. Nice timing, a bit of luck, a player gets a chance and takes it.

We all know and understand the vagaries of sport. Iwobi has started brightly, but right now nobody’s saying he’s definitely going to have a long, successful and glittering career. Just that he has a chance, and seeing that play out over the coming months and years will be either hugely exciting or familiar and mundane, but right now isn’t it worth just stepping back and enjoying it for what it is, rather than focusing on what it might not be?

* My father went the same way