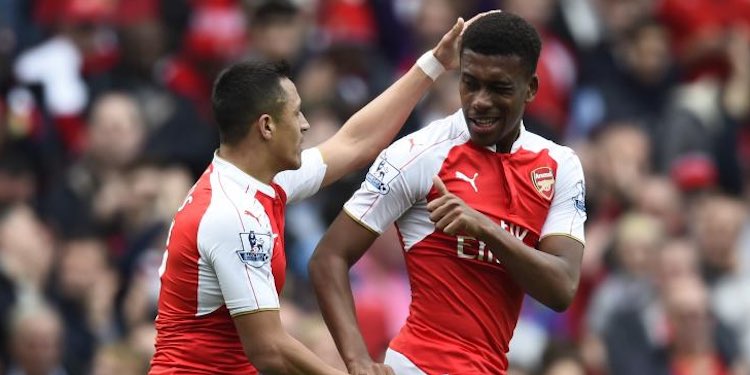 Watford were blown away yesterday. Blown like tiny scraps of confetti in an industrial wind tunnel that they use for seeing if cars are aerodynamic and that. Possibly with some graphical arrows shooting over the car to show that yes, yes it is aerodynamic and that’s designed to make you want to buy one. Personally, I’d be more interested in the comfortable interior and what kind of cool dashboard it’s got, but that’s just me. I wouldn’t even be paying attention to the scraps of paper that were in the wind tunnel for no good reason because what the hell does this even have to do with football?

Nothing. That’s what. But it doesn’t mean Watford weren’t blown away yesterday because they were. Like tiny scraps of – well, you get the picture.

Arsene Wenger kept faith with the same team that had played so well against Everton, and was rewarded by another excellent display, particularly in the first half. A bright start was capped by an early goal. Alexis Sanchez’s header from a superb Iwobi cross was saved by Gummy Gomes, but the Chilean was there to tuck home the rebound.

The move to the right has made a difference to his game. It’s still not quite as sparking and effervescent as it was last season, but there are myriad reasons for that. However, there are signs that he’s finding his spark again, and he set up the second goal with a lovely cut back for Iwobi. The youngster’s finish was emphatic and more than deserved.

He’s slotted into this team beautifully and there’s this fantastic connection with Danny Welbeck that was apparent yesterday throughout the game, the first half in particular. It’s his second Premier League goal in just his second Premier League start. I like his ratio right now, long may it last. I also liked the fact that the second goal came at time when Watford were just beginning to get into the game a little, and it knocked them right back on their arses.

They made a first half substitution for tactical reasons, which is always nice to see, and another at the interval, but we began the second half as brightly as we did the first. Hector Bellerin’s left footed shot deflected past the keeper and in to make it 3-0, and from there the game was more or less done and dusted.

I would have liked to see us really turn the screw a bit, but I suppose to some extent we’re still finding form after what has been a pretty dismal run, so I don’t suppose we can complain too much. They had a shot and Ospina made a really good save. We brought on Giroud, Walcott and Campbell for Welbeck, Iwobi and Alexis, and late on we got a goal to put some icing on the cake.

Ozil released Campbell down the left, he drove into the box past the bloke who got the hump with Ozil being brilliant so booted him up in the air, and crossed it for Walcott to finish from close range. 4-0, and that’s that, thank you very much.

We played well. We had a good flow in our game and a good desire to play. Our technical quality was high and we combined the fact that we played well and that we could score as well. In the FA Cup defeat we had the same domination but we couldn’t score. That makes a big difference.

Efficiency in front of goal has been an issue all season. We simply haven’t converted anywhere near as many of the chances we’ve created, so it’s hardly a surprise that when we do that results are favourable. Also, some might suggest this was a classic example of Arsenal playing well when the pressure is off. While there may be some truth in that, it’s immeasurable because we can’t see the weight of that pressure.

What I would say though, is that having a functional midfield and a front three who are mobile, dynamic, quick, strong and connect well together, probably has more to do with it. The Coqeneny partnership in the centre of midfield works really well, and Egyptian in particular is fast becoming a very important piece of this latest Arsenal jigsaw.

He made 122 of 127 passes yesterday. He’s like a kind of Arteta/Cazorla hybrid in terms of what he brings to the midfield, and there’s no doubt the team is better for having a player like him in it. Mesut Ozil was sublime at times yesterday, and there’s more creative freedom for him, and that front three is really exciting to watch.

Welbeck’s power, pace and movement is such a breath of fresh air, and he was unlucky not to be on the scoresheet himself yesterday. Alexis I’ve covered, and that just leaves Alex Iwobi. I suppose we have to be careful not to go overboard, he’s young and obviously still learning his trade, but he’s so much fun to watch.

Not just the magic jazz-hands he’s got as he looks for a pass, or the low-cut socks, but the maturity and intelligence he plays with that belies his relative inexperience.

Arsene Wenger admit his emergence is a bit of a surprise, saying:

It’s surprising how quickly he’s integrated into our game. He’s worked with us since the start of the season and he has grown, gained confidence and when he came in he had an impact straight away. That’s benefited from the fact that he knows everybody and they trust him as well. I didn’t expect that level of efficiency or impact on the scoresheet.

Even if it is a surprise, it’s a very welcome one, because who doesn’t love an Arsenal educated kid coming through the ranks and making this much of an impact? The ovation he got when he was taken off yesterday speaks volumes and as long as he keeps doing things the right way, there’s a big future for him at this club.

So, all in all a good day for us. A fine performance, an emphatic win, and Sp*rs dropped a couple of points too which is very welcome. We could do with Leicester doing something similar today, so fingers crossed on that one.

Due to stuff and things, James and I will be recording the Arsecast Extra this morning. It’ll be available for you as ever tomorrow, but if you have questions or things we should talk about, you know the drill. Send them to @gunnerblog and @arseblog on Twitter, hashtag #arsecastextra.

In the meantime, have yourselves a good Sunday. More tomorrow.