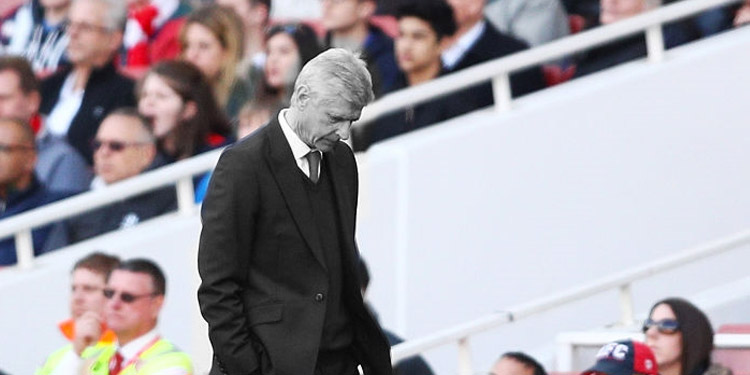 I saw a Tweet this morning in which former Arsenal player turned Sky co-commentator, Alan Smith, said there’s an ‘air of apathy’ around the club at the moment. The many empty seats yesterday, which allow for some luxuriant stretching out should one desire, don’t do anything to counter that point of view. The game was ‘sold out’ which meant lots of people just didn’t bother turning up.

It was present on the pitch too, players who seemed to be going through the motions for the most part dropped more points against mediocre opposition. The football was poor, as it has been for most of this season. In seasons past, with far less accomplished players, there was a certain style to the way we played. It didn’t always work, and in fact it was the cause of our problems in many ways, but at least it was there.

Now, it’s hard to know what we’re supposed to be doing. Performance wise, it was crap. Crapathy. That’s where we are.

We scored in first half injury time, Danny Welbeck providing a nice pass for Alexis to nod home over the keeper, and from there I thought we’d turn the screw in the second period. Palace had no ambition really, happy to sit deep and maybe get something from a set-piece. We generally defended them quite adequately.

We had a lot of the ball and did very little with it. The closest we came to a second goal was a lovely bit of improvisation from Ozil, taking a quick free quick when he spotted Alexis making a run, the header drifted just wide. There was a save from Welbeck and not much else to worry their keeper.

Still, Palace were hardly causing us problems, so we decided to hit them with blast of insipid to see if they’d like something from the game. We’re just that nice. Gabriel let Adebayor run down the line without so much as a bump or a tackle, Coquelin allowed Yannick Bolasie the chance to shoot from distance, and Petr Cech allowed the shot to slip in at the near post. I like Petr Cech a lot but that was bad goalkeeping, no two ways about it.

Having already brought on Aaron Ramsey and Olivier Giroud for no other reason that it seemed like a nice thing to do, our answer to letting slip another stupid goal was to throw on Theo Walcott. At least he provided the one outstanding moment of the day. Sadly, it was a comedy moment, rather than a football one as, with his first touch, he was so bewildered by all the time and space and options he had he simply ran into two opponents, fell over and lost the ball.

Not that the result was in any way Theo Walcott’s fault. He came on in the 85th minute so he was a very small cog in the Arsenal machine yesterday, but that bit just kinda summed up what we’re about right now. There was the chance to do something incisive or exciting, instead we just fell over. Our title challenge encapsulated by a footballer left sitting forlornly on his £140,000 a week arse, arms in the air protesting as if it was someone else’s fault.

I’m very disappointed. It is one of those days where you don’t like to do a press conference after because it is not pleasant. Despite the high level of possession we had, we did not create enough chances.

Mesut Ozil created 8 chances on his own, by the way. 16 chances created in total. Now, not every chance is a one on one with the keeper from which we should score, but this wasn’t really about how much we created, it was about throwing away another lead and dropping more points. Wenger goes on to say:

Sometimes you have to win 1-0 and today was one of those days.

Except we didn’t. And there can’t have been anyone who was in any way surprised by what happened or how it happened. Our soft underbelly was exposed once more, and the callow, tedious inevitability of it was so predictable as to be laughable. Except it’s not really very funny, because in the pantheon of great Arsenal title bid failures, this one is right up there with the worst of them.

Top of the table on January 2nd, leading Leicester City by 2 points, to be 4th on April 18th a whopping 13 points behind them is an unforgivable place to be. Choke. Collapse. Disintegration. Whatever you want to call it, it’s simply not good enough for a club that purportedly has ambition and craves success. We talk about how we want to win things, how we could be up there with Bayern Munich, but we don’t act like it.

Not off the pitch, where you can display your ambition with clever, efficient squad building; or on it, where we’ve shown precisely how much we want to win things by dropping points and losing games because of our own carelessness and stupidity. So much of what goes wrong for us is down to not doing the basics right, and if a manager can’t get that from his team then you’re in a bad place.

Some will point the finger at the players, saying they’re the ones not doing it when it counts. On the pitch, when the whistle goes, they’re the ones who have to play and from there the manager can do little about it. He can’t tackle Bolasie, for example. Yet that outlook absolves him of the responsibility he has. First and foremost they’re his players, every single one bought or promoted from his Arsenal set-up. It’s his job to prepare and motivate them, and if they’re not able to do what he wants them to, then that’s his fault because he picks them.

He spoke in the post-game press conference about doing more than top four (a position which, if we don’t manage to get our act together quickly, isn’t a foregone conclusion by any means). He said:

As long as you don’t win every game, you want to add what is needed. I’m responsible for the result and I think I’m the first person who is frustrated. I can say that at the moment, we will make complete balance at the end of the season and see where we stand.

Knowing the way Arsenal is run, and the lack of appetite there is for change at board level, the glimmer of hope is that come the summer the spending will be big and plentiful and tough decisions will be made about underperforming players. Wipe the slate clean. Start again. Get rid of the bad and replace it all with good. That’s the panacea. That’s what will make us great again.

On the other hand, given that consistent issues of ability and mentality have persisted for years with very different groups of players, isn’t there also the very real possibility that this would just provide Arsene Wenger with a new batch with which to fall short?

Hurrah, we’ve spent big. But boo, they still let in soft goals and are too nice and lack the things you need to win the league. I think that’s a more likely scenario than a ‘world class striker’ or a midfielder coming in and making everything right in the Arsenal world.

I think it’s why Arsenal need a new manager, and I think a large part of why there’s an air of apathy is because we all know it’s not going to happen. And so, we find ourselves embroiled in the familiar embrace of a challenge to finish in the top four. Hello top four my old friend.

James and I will have an Arsecast Extra for you today. As ever questions/topics to @gunnerblog and @arseblog with the hashtag #arsecastextra.