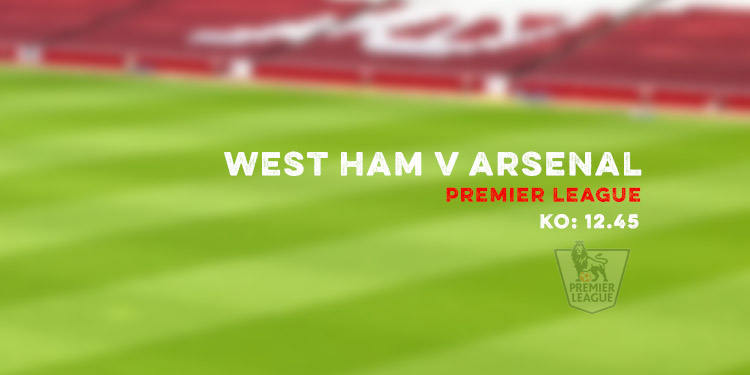 It’s a final Premier League trip to Upton Park today as we face West Ham in the early kick off. Next season they’ll be playing in the new Olympic stadium, and given their current league position they’ll be hoping they can start off at the new ground with Champions League football.

They’re just 3 points off the top four, so we know fine well they’re going to be up for it today. They’re also looking to do a double over us, having won at the Emirates on the opening day of the season. On that day Petr Cech endured something of a difficult league debut for the club, and he’s the only change I envisage to the team that beat Watford so well last weekend.

Unless there’s some injury issue we’re not aware of, it wouldn’t make much sense to change what’s been a winning formula in our last two games. The midfield is working, the front three is full of running and goals, so why mess around with it?

Today will be a bigger test than either Everton or Watford. West Ham have been playing well all season, they come into this one unbeaten in their last 9 games, and the last time they lost at home this season was on August 22nd when they went down 4-3 to Bournemouth. Suffice to say we’re going to have to play very well to take three points today.

They work hard, they’re physical and they have some very dangerous players. Dmitiri Payet’s free kicks are eye-catching, but their threat goes beyond that. It will mean the midfield due of Francis Coquelin and Mohamed Elneny, as well as the back four, will have to be very aware of the tackles they make in our half.

From an Arsenal point of view though, we’ll be looking once more for the pace and running of Alex Iwobi and Danny Welbeck to cause them problems. Alexis Sanchez looks like he’s finding some form again after a season in which he admits injury has inhibited him, and behind them Mesut Ozil can pull the strings and make the chances.

All in all it’s set up to be a fantastic London derby. Given our league position, and the fact Leicester are going to hammer Sunderland later today, it’s a game from which we have to take three points. But then I think we knew that to be true of all our games in this run-in.

Elsewhere, the manager admits that Theo Walcott has not developed as well as he would have liked as a centre-forward, despite a couple of good performances there. It seems to be something that’s playing on Walcott’s mind, because in a recent post-match interview he suggested he’d be happy now to play on the right, having agitated so long for that central role.

The indecision is something Wenger talks about, saying:

And if you’ve read Tim Stillman’s column this week, it’s interesting to hear the manager talk about Walcott and Giroud:

I think recently he has gone through a much more difficult period. But he will come back. He works very hard, he puts the effort in in training. At the moment, for him and Giroud it’s a bit more difficult, but that’s part of the competition.

For me that moment when Walcott said he’d be happy on the right having made such a fuss about playing as a striker was tacit admission that he knows he’s not going to play as much as he’d like up there. He certainly can be effective, the Man Utd game was fantastic, but those performances are the exception rather than the rule.

Come the summer I’m very much of the opinion that if we can get the right price for him, and sign somebody better, then that’s what we should do. However, it’s fair to point out that’s pretty much my stance on almost every player in the squad. I do think we’ve reached a fork in the road with regards Walcott though.

He’s not really a right winger, as evidenced by the manager’s reluctance to use him there over the last 12 months, and the comment about the required defensive work is very pointed. He’s definitely not a left winger, and he’s an occasional centre-forward. At 27 he’s still young enough to command a decent fee which could be reinvested (haha), but whether anyone will take on those £140,000 wages is another question. I suspect the influx of TV money will help though.

Anyway, that’s for the summer. Watch Walcott come off the bench and score today to confuse me even further. It’s going to be interesting to see how this one plays out though.

Finally, there was good news as Jack Wilshere and Tomas Rosicky played for the U21s last night. Wilshere did over an hour, Rosicky 45 minutes, in a 3-1 win over Newcastle at the Emirates last night. Fingers crossed there are no ill-effects afterwards, and can continue to make progress.

Right, that’s just about that. There’s still time to listen to this week’s Arsecast in which I chat to Danny Karbassiyoon about his new book – details here. You can win one of two signed copies also, and there’s an hour of aural goodness and waffle for you.

Remember, we’ll have full live blog coverage of the game for you. Check back later for a new post with all the details or bookmark our default live blog page and updates will begin automatically.

Until then, and come on you reds.

West Ham preview: One last push before the Interlull