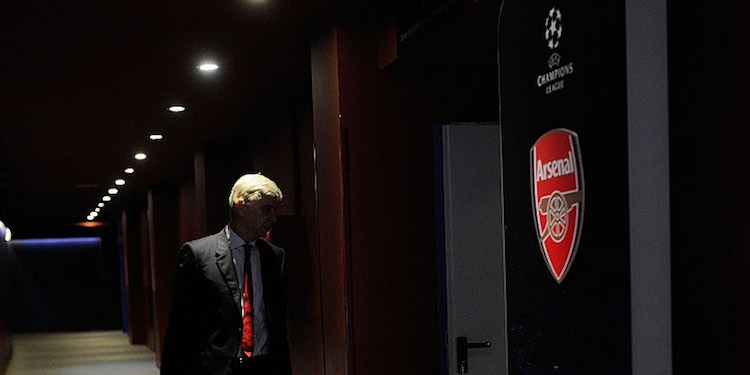 Morning all, welcome to a new week and welcome to an Interlull. Perhaps a timely one, as we might come back with a couple of extra players if injuries heal the way we might like, and the chance to regroup and take stock of what’s going to be a curious, if probably predictable, final couple of months of the season.

It’s as you were at the top after this weekend. Wins for Leicester and Sp*rs mean we’re 11 and and 6 points behind them respectively, although we do have a game in hand. All we can do is try and win, and hope two teams that between them have lost as many as we have this season suddenly hit a wall of some kind.

Even the most optimistic, glass half full, fan would surely struggle to make a good case for that happening. Of course you never know in football, anything can happen blah blah blah, but it would be in the realms of preposterous if it did.

Focus this morning will be on some comments from Arsene Wenger after the Everton game where he seemed to point the finger at fans for a lack of support in recent weeks. He referred specifically to the 2-2 draw with Sp*rs as a game that should have garnered more praise from fans, saying:

What hurts me is that at the important moment of the season we played in a sceptical environment. I think after the Tottenham game where we played a very good game with 10 men against 11 and came back to 2-2, I couldn’t understand why – at the moment when you need everyone behind the team – we had to hit that storm.

From the media, OK. From our fans? It is a bit more difficult to take.

I never complain about critics, especially when they are turned against me. But we have to get the fans behind us with our attitude, and make sure that they stand behind the team until the end of the season.

I think there’s something interesting about the way Arsene Wenger has been talking in recent weeks. He’s a man who is long enough in the job to know what way people are going to respond to what he says. Take the quotes last week in which he said:

I built the club, and the way I did it was with hard work. I had no external resources. Compare the club when I arrived and how it is today. It is moved forward, and without any help from anybody.

They provoked some anger from people who took them to mean he was dismissing what came before, as if Arsenal only existed under Arsene Wenger. Yet we know fine well Wenger is aware of the history and traditions of the club, he’s referenced them countless times, and has always said they’re an important part of what makes Arsenal great.

So, was it just a clumsy turn of phrase to talk about his time at the club, in which he has done a lot to move Arsenal into the modern era? Or perhaps a more deliberate choice of words to stick it a little to his detractors. I think probably the former, as he’d credit people with that much nous, but he must also know in this current climate that anything that might raise the hackles is to be best avoided. And there’s no escaping the fact it was a poor choice of words.

Similarly, he must know that fans are hugely disgruntled. It’s apparent at every game, in every section of the media, in every press conference, and the reason for that is our form, and the fact we’re heading into the final stretch of the season looking for miracles to overtake Leicester and Sp*rs, for goodness sake. We’re not behind the big spenders and the established Premier League winners, but two clubs with no pedigree at this end of the table at all.

Fans feel like a massive opportunity to win the league has been wasted, and that’s why there’s so much unrest. Some of it, of course, goes too far. I regularly see comments from people who say they want us to lose. I see comments from people who say that even if we’d won the league this season they’d want Wenger to go. It shows that even a manager doing exactly what they want another manager to do isn’t enough.

There’s a poisonous undercurrent of disenchantment that even genuine success won’t wash away. We have an atmosphere that begets faux celebrities enjoying their 15 minutes of fame with banners taken out after we win games, and fans fighting each other in the stands. It’s amplified and multiplied by the 24/7 debate and analysis, but ultimately what drives it? Performances and results.

If Arsenal were sitting 6 points clear of Sp*rs and 11 clear of Leicester at this point of the season, things wouldn’t be this unpleasant. That is the reality of it. We were top of the table on January 3rd, in a good position to kick on – even after a typically disastrous November, but since then have taken just 13 points from the last 30.

It’s a collapse that has most likely cost us the title (miracle of miracles aside), and that’s what’s created the ‘sceptical environment’, that the manager mentions. Even that Sp*rs game could be looked at as a microcosm of the season. 1-0 up and doing well, we self-destruct with a needless red card and concede twice, but we’re supposed to look at the point gained as something to celebrate?

Don’t get me wrong, I’d rather have had the point than none, but when we needed this team to really take their chance and go and win, we folded like a house of cards. It was in our hands in January, it was out of them by the end of February, if not sooner. That, and the mind-numbing familiarity of this scenario playing out once more, is what is affecting the fans.

Been there, done that, worn the t-shirt.

And Arsene Wenger, of all people, knows that. He knows we’ve seen it before, because he’s presided over it before. He also knows how important it is to have fans behind the team. In the wake of other bad results and difficult atmospheres, he’s said more than once that it’s up to the team to perform in a way that lifts the crowd.

In some ways it’s the classic chicken and egg situation. Do fans lift the team or should the team lift the fans? It’s not an easy one, but I think we saw for the Swansea game that people have basically given up on this team. If we had won that game we’d have been much more in the title race, but thousands simply didn’t show up. They reckon they know how this one ends.

But the manager must also know that even mild criticism of fans in a state of high dudgeon isn’t going to be received well. Maybe he feels personally affronted by the criticism, but wouldn’t something like this have been more beneficial?

“Yes, we know results have been poor, but there are still 8 games to go. We’ll keep fighting and doing our best. We need the fans support, and we hope they’ll be behind us for those games.”

Not the most eloquent, I know, but it’s early. When 5 of last 8 games are at home, what on earth is the thinking behind those post-Everton comments? Again, was it a clumsy choice of words, or something more pointed?

Because bar the people who think want Arsenal to lose because it might bring about ‘regime change’, fans want to be behind their team. They want them to win, to perform, and to play well. But they’re also only human and when you see them blow the best chance of winning the league most of us can remember, with the traditional big teams having dreadful campaigns, it’s bound to cause frustration.

It just strikes me that it’s at the very least counter productive to lay blame on the ‘sceptical environment’ without any genuine acknowledgement of the team’s failings – something for which Arsene Wenger is ultimately responsible.

We know he’s not a man who will lambaste his team in public, beyond the perfunctory post-match comments about lacking this or that, and even if some of them take it too far, the same should apply to the supporters.

Blimey. James and I will have an Arsecast Extra for you today. If you have questions or topics for discussion, please send to @gunnerblog and @arseblog with the hashtag #arsecastextra. We’ll have the podcast available around lunchtime.