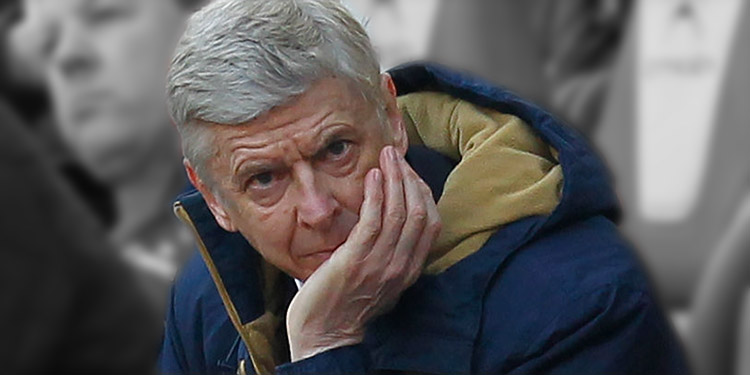 It’s hard to know what to say any more. Our hold on the FA Cup was relinquished yesterday. We blew the chance of an historic three in a row – a potential achievement that had become more and more like a life preserver for this season.

There’s always a visceral reaction when you lose, and when a game takes on the added importance that yesterday’s had, it can go to places it really shouldn’t. For my part, I can only speak to a weary resignation because that’s about as much as I could muster.

Yesterday was a microcosm of our season and the football we’re trying to play right now: Lively in patches but basically unproductive. For the 10th home game in all competitions we failed to take a lead into the half-time break (via @Orbinho). What little cohesion there was at the beginning of the game had well and truly gone by the second half, a collection of individuals not knowing what they were supposed to be doing, and how they were supposed to be doing it, careered around the pitch with no discernible plan, and although we got one back, the late miss from Danny Welbeck perfectly captured our wastefulness in front of goal.

The team, such as it is, is a shambles right now. It’s like no Arsene Wenger side I’ve seen before. We’ve been through some difficult periods down the years, but at least there was always a sense of what we were trying to do and how we were trying to do it. We can discuss individuals being poor all we want, but this isn’t about one or two players not producing, this is a malaise that is spread across most of the squad. Few players are playing anywhere near their potential, and that’s not just an unfortunate coincidence.

It is the job of the manager to assemble these guys and get them to play football the way he wants them to: right now Arsene Wenger doesn’t seem capable of doing that. The stats are dismal. Just four wins from our last fourteen games, and two of those have been FA Cup ties against lower league opposition. We’ve lost three in a row at home. We’re not scoring enough, we’re shipping too many at the other end, and as I said the football we play is a mess.

We’re an orchestra all playing different parts of different songs at different tempos. And there’s definitely one lad standing at the back playing the recorder really, really loudly, wearing a jumper (on backwards) with his name stitched into the collar of it by his mum.

We should have played most of yesterday’s game with 10 men, Gabriel lucky to get away with a ridiculous two-footed challenge on Troy Deeney. Had that happened the other way around, there wouldn’t be an Arsenal fan with a voice left this morning from shouting at the injustice of it. I’m all for fully-committed players, and I think we are far too nice at times (once more putting the ball out so an opponent can get treatment for example), but you can’t ‘tackle’ like that.

We had chances in that first half too. If Mohamed Elneny’s energy and movement was one of the few positives on the day, his finishing let him down badly. He slashed one high and wide from close range, before ballooning another over the bar after great work from Mesut Ozil and Joel Campbell had set him up perfectly.

Elsewhere Giroud and Alexis continued to be each others Kryptonite, and then early in the second half Watford went ahead. Ighalo turned Gabriel far too easily after we failed to defend a bog-standard throw in, and he finished from close range. The second goal came after Ozil lost the ball with a heavy touch in midfield, they came forward, the ball was eventually laid back to Guedioura and he blasted the ball like a missile into the top corner. An amazing finish but Gibbs and Coquelin doubled up on one man, and left all the space in the world for him to run into to to have the attempt in the first place.

The manager then hooked Giroud, Campbell and Elneny (the latter two unlucky in my opinion), for Iwobi, Welbeck and Walcott. It didn’t change much initially, bar a couple of bright moments, but an Ozil backheel set Welbeck through to make it 2-1 from close range. The England man then had the chance to equalise after an Iwobi shot had hit the post, but he couldn’t get his foot around it – the ball missing the top corner by a foot or so in an almost comedic illustration of our travails right now.

That should have been the moment that got us a replay, but in truth defeat wasn’t simply down to that miss. It was simply the latest in a series of performances that haven’t merited any other kind of result, although afterwards Arsene Wenger was not inclined to acknowledge that in any way.

Our long, long run has come to an end in a very sad way because I don’t think that we deserved to lose. You’re always in the middle of a drama, it’s becoming a farce. We have lost a game, we are sad, and we want to focus on the next game.

You know Arsenal have lost games in their history and we lose again in the future, and we have to stick together and cope with it and prepare for the next one with a complete belief.

Taken in complete isolation, you could possibly make the argument that this wasn’t a result that merited such a vociferous reaction. Our first loss in the FA Cup since losing 1-0 to Blackburn at home in February 2013. Two cup wins since then, and elimination in the quarter-final. A very decent record in one competition.

But the reaction wasn’t just about the FA Cup. It’s impossible to compartmentalise it like that. Indeed, you can even think it’s been quite an enjoyable trip in this famous old competition yet despair at what this latest defeat means.

Watching the performance, waiting for the inevitable missed chances to come back to haunt us and for the opposition to show a level of efficiency in front of goal that is seemingly beyond us, felt like having to sit through an episode of a TV show you’ve seen again and again and again. Watford scored from their only two shots on target, I don’t know how many we had, but given our conversion rate, it wasn’t enough.

How many times have we seen that one unfold, especially at home? How many more times are people willing to sit through it? How much longer can Arsene Wenger preside over these performances that are ultimately proving fatal to our chances of success?

I think we know that there’s little or no appetite for change at the upper echelons of the club. Not unless things go horribly, horribly wrong from here. And that’s not something that’s beyond the realms of possibility. If, for all the preparation and planning, he can’t get his team ready to play and perform in an FA Cup quarter-final at home, how does he rouse them to try and get something from a season in which the possibility of a trophy is now remote?

In fact, you could make the argument that it has already gone horribly wrong. Here’s the league table from January 2nd:

If Leicester beat Newcastle at home tonight – and given the respective forms anything else would be a massive shock – that gap will be 11 points. How much more horrible does it have to get?

On that basis, the manager’s comments about the post-game feedback being a farce are terribly misguided. I think we all understand his desire to try and maintain some modicum of positivity, but to rail against the reaction rather than the performance is deflectionary and counter-productive.

And I don’t quite know how he’s going to make it better. He might well do that, it’s certainly not beyond him or these players, but right now I just don’t have any faith that he or they are capable of turning things around. And it’s very sad to see.

James and I recorded the Farcecast Extra last night in the wake of the game, so it’s very much stream of consciousness stuff. I’ll get that available for you as early as possible this morning.