Football teams tend to go in cycles and, as such, squads have a distinct shelf life. Usually that shelf life stretches over a few seasons and the nucleus of a team stays relatively static within the framework of an individual campaign. Not so at Arsenal, where injuries force the manager into constant revision of the team’s fabric. The personnel is unintentionally fluid, therefore its modus operandi becomes malleable too.

This is one of the reasons that Arsenal’s seasons often take on a schizophrenic feel. This year, the team is shedding its skin for a second time and evolving into its third identity. The first model, developed in early autumn, saw a Coqzorla base flanked by Ramsey on the right, with the kinetic presence of Theo Walcott upfront. The injury hex robbed that side of Coquelin, Cazorla and Alexis and the Gunners had to re-stitch the seam of the starting XI.

In truth, it was held together with prit stick and staples. The Flamsey base proved flimsy, The Ox and Joel Campbell blew hot and cold out wide, whilst Giroud and Özil flickered more dimly than usual. With the gradual return of Alexis, Coquelin and now, in some style, Danny Welbeck, the Gunners side is entering its third age of the season. So how will the (hopefully) final part of this trilogy function? Well, I think we have already seen some clues from recent games.

Arsenal are clearly going to become more direct. This is largely borne of necessity. Most of Arsenal’s ball players are in the infirmary, so they have made a decision in the last few games to bypass midfield entirely and play to their strengths. It’s not quite John Beck’s Cambridge or Dave Bassett’s Wimbledon, but it’s hardly the svelte stylings that have become so closely associated with the name of Arsene Wenger over the last two decades.

Shorn of Arteta, Cazorla, Wilshere or even Rosicky, Arsenal do not have a ball player or even ball carrying central midfielder to speak of. Usually, Wenger’s sides like to receive the ball from the centre halves and build through the centre. But the team doesn’t currently have the players to do that, so they have looked to get the ball wide early and build pressure from there. Adrian Clarke illustrated this tactic in his breakdown of the Leicester match.

Arsenal’s top 3 passing combinations for the stoppage time win over the Foxes all involved giving the ball to Alexis Sánchez. Arsenal’s top 2 passing combinations at Bournemouth saw Arsenal players funnelling the ball to the Chilean (the third most frequent combination saw Alexis passing to Özil). You have to go down to the 15th most frequent passing sequence before we see an Arsenal centre half passing to a central midfield colleague in the Leicester match. (Per to Ramsey). 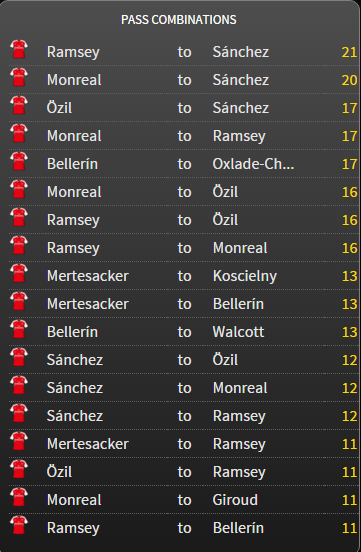 Most of the other combos involve getting the ball wide as quickly as possible, and mainly to the left. Arsenal have passed the Dutchie to the left hand side and set up tent next to Alexis. Ramsey and Özil have gravitated over to that area of the pitch to create triangles and overloads, with Nacho Monreal riding their coattails. Likewise, Giroud has infiltrated the channels on that side of the pitch too. Danny Simpson’s second yellow card on Sunday saw him drag Giroud to the ground in the long grass of the left wing. 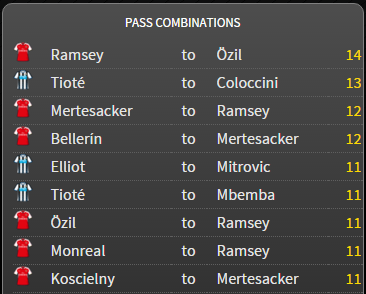 This is why I expect Olivier Giroud to remain a fixture in the team until the season’s end, fitness permitting. Wenger has an odd relationship with Giroud, he has flirted with other options- Walcott, Alexis, Podolski, even Sanogo- during the smouldering Frenchman’s tenure. But Arsene just can’t quit Olivier. Injuries, or the short term need for results always see him crawl back for more. Giroud isn’t the dynamic striker that I think the manager wants, but he has become a reliable crutch. Much like that reliable hit of morning caffeine for the bedraggled office worker.

A willingness to get the ball forward quickly has defined this third imagining of 2015-16 Arsenal. Their directness can be glimpsed by the nature of the goals they have scored. Giroud knock downs from aerial balls have been midwife to goals in the last two fixtures. Alex Oxlade Chamberlain has ousted Joel Campbell recently for two distinct reasons. Firstly, because he is more direct and that suits the thrust of Wenger’s new strategy. With much of the team’s play focused heavily on the left hand side, Campbell’s skillset is no longer as valuable on the right flank.

Campbell became useful because he provided technical counterbalance. However, being Arsenal’s right winger is a lonely gig at the moment. Campbell is secure with the ball and prefers combination play, beating a full-back with a well-executed wall pass. Since Alexis returned, all of his mates have shifted to the left, so when the ball does break to the right, there is nobody for Joel to combine with. Though he can be erratic, The Ox can at least fend for himself in this regard. That is to say, he can take on a man and get a cross in.

Likewise Héctor Bellerin. Neither player really craves this kind of combination play. Campbell likes to tease pockets of space, but he doesn’t burst into it with the ball at his feet. He’s a prober. Joel would not have scored in the emphatic manner that Chamberlain managed against the Cherries. Walcott’s equaliser against Leicester emanated from a Bellerin cross from the right. Hector received the ball and was able to act quickly to swing it into the box without prevarication. As a result, Theo had license to move away from him and get into the area himself.

This is not intended as a critique of Campbell you understand. He became useful to us over the New Year period because we needed someone with his qualities, but now the team is grooving to a different tune. Arsenal plundered 50 crosses and attempted 33 take ons against Leicester. They tried 33 crosses and 30 take ons against Southampton. Compare this to a month ago. Arsenal attempted just 6 crosses and 13 take ons at Anfield and 16 crosses against Stoke City. (There were 21 take ons at the Britannia, largely because Chamberlain played in the number 10 role). 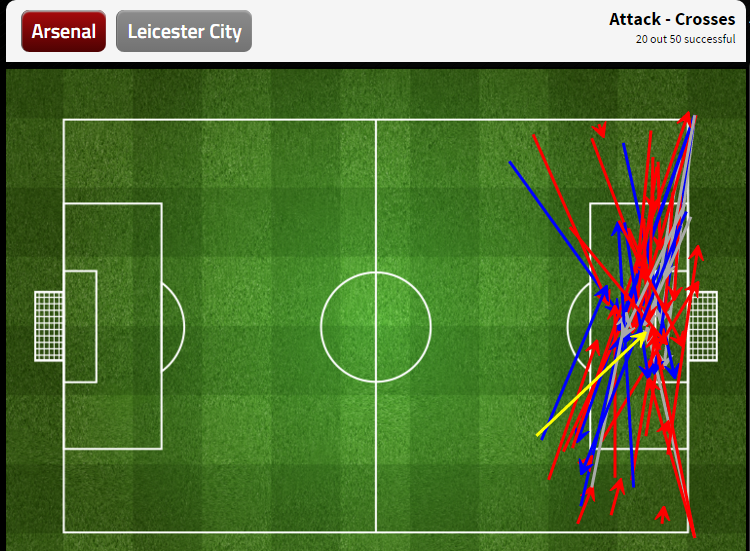 Arsene Wenger once famously referenced supporter discontent by quipping that “once you are used to caviar it is difficult to go back to sausages.” Arsenal aren’t exactly reverting to sausages, but they are certainly going to be a more bread and butter outfit over the next few months. Give it to Alexis or Özil as quickly as possible, or failing that, get it in the mixer to Giroud. The Gunners’ third costume change of the season sees them looking more blue collar, as they face their final curtain.

All images taken from fourfourtwo statszone