If the signing of Petr Cech was supposedly be worth an extra 10-15 points come the end of the season, then it might be worth applying the equivalent logic to the other end of the pitch. That might be harsh on Olivier Giroud, who has shown the character to make the most of his ability and has improved year on year, yet there is a feeling that Arsenal lack the savvy in front of goal to win the points they should. As it was, Arsenal were forced to lament the form of the opposing shot-stopper, Fraser Forster, as they were held to a goalless draw against Southampton last night.

The performance was by no means dispiriting, because the Gunners had plenty of chances to win. But it continued some of the slightly concerning trends, one of them the finishing, that has been the theme in Arsenal matches for a good while now.

The first-half was a strange one. While Arsenal battered The Saints’ goal in the second-half, they mainly stuttered in the first, but arguably still created the two best chances in that period. Both of them fell to Mesut Ozil, who showed fantastic balance and skill for the first, taking down Alexis’ lobbed pass and then shooting one motion. The second was more instinctive as he tried to help on a flick by Olivier Giroud but Forster managed to stick out a hand and keep it out. In all, it summed up the frustration that the Arsenal fans felt and that seeped on the pitch, as The Gunners primarily laboured to get through Southampton’s defence. And with each attack that broke down, gave space to counter which, with a bit more quality, the away side could have punished Arsenal.

It’s worth giving some credit to Southampton because, for the first-half in particular, they made it really difficult for Arsenal to play, blocking the centre and forcing the opposition to pass through the wings. The Gunners rose to the bait, not especially because they were suckered into it but because this is how they play out anyway, luring the opponents to press them in an attempt to open up the middle of the pitch. 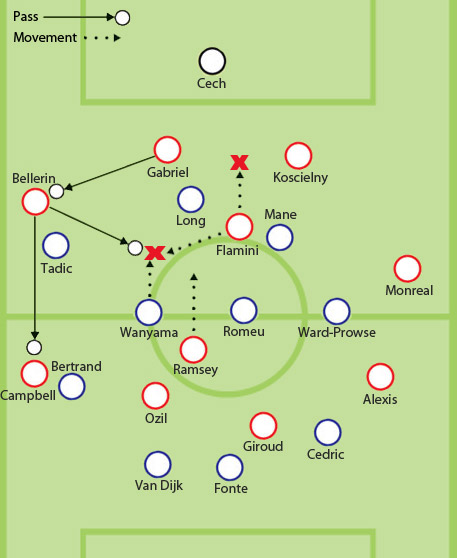 However Southampton themselves weren’t drawn into this game of bluff, and stayed true to their game plan by remaining tight in the centre, so that when the ball was played inside, they denied the playmakers time. Up against the muscular specimens of Victor Wanyama and Oriel Romeu, you had to move the ball quickly and the pair really tested the limits of the physicality allowed by the referee.

On the whole, Southampton used a 4-2-3-1 shape which was narrow on one side, with James Ward-Prowse tucking in on the right, and wider on the left. It’s that side Arsenal strangely targeted, though it seemed rather accidental because once again, this is how Arsenal build-up, choosing to play it through the right-back when the ball is deep – and then when the play progresses up the pitch, tending to prefer the left-hand side to combine.

Why this bias? It’s important to note that not all plans are by design and because Arsene Wenger caters for player’s individual quality to dictate the script for the most part, it’s something that’s occurred naturally over time.

Another reason, might be that because the team is built up with mainly right-footers, their body shape tends to open up to that side. Left-footers, Ozil and Joel Campbell, however, seem to prefer that side too so it’s only Giroud and Monreal who stretch that part of the pitch. Alexis, who is a mix between playmaker and finisher, tends to start just 5-6 yards off the touchline and occupies the inside left-channel.

As such, it was probably normal for Arsenal to play through Hector Bellerin early on when the opponent was still trying to force the issue. Yet each time the ball was played to him, he was put under pressure quickly and the options cut off. Campbell, ahead of him, has made the position his own in recent months, but his decision whether to come towards the ball or spin behind was often muddled. In some instances, he and Bellerin often fell onto each other such was the lack of synchronicity between the two. Campbell still created some good moments but it feels like he doesn’t quite belong in this team and this was a real test of his positional intelligence at this level.

In any case, building with the full-back is not ideal because invariably, you have to go inside. Could Aaron Ramsey have helped support the full-backs in this difficult period? Certainly, but it felt as if he were instructed to play further forward.*

Instead, Matheiu Flamini was tasked with taking the ball off the centre-backs – if they could find him because Arsenal don’t stretch the play conventionally as other possession sides do, therefore Flamini only intermittently drops in between the centre-backs. As such, Gabriel and Laurent Koscielny can’t split wide across the pitch so the natural angle is to pass it to full-backs if the centre is blocked. If Arsenal work it around well enough, the hope is then Koscielny can quickly ping a pass between-the-lines to one of the playmakers.

* That’s where the Flamini-Ramsey partnership seems to differ from Coquelin-Cazorla in that the distance is much larger between the two. Flamini can’t be really described as the decoy because that would mean Ramsey dropping deep for the ball as Cazorla did. Yet Flamini doesn’t come short for the ball as often as Arteta did because Wenger realises he hasn’t got the technique for it. Thus, the manager has tried to mould a system that caters for the players’ strengths and weaknesses in the build up without really answering it.

It wasn’t until Alexis switched sides with Campbell for about 10 minutes around the 25 minute mark that Arsenal began to find some fluency. After the swap, Alexis was involved heavily in the best moments. He had already created a good opportunity for Ozil on the 10th minute when Arsenal overloaded the left channel and he chipped the ball over the defence; and they combined late on in the half for another Ozil chance which was snuffed out. The best chance, however, was created by Bellerin on 20 minutes, his cross, after the play was switched to the right, finding Giroud who flicked it onto Ozil, but Forster again managed to touch the ball away.

Arsenal started the second-half with a renewed urgency and it was the late running of Ozil in particular that nearly forced the breakthrough on more than a few occasions. As he mentioned in an interview with Henry Winter for the Times, this season Arsenal mix the play better and when he sees space, he will run into it. As such, he can almost be a second-striker at times (and if you look at his pass received, he rarely dropped deep for the ball against Southampton).

His drive set the tone for Arsenal to try and find the goal, while his deliveries always seemed to find the head of Giroud. The best chances involved Ozil drifting to the left flank as Southampton were put on the back-foot and weren’t able to defend up the pitch as they would have liked. A cut-back, after moving into the left-channel seemed to evade everybody, while his drive into the box twice saw shots saved by Forster first from Theo Walcott, then from Alexis. 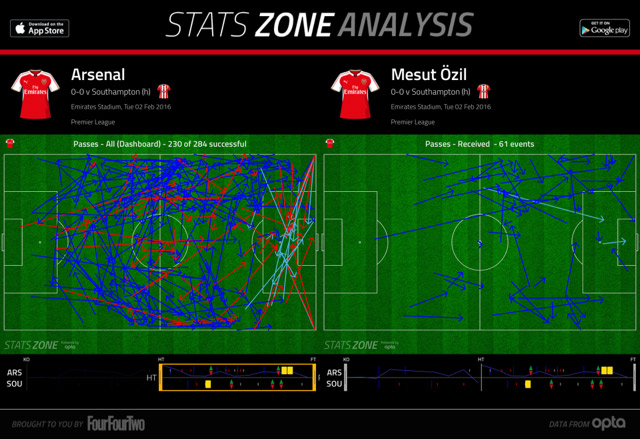 Indeed, it’s probably the Walcott chance that irks the most because while Arsenal peppered the Southampton goal, most of the openings were very close to the goal, and as such it’s hard to be anything other than instinctive because often there’s only one place you can hit it or you are rushed to shoot. However, Walcott had the most time to make his selection – even if it wasn’t necessarily an easy chance as players rushed to the line and the angle narrowed.

Still, a week after Walcott celebrated his 10th year at the club, it’s amazing how he’s failed to add much subtlety or variation to his finishing. He’s made a “brand” out of his movement, as Wenger says, thus he still his value in the side as a puller of defences,  although pressure then falls on others to pick up the slack if he (or Giroud) doesn’t.

That other goalscorer in the side should be Alexis, who played more as a playmaker than an outlet last night. The freedom suits Alexis because he’s the one that can be the most devastating and he’s key to making Arsenal play. What’s been notable in last two games since his return has been an increased link-up with Giroud, whereas in the past, as Tim Stillman notes, the pair have rarely combined.

In the two games pre-injury v Norwich and WBA, Alexis only found Giroud twice each. Giroud, however, is running the channels more, particularly favouring the left, allowing Ozil or Ramsey to make runs off him. In the game last night and against Burnley, Alexis also seems to be getting better at reading Giroud’s movement, slipping him behind a number of times or looking for a quick one-two. 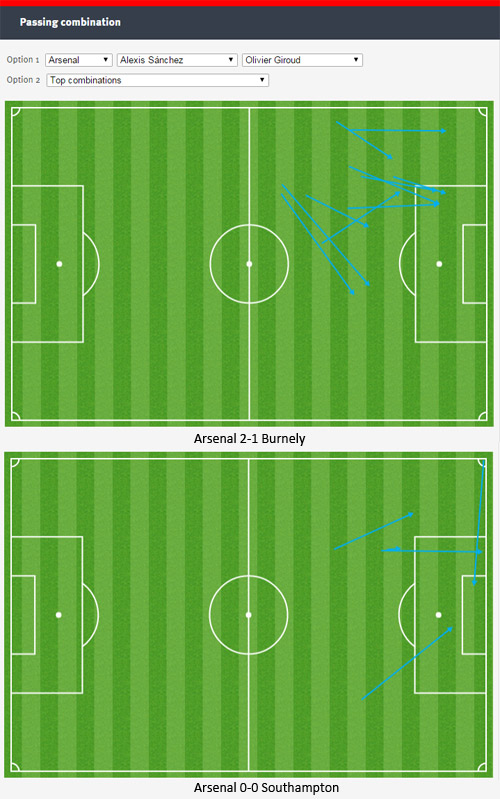 Overwhelmingly, after a stuttering start, all the play was coming down the left, bar the odd cross from the right. Bellerin stayed back while Alexis and Ozil fired the ammunition but in the end, it was to no avail.

Previous articleArsenal 0-0 Southampton: Title challenge on the brink after another blank
Next articleDon’t you know that it’s different for goals