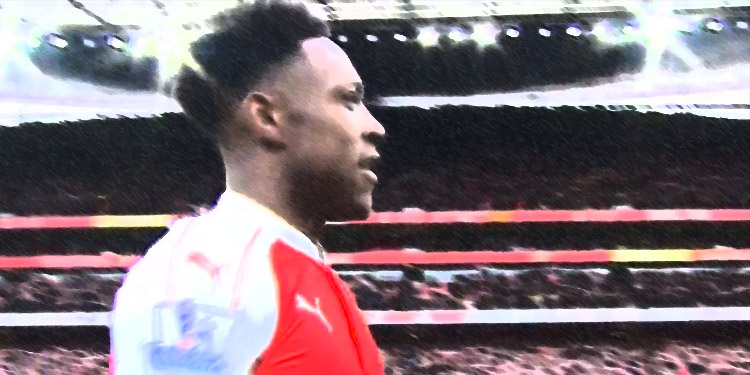 I’m finding it difficult to know where to start this morning. The adrenaline rush of that late winner carries you through for a while, but then there’s the exhaustion that kicks in, having had to endure, if that’s the right word, the previous 94 minutes.

I spent yesterday watching clips and GIFS and looking at pictures. There’s a particularly amusing one of Robert Huth, his face a picture of crumpled dismay after the Danny Welbeck goal goes in, but I can’t seem to find it now.
Update: found it! Hey, we all know that look well. We’ve seen it on the faces of our players enough times, and it’s nothing against Huth in particular, but if you’re a football fan and you don’t take some joy from the misery of others, then you’re a better person than I am.

After the Vardy dive, the Mahrez dive, the time-wasting, and that abominable challenge by Danny Drinkwater on Aaron Ramsey – the reaction to which has been predictably disappointing from those in positions to highlight just how dangerous and nasty it was but who chose not to or to excuse it – I’m done with the Leicester fairytale stuff. Don’t get me wrong, by the way, I understand why they did the things they did (apart from Drinkwater).

When you have a 5 point lead at the top of the table and you’re drawing away from home, why wouldn’t you waste time at every goal kick and throw in? When you have a ref that’s easily fooled and there’s a culture that accepts cheating as ‘clever’ forward play, why wouldn’t you try and win penalties? When you can sense the home crowd is getting ever more frustrated, and that frustration is passed on to certain players who might lose their cool, why wouldn’t you be as annoying as possible at all times?

But, if you do that, don’t expect people not to judge you on your behaviour. There’s a level of cynicism in every team – taking a yellow card on halfway to stop a dangerous break, for example – and I’m not saying we’re whiter than white. Of course we’re not. I’m sure oppositions fans feel the same way about the way we behave at times, but then I don’t really care what they think. All I know is that there almost always comes a time when the plucky underdog reaches a point where they become a persistent irritant, and that’s the case with Leicester for me after this weekend.

Anyway, onto matters more positive, and what a return to action that was for Danny Welbeck after 10 months out of the game. Sometimes I think people underestimate how difficult it can be for footballers to spend significant time out with injury. They think that the wages they pick up and the nice car they drive and the lifestyle they have makes up for the fact they can’t play, and that’s really not the case.

Most of them find it extremely trying not to be able to train and play, because this is what they do. Quite how Jack Wilshere hasn’t gone certifiably insane at this point is beyond me. There are psychological issues for them to deal with, as well as obviously getting physically fit again. Maybe Welbeck is like this all the time, but in the recent  pictures taken since his return to full training, he’s looked like the happiest man alive just to be back out there with his mates.

To be part of the squad and playing again is what it’s all about, and for him to mark that comeback with such a crucial goal will be a further boost to him. He says:

It was a wonderful feeling to get that winning goal at the end. It’s been a long time off the pitch, the longest period of time that I’ve spent off playing matches in my career. It’s difficult. I think you’ve just got to try to stay positive. I had a lot of great help behind the scenes with the medical staff and with James Haycock, who worked with me personally and was great. I think hard work eventually pays off.

He really does seem like one of the nice guys anyway, so that buys him even more goodwill, but it would take the coldest of hearts not to warm to the moment he provided us, and his reaction to it. What I would say though, is that we’ve seen with Alexis that one goal does not mean a return to form. The Chilean scored on his first game back, cracking home the winner in the 2-1 FA Cup victory over Burnley, but he’s struggled a bit since.

Welbeck is still going to be a bit short of match fitness and the sharpness that comes with playing games, but having him back in the squad certainly does provide us with another effective option from the bench. And it’s hard not to look back at certain matches this season when we’ve had nothing but four defenders and a couple of kids to call on, and wonder how different things might have been with better attacking choices. Still, better late than never and hopefully the additional competition he provides to the squad will be a positive all round.

He’ll probably get another run out in the FA Cup this weekend against Hull where the manager has to balance the need to win the game against that of keeping his best players fresh for the game against Barcelona the following Tuesday. In the airport on the way home, I watched them dismantle Celta Vigo and it was kinda scary to be perfectly honest. I think they might be quite good at football.

They also scored *that* penalty, which is part of the discussion in this week’s Arsecast Extra in which James and I also chat about Leicester, the late goal, the terrible refereeing, how annoying Leicester were, and lots more. If you haven’t listened yet check it out on site here, via Acast, or iTunes.

Happy listening, more from me tomorrow. Until then.

Episode 551 – The Goggles Do Nothing