Liverpool fans get a reaction, but is it a pyrrhic victory?

Morning all. Liverpool fans walkout of Anfield last weekend was extraordinary, let’s make no bones about that. It was an act of solidarity amongst fans of one club that ought to be recognised and applauded by fans of every other, because the ticket price issue is one that affects everyone.

They made their point on the day; it might well have cost their team two of them in the Premier League, and yesterday the Fenway Sports Group, the owners of Liverpool, released a statement apologising for the ticketing system they’d put in place for the opening of the new stand at Anfield.

On the one hand, it showed that fans still have a voice, and still have some power. On the other, the two season ‘price freeze’ by Liverpool will end up costing some fans even more, as per this graphic from Sky Sports (which I’m a little dubious about because of what was outlined in the statement, but still). 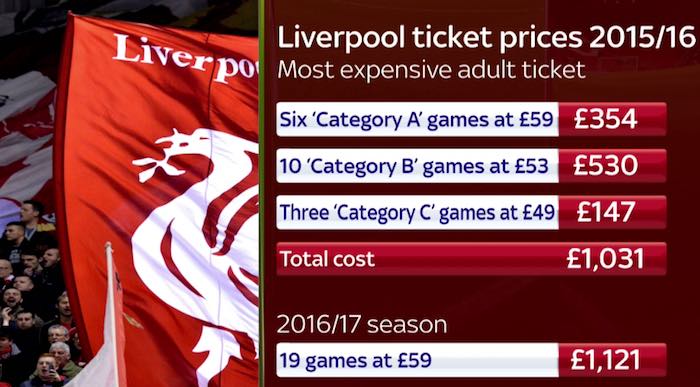 So was it anything more than a pyrrhic victory? The highest priced £77 tickets are gone, but what this protest has done is basically removed the tickets that only a few could afford anyway, and passed that cost onto the people who were complaining about the cost in the first place.

Does that mean it was pointless? Far from it. Liverpool fans should be chuffed that they’ve provoked a reaction from the people in their ivory tower. It shows that clubs and owners will listen if the point is made on a wide enough scale, but that the response is a club doing as little as it can. It doesn’t solve the ongoing issue of ticket prices being too high, nor has there been any such concession towards that as prices have been ‘frozen’, not lowered.

The wider point remains though. What happens after this two year price freeze? The tickets go up because of inflation, because of demand, because that’s what happens with ticket prices. Liverpool’s owners have seen a team go from almost winning the Premier League to mid-table rot in less than two years. They’re obviously ambitious and they’ve brought in a great manager, but that’s a manager that needs to spend a lot of money to get them back into the top four, and even more to make them title contenders.

Spending that money means buying better players and that means spending more money on transfers and wages and bonuses. Although the TV and commercial revenue will play a significant part in that, is there any way that Liverpool will seek to decrease any revenue stream as they try and fund that kind of expenditure? Regardless of how small a percentage of their overall income match day revenue is, they make their projections based, at the very least, on that income remaining constant.

It’s the same at all the other clubs. This equalisation of talent across the Premier League, which has seen fantastic players go to clubs they would never have joined three or four seasons, has happened because these clubs can pay higher transfer fees and higher wages. Some players will move only to fulfill ambition, but look at the trickle of high profile players heading for China. They’re not going there for the quality of the football or the chance to win trophies, because frankly they don’t have any idea what those trophies are. Watch as that trickle becomes a steady stream.

They’re going there because they can get paid a lot of money. That’s why we’ve seen such an influx of talent into the Premier League, and on the one hand it’s great because we’ve seen teams become better, and the league itself is more competitive. On the other, I suspect it has sky-rocketed wage will bills and agents fees, and like ticket prices, those are things that don’t go down either. They continue to rise.

The demand to spend money on the best players is completely natural. Fans want their team to improve, to win things, and to do that you need to pay the going rates. But let’s not be blind to the fact that this kind of ‘ambition’ also has consequences. More and more this feels like a bubble that has to burst at some point, but it’s hard to see how. It’s self-perpetuating, we no longer need to feed the beast, the beast is feeding itself.

TV pays the money and calls the shots. Clubs take that money and spend it on players and wages and agents fees (some of them anyway, haha etc etc). Clubs also maximise their commercial revenues, signing deals with partners for all kinds of things. The Official Washing Machine Sponsor of Lithuania and so on. In their desire to do that, they’re willing to overlook the appropriateness of some of those sponsors, because it’s the cash that counts.

And not once is there any thought that fans might pay less, because why on earth would that even be a thing? The demand for tickets is so great that a bit of PR sticky-tape is enough to make things all better again. The fans will continue to buy the tickets because they love their team and that’s the bind they have us in.

So, what Liverpool fans did was highly commendable, and the reaction they got from the owners was evidence of that. If they’re deadly serious though, it’ll be the first of many such protests. And if football fans across England are serious about this issue, they’ll join them too. Let’s wait and see if that happens.

Speaking of protests, Leicester fans are planning on doing a Bayern Munich, leaving their seats empty for the first 5 minutes of the game on Sunday in protest at Sky’s decision to move the date and time of the game at late notice. Again, commendable because doing something is better than doing nothing at all, but isn’t the only truly effective protest for them all to stay away completely?

But their team are doing brilliantly and this is a match that will have a huge impact on what’s been a great season for them. How could they possibly do that, because they love their team? And Sky know they love their team, and that when it comes right down to it, that will override the cost and inconvenience of their grotty decision to change the fixture at such short notice.

Also, do we think that Sky will turn their cameras on an empty away end because of what they did? Will they show the fans coming into the stadium late as part of a protest against the people broadcasting the match?

“Look, they hate us and everything we stand for!”

The Premier League is a brand, and brands do what it takes to protect themselves. Expect an edict from above that seeks to absolutely minimise any coverage of what Leicester fans, and those Arsenal fans who will join, are doing.

Maybe this is a particularly cynical or jaundiced view of it all, but for all the soundbites of how it’s the fans that matter the most, the evidence suggests that far from the case. Not unless things get a lot more disruptive than one set of supporters staging one walkout, that’s for sure.