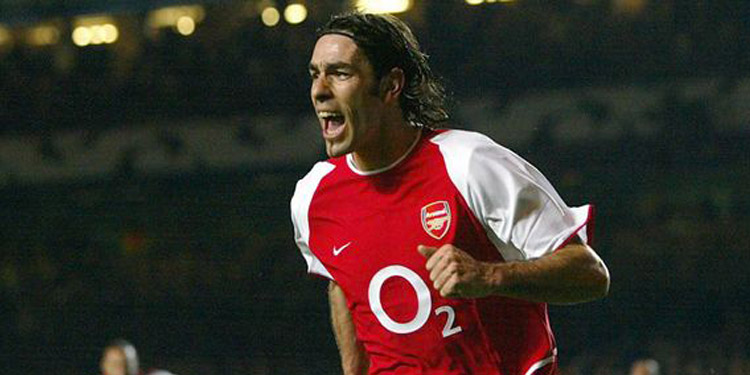 I was going to write about Danny Mills this morning. I don’t know if you saw his piece in The Times yesterday, but basically Barcelona’s Henry/Pires homage against Celta Vigo the other night was an excuse for him to talk about how much he dislikes Robert Pires.

Now, as anyone who reads this blog regularly will know, if you’re not a friend of Robert Pires then you’re not a friend of mine. If you can’t appreciate dreamy football genius then that’s on you. I don’t feel sorry for you or anything like that, I just think the world would be a better place if you didn’t exist.

Anyway, as we know Messi tapped the ball to Suarez who scored and this was genius, but Pires and Henry messed it up and they are the worst people alive. Especially Pires, because Mills also thinks that he was the man who, and let me quote him here, ‘really brought diving into the English game; his habit of throwing himself to the ground without any provocation always infuriated me.’

I’ll admit, I don’t think that penalty against Man City was their finest moment. I’m pretty much of the opinion that for a player with the kind of quality they possessed, your best bet is just take the penalty and score it. I’m all for things that are fun and inventive, and I’m not going to criticise anyone for doing it, but there’s just a voice in the back of my mind that thinks ‘It’s a penalty, just take the penalty’.

Especially when you’re Lionel Messi and you’re the greatest footballer that ever lived (apart from Nicklas Bendtner, of course). If they’d done that against Celta Vigo when they were 1-0 down or in the last minute to win the game, then I’d be more inclined to think it was something special. When you’re 4-1 up and you look like you can score at any time, then there is an element of rubbing it in a bit.

Anyway, back to Danny Mills and his contention that Robert Pires brought diving to English football. It is, unquestionably, one of the stupidest things I’ve ever heard any pundit say. And the bar is pretty low here, folks. I mean, I guess I know why he says it – and it’s not just because of personal bitterness, although that is obviously playing a major part.

It’s because Pires was labelled a diver by sections of the press, while other players who were just as light on their feet were allowed a free pass. It’s always been easier to criticise a foreign player for a piece of gamesmanship because good old fashioned English born players would never do that. They would never cheat in such a ghastly way. They might kick your knee off, but heaven forbid they might throw themselves to the ground to win free kicks or penalties.

Perhaps Mills doesn’t remember players like Franny Lee, a former Man City man, who was notoriously light on his feet. He might remember Michael Owen ‘winning a penalty’ for England against Argentina in the World Cup in 1998, but because it wasn’t reported as the dive that it was, Owen’s reputation remained intact.

“If I ever saw one of my team-mates diving, I’d definitely have a word,” said Steven Gerrard, who had this in his locker. Maybe Mills thinks Gerrard was inspired by the nefarious influence of Pires. If you watch that video, you’ll notice that many of those moments come while wearing an England shirt. It’s like armour from criticism if the cheating helps your country get a goal or win a game.

Wayne Rooney has dived more times than I can count, most notably over the leg of his England teammate Sol Campbell at Old Trafford to win a penalty in that fractious, contentious game. There was another there too when he did that strikers trick of falling into the onrushing goalkeeper, despite no contact being made with him whatsoever. Stick ‘Wayne Rooney dive’ into the search box on YouTube and feast on the results within.

Who was the player most cautioned for ‘simulation’ in the Premier League a couple of seasons ago? Was it Alberto Collapso? Was it Franz Splat? Was it Jean-Pierre Plunge? Was it Emmanuel P’Lummet? No it was not. It was Gareth Bale. Not English, I know, but British. And at Sp*rs. Protected by a complicit media.

Do you remember the mayhem when Eduardo took a tumble against Celtic to win a penalty in a Champions League qualification tie we won 5-1 on aggregate? It was like he’d cheated a vulnerable elderly person out of their life savings. The press, who had little time for a Scottish team before that were, almost as one, outraged on behalf of a side who had scored four goals fewer than us in the tie, with some going as far to suggest there ought to be a replay of some kind, or that Eduardo should be banned.

Such was the coverage over this that UEFA did actually ban him for two games, before overturning it on the basis that there was actually no evidence to support such a decision. If you think that the ‘foreigner playing for club managed by foreigner’ wasn’t part of the reason this story dragged on for weeks in the press wasn’t part of it, then you’re basically bonkers.

There has always been a disproportionate amount of column inches given to the gamesmanship of the player from abroad, compared to that of the good honest English pro, who plays the game in the right way and who would never cheat but if he did it’s ‘clever’ or ‘winning a penalty’ or ‘making the most’ of something for the benefit of his team.

Danny Mills nonsense yesterday is more of the same. He’s clearly got a personal problem with Pires after all these years. Perhaps it’s because he never got near him in all those games. Perhaps it’s because Pires was a player of craft and sublime skill who won many things because of that, and Mills was somebody whose level never got above average, at best. There’s more than a whiff of bitterness from this hastily scrawled column of his.

But it’s probably because he’s incapable of thinking for himself and truly believes that foreign players are the ones to blame for all the perceived ills of the game. He can’t open his mind to the fact that players of all nationalities are capable of the kind of deceit and and trickery he takes such offence to. The persistence of sections of the media in perpetuating the ‘foreigners = bad cheats: British players = pure and wholesome and competitive’ plays a significant part in that thinking, and he’s been given an outlet to spout his own brand of this half-witted, vacuous nonsense.

And if he wants to try and suggest that a man who scored 84 goals for Arsenal, won the double, was part of the Invincible, scored an FA Cup final winner, and whose quality as a footballer was such that he’d have been a shoo-in for European Player of the Year but for that knee injury in 2002, is best known for diving, then he’s even more of a simpleton than I previously thought. And I thought he was pretty dim to begin with.

And look, even if you were so small and petty as to try and condense a player’s career down to one incident, one should make sure that one is not in the glass house when throwing stones. Look at his face!

PS – at the top I said I was going to write about Danny Mills because I had no real intention of giving him any more oxygen, but it just kinda came out.