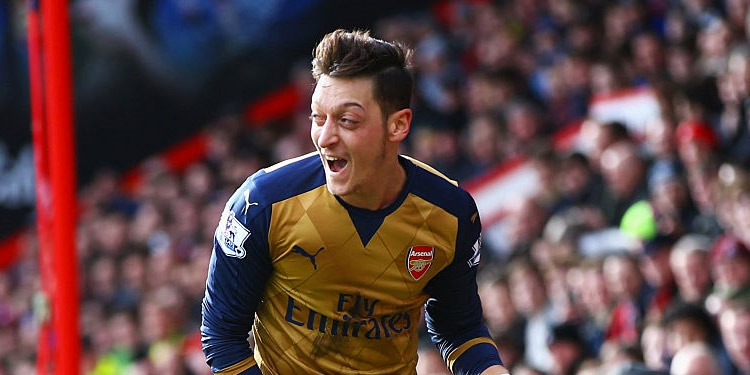 In recent games it’d be fair to say we haven’t had a lot of luck. Per Mertesacker’s red card, shots off the line, keepers making ridiculous stops, things haven’t gone 100% our way. Yesterday, I think we got a little something back when Kevin Friend issued just a yellow card to Mathieu Flamini in the 8th minute for what was a two-footed lunge.

That he got the ball is irrelevant, the fact is he jumped in with two-feet, off the ground, and only that it was more like an 80-20 in his favour, I think he’d have been given a red card. There are certainly referees in this league who could have sent him off anyway, and if they had he could have had no complaints – not least because there was no need to make a challenge like that in the first place.

He could easily have stayed on his feet and won the ball, and for one of the team’s most experienced players to risk a red card so unnecessarily in these circumstances was idiotic. We hadn’t won in the league since January 2nd, the 1-0 win over Newcastle, and Leicester’s win over Man City meant nothing less than three points would do. You want your players to be committed and strong, but this was neither of those things.

I thought he played reasonably well in general, but let’s not beat around the bush when it comes to that challenge. If an opponent had gone in on an Arsenal player like that, there would be nobody making excuses for him, or willing to suggest it was anything less than a red card. We got away with that one, and given the somewhat hysterical reaction to his selection in the first place, he’d have been a very unpopular man this morning if he hadn’t.

Aside from that, we played our best football in the first half. Alexis, still finding his way to match fitness, fired over when he might have done better, and the sight of Flamini tearing into the box, arms out in the classic ‘I’m open here’ pose as the ball flew over the bar was, admittedly, quite amusing.

Then the two goals came in quick succession. An Aaron Ramsey pass was nodded back into the path of Mesut Ozil by Olivier Giroud, and the German’s emphatic right-footed shot blasted into the net on 22’o8. Quite a finish with his wrong foot. And although it feels like scoring has been an issue at times this season, it also feels like we’ve scored in quick succession in a number of games, and so it was again yesterday.

Again Ramsey was involved, picking up a ball that Alexis couldn’t quite control. He fed Alex Oxlade-Chamberlain and his finish cannoned into the net off the post on 23’36, just 88 seconds later. The finish was excellent from a player struggling for form this season, and although the rest of his performance didn’t quite match those heights, you have to hope that his first Premier League goal since an equaliser against Sp*rs in September 2014 will help restore some confidence.

A shaky moment from Gabriel almost proved costly, until we were rescued by the lightning pace of Hector Bellerin, and from there the game played out to what felt like its inevitable conclusion. Bournemouth tried hard and played well in the second half, but created few chances. We never looked like extending our lead, but rarely felt threatened.

When they did have a couple of pops on goal very late on, the quality of Petr Cech was evident when he made a fantastic double save to keep his 12th clean sheet of the season. Sometimes a keeper can benefit from having a rock solid defence in front of him and clean sheets can be attributed to that. I’d have to go through them again, but I suspect Cech has earned each and every one of his since he joined in the summer.

We had a strong start and we were 2-0 in front with a good convincing performance. After that we were weak in some periods and we suffered a bit more. It was important for us to not concede a goal. In the end the second half was about keeping the result than continuing our flow in the game. It was an important three points for us.

After so long without winning in the league, getting the right result yesterday was all that mattered. I think you could see the weight of that in the overall performance, which really wasn’t anything to write home about, but we needed to win, we did just that, and that’s a positive. It’s also clear that players like Alexis and Coquelin, whose reintroduction to the squad is so welcome, may well need a bit of time to get themselves back up to speed. They got playing time under their belts, and hopefully will be readier by the time we face Leicester next weekend.

We’re going to have to play better than that against the league leaders, but we have a full week to get the batteries charged, and once more I think the manager has some thinking to do about what kind of team he fields. That’s obviously something we can discuss as the week goes on.

I suppose the other thing to note is where the goals came from. We talked this week about the supporting cast stepping up when the strikers/forwards don’t score, so for Ozil and Oxlade-Chamberlain to make the difference is interesting. We’re going to need more of that, but it’s good to see them make a telling contribution in terms of goals.

Right, that’s that for this morning. There will be an Arsecast Extra for you later this morning, but it was recorded yesterday just after the game, so there’s no need to send questions. That’ll be ready for you mid-morning, so keep an eye on @arseblog for an update to tell you it’s live.