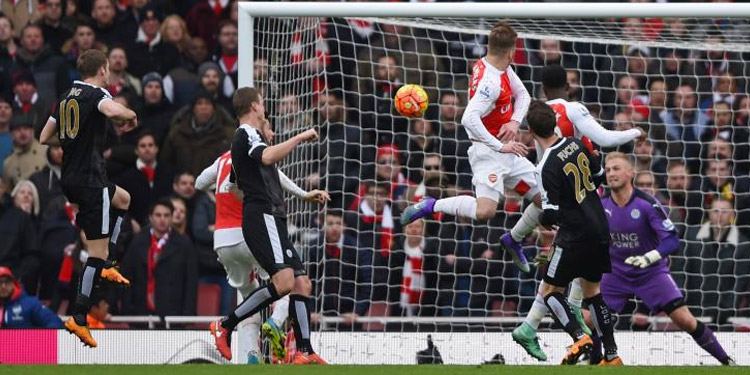 In recent times, we’ve gone into games with four defenders on the bench. That’s a consequence of the injuries we’ve suffered and sustained, but yesterday was evidence of just what a difference having attacking options can make to a game.

Even after they went down to 10 men, Leicester defended well, stayed organised, and we found it hard to break them down. Bringing on Theo Walcott helped stretch things a little, and by the time Danny Welbeck had come on, they were hanging on by their fingernails. Of the 24 attempts we had on goal during the game, 9 of those came in the final 9 minutes of normal time and the injury time that was added on.

We turned the screw, and when Welbeck glanced home that header with practically the final touch of the game, the eruption was one of joy and relief but mostly joy because it felt like we’d been hammering hard enough on their to deserve it. But also because you feared we just wouldn’t find a way through. Per Mertesacker’s header trickling inches wide and Olivier Giroud’s shot saved brilliantly by Kaspar Schmeichel looked more and more like ‘if only’ moments, but Welbeck had other ideas – more on that anon.

That we went in behind at half-time after a very entertaining opening 45 minutes was due to incompetent refereeing and a blatant dive from Jamie Vardy. Quite how Martin Atkinson didn’t award us a free kick just outside their box for an obvious foul on Mesut Ozil is beyond me, yet he deemed Vardy kicking Monreal and falling over a penalty.

Maybe Monreal leaving his leg out that was inviting trouble, but he made no contact with the player. It was Vardy who initiated the contact, and it was a piece of cheating. There’s no other way to describe it. If you have your legs taken out from under in the box, penalty all day long, nobody would argue. But if an attacker kicks a defender and goes down, he’s cheating. There’s no justifying it, it’s not clever play, it’s gamesmanship and quite why football continues to tolerate and excuse it is one of the great irritations of the modern game for me.

I suppose it was especially galling when I thought we had a very decent penalty shout in the first half, made even more so by the fact we ought to have had that free kick in a good position outside their box. The boos for the match officials when they made their way off the pitch for half-time were among the loudest I’ve ever heard.

A half-time change with Calum Chambers replacing Laurent Koscielny only added to the nerves, but he did fantastically well. Helped somewhat by the fact they were reduced to 10 men, but that’s to take nothing away from how assured he was in what was a big, high pressure game. Mahrez had a dive in the box, as fairytale, plucky little Leicester, tried to cheat their way to another penalty, but Danny Simpson’s two quick-fire yellows allowed us to get on top of the game.

They complained, as you would expect them to do, but having been the recipients of that generous penalty, they didn’t really have a leg to stand on. Arsene Wenger brought on Theo Walcott for Francis Coquelin who was clearly very pumped up and got himself involved in a bit of an incident when Mahrez was being taken off. The manager is criticised for his subs sometimes, but that was a sensible one, not just because we needed a goal, but because the last thing we needed was for the numbers to be evened up.

The equaliser came when Hector Bellerin’s cross was deftly nodded down into Walcott’s path by Giroud, and his finish was not that of a man who has been struggling to make an impact later. 1-1 and game on. We pushed and pressed and crafted chances, as I said in the closing period of the game their defence became more and more disorganised, but when you’re that far into injury time, and you haven’t take one of those chances, you resign yourself to it being too late.

Injury time goals seem to be how we drop points, not win them. But then one of their players made a stupid foul in midfield, and Ozil stood over the ball. The Arsenal players lined up, he curled it in and there, after 10 months out with injury, was Danny Welbeck to glance a header into the bottom corner. His celebrations were fantastic, jumping into the crowd and getting himself a yellow card in the process, not that he cared. His I couldn’t give a shit reaction to it afterwards was fantastic.

Those celebrations were matched by those in the stadium, because not only is there something wonderful about a late winner in a big game, it also felt like a seismic moment in the season. Staying 5 points behind them wouldn’t have ruled us out of the race for the title, but it would have cast further doubt on our ability to go the distance.

Instead, there was an almost tangible sense that something big had happened, evidenced by how long people stayed in the ground afterwards to sing and cheer and celebrate (but still find time for a chorus of boos for the officials as they went off – even after we’d won!).

We came back in the second half with relentless energy. And we took as well all the risks to win it. We knew a draw was not good enough. In the end it paid off, down to the mental desire of the team to give absolutely everything to win it.

And he revealed it was a late call whether or not to include Welbeck, saying:

In the last two days he was convincing in training. I planned at the start, when I made my press conference on Friday morning, to play him next week. But in the last two training sessions he was very strong and I decided just in the end to include him in the squad.

Good decision that. And having more attacking options on the bench than defensive ones is a nice thing to have at our disposal again. There may be some worries about Koscielny, but we can deal with that during the week. What a moment for Welbeck though, having been out for such a long time to mark your comeback with a goal of that importance is just fantastic.

His impact was especially useful given that I thought both Ozil and Alexis struggled to find their best form yesterday, so having another player who can chip in and score is very welcome. Both our subs made telling contributions yesterday, attacking depth is good.

So, overall, a brilliant win. There really is nothing quite like a goal so late you know they can’t possibly come back to take something from the game, and it’ll be interesting to see how they react to it, but more importantly how we carry on from here. The schedule is difficult and daunting, but that’s a three points that should give us a real lift in terms of confidence and belief. I was glad to be there to see it.

James and I will be here with an Arsecast Extra for you later on. If you have questions or topics for discussion, please send to @gunnerblog and @arseblog with the hashtag #arsecastextra. That will be available to you around lunchtime.

Oh, and to cap a truly marvellous day, this happened. Yes, I swooned. #dreamy.