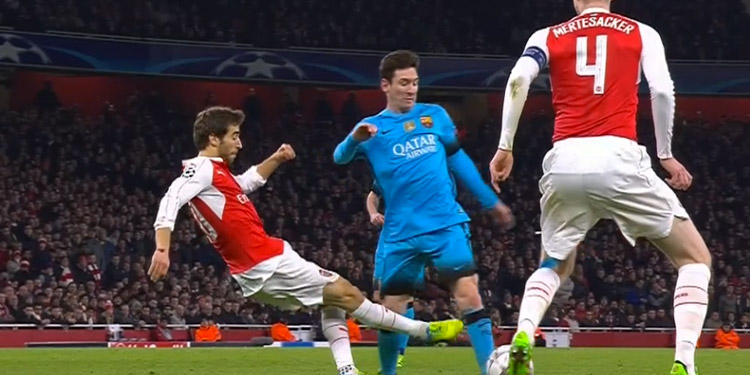 You know, I thought for 70 minutes or so, we’d done pretty well. Obviously we hadn’t dominated the game, but then nobody was expecting us to do that anyway, were they?

We’d worked hard, kept our shape pretty well, and nobody was found wanting defensively – the only time we got really exposed was when Alex Oxlade-Chamberlain’s injury kicked in at the start of the second half and he couldn’t run. Around then Barcelona showed how dangerous they are when there’s any advantage, and only for a brilliant Cech save from Neymar, we’d have been behind.

0-0 at 70 minutes though, you’d have taken that all night long. 0-1 at 70:50 though, that’s another thing entirely. Whether we got a bit carried away with ourselves, it’s hard to say. We had put some pressure on, and a Coquelin cross from the right just rolled behind the Arsenal men in their box. Barcelona got it clear, and only for a superbly strong piece of defending by Koscielny on the right and a midfield that was aware and not caught high up the field, they may have caught us out then.

There was a moment before the goal when we were attacking again, Francis Coquelin had the ball and rather than go forward he went back to his centre-half. There were obvious groans from the crowd who wanted more than a safety first approach. We went forward again, a Bellerin cross was headed away by Pique and that started the break that led to the goal. This time the players didn’t react as well.

And maybe that’s illustrative too of what went wrong, because we never looked like a team that was going to win the game, or to dominate. I understand his frustration at being caught on the break the way we were, and perhaps a more cynical side wouldn’t have allowed that move to develop the way it did, but we’re not that side and we paid the price for leaving them room that we hadn’t all night until then. You cannot give Suarez, Neymar and Messi a banquet and not expect them to feast.

The second goal was equally frustrating because it was Barcelona taking advantage of a moment in the game, something we simply didn’t do. Per Mertesacker’s cushioned pass to Mathieu Flamini was the wrong option. The substitute was caught on his heels, Messi wasn’t, the Frenchman’s wild hack at anything at all caught the striker’s legs and it was a stone-cold penalty which was dispatched ruthlessly to make it 2-0.

If you wanted to argue that Flamini wasn’t up to the pace of the game yet, you can go there if you like, but unless Coquelin was injured, I didn’t see any need to bring him on in the first place. The penalty obviously wasn’t 100% his fault, but like that two-footed jump a few weeks ago, it was the kind of thing a player struggling to keep up at this level does.

They hit the post, Cech made a good save from Neymar, and it could have been worse before the end, but it’s bad enough. To go there and overturn a 2-0 deficit is very unlikely, Wenger giving us a 5% chance of doing that afterwards.

And yet, as I said, for 70 minutes we did everything you’d want us to do. Ramsey and Coquelin were solid in midfield, pressing and harrying, and the whole team looked switched on when they had the ball. Perhaps the biggest regrets this morning come from what happened when we had it, and when we couldn’t take full advantage of the things we created.

“We needed to score,” said Mertesacker more than once in his post-match interview. And we had one glorious chance when the ball fell to Oxlade-Chamberlain in the first half with just the keeper to beat. He snatched at the chance, mis-kicking it right into the keepers arms. A moment in a game that would have changed things, and we fell short in front of goal again. It’s now a chronic problem throughout the team.

There are others that spring to mind. Oxlade-Chamberlain bursting down the right as we broke, Giroud and Ozil tearing into the box for the cross that would have stretched Barcelona, instead he clumsily overhit the ball, allowed Mascherano to make the tackle, and picked up an injury in the process. You can’t let opportunities like that slip by if you want to win games at this level.

Giroud had a header saved by Ter Stegen, with the defender backing into him he couldn’t do more than direct it on target rather than power it, but 2 minutes before their goal he tried a reverse pass to Walcott in their box only to realise he’d gone the other way. When you look back at it, you think of the goal he scored recently against Liverpool, fizzing a curling shot into the far corner and wonder why our main striker didn’t have a go on goal.

Going back to the idea of being cynical, there was an incident when Jordi Alba pretended to be hit in the face by Giroud then, after he’d finished rolling around like a twat, he put his head into the Frenchman’s face. On the one hand, the play-acting and amateur dramatics is awful, but on the other you can be quite sure if the tables had been turned Alba, or any other Barcelona player, would have gone down like a sack of spuds.

We’ve seen red cards given for that in the past, if we want to press home any advantage, is that something we have to learn how to get on top of? I mean, I hate it, but they all do it, and you don’t get bonus points for being nice or sporting. It’s not a criticism of Giroud, by the way, just an observation.If you have a chance to get an advantage in the game, should you take it, even if it crosses the line of what most people would consider decent?

Ultimately, the result against the best team in Europe is not one that’s particularly unexpected, it’s just the manner of it that’s frustrating this morning. You can’t but admire the scintillating break for that first goal, but you can be a bit cheesed off that we let it develop. A truly cynical person would say Koscielny, if he were really aware of the danger, could take a yellow for a foul on Saurez before he makes the pass inside.

It’s something Arsene Wenger was clearly thinking, saying, “We had two or three opportunities to stop the first goal which we didn’t do because I don’t think we had the right response to the situation that our players faced.”

The second goal, just so avoidable. There’s a time to play and a time to put your foot through the ball, and that was the latter. 1-0 over there, you just never know. 2-0, and having to score goals makes it nigh on impossible, but there you go.

For the players, this has to be compartmentalised in a hurry because we have a huge game on Sunday at Old Trafford. The next game you face is always the most important one. If there were vaguely unrealistic hopes of beating Barcelona, taking three points from a United side that has been struggling so badly recently is definitely more within the realms of possibility.

And doing that would go a long way to treating the wounds of last night. Till tomorrow.