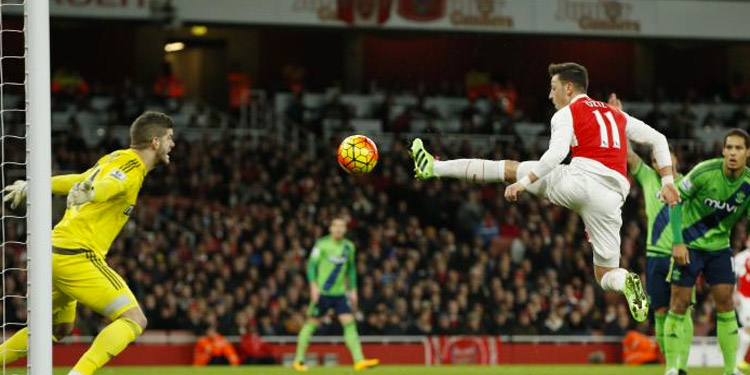 Sometimes, after a bad result, the morning after can provide a bit of calm and clarity. Sometimes the frustration from the night before is even more keenly felt, and this morning is one of those. I don’t think it was one of our best performances of the season, far from it, but when you look back at the chances we had to score it’s impossible to be anything other than bitterly disappointed.

There are issues with this team right now. There are players who are struggling for form. We surely don’t need any more evidence that Aaron Ramsey and Mathieu Flamini in midfield go together like toothpaste and orange juice. And we now haven’t scored in the league for three successive league games.

Yet last night, despite the fact Southampton looked livelier and well up for it in the first half, we had the best chances. Mesut Ozil’s control from an Alexis Sanchez pass was sublime, the finish tame. Ozil again broke the offside trap to find himself with just Fraser Forster to beat, but poked his shot a little too close to the keeper and saw his touch send the ball just wide. He should have scored from there.

In the second period, we picked it up, we were better than they were, and we got on top of the game in a big way. Giroud saw a right-footed effort tipped over. We cut them apart with Ozil and Alexis, there was nobody there to apply the finish until Campbell curled over. He should have done better.

There then came an astonishing five minutes when we had 4 or 5 very good opportunities and spurned them all. After Gabriel had left hearts in mouths at our end with a slide on Mané, we went up the other and fashioned a chance for substitute Theo Walcott. With just the keeper to beat, his finish was dismal, a side-footed attempt when he really should have cracked it to the far corner – something he’s more than capable of. The keeper saved the rebound.

From the corner Forster saved from Alexis. We kept the pressure on. Laurent Koscielny, who made the difference against Newcastle, headed over the bar from inside the 6 yard box. It would have been easier to score. He should have scored. Alexis had a shot cleared off the line. Ramsey had a shot. And then an injury to a Southampton man dented that momentum a little, but even afterwards there were more chances.

We ended up having taken 21 shots, 20 of them from inside the area, Ozil creating 10 chances (a season high), and failing to score. Afterwards, Arsene Wenger, who is not usually so abrupt, said:

You expect their keeper to have a good game but I believe as well we had very poor finishing. I think we have to look at ourselves and start to finish with a bit more conviction. The way we have took our chances was not good enough and that’s why we dropped two points.

I’d certainly be more worried this morning if we were going through one of those spells where we weren’t creating chances, but it does nothing to ease the frustration of dropping points last night. Especially when all of the teams around us won. Leicester beat Liverpool, Man City beat Sunderland, Sp*rs beat Norwich, leaving us in 4th place and giving this season an all too familiar feel.

It’s impossible not to be worried that things are slipping away form us too easily, and it’s impossible not to worry that something deep in our psyche is playing a part in our recent form. The warm embrace of the bosom of 4th is where we feel safest and best. When leading the pack, when the pressure and expectation is ratcheted up, we can’t cope.

Last night, having taken just 2 points from 9, that pressure was on. You might point to all those chances created as evidence of a team that did quite well, and I can understand that to an extend. But I’ll point to all those misses as evidence of one that was only able to do half the job. I’d rather make one chance and score than see a half-dozen fantastic opportunities wasted.

Players who should be more than capable of applying the finish from the positions they were in were unable to do so when it really mattered. And if you’re a team with genuine title ambitions, you can’t let points slip away from you like that. I don’t think you can bumble your way to winning the league. If you talk to me about how many times previous champions won games late with injury time goals, or scrapping out a win when playing badly, all it makes me think is that those teams had the character required to do that. We don’t.

When we play badly we tend to drop points. When there’s pressure on, we drop points. Leading 3-2 at Anfield in injury time, we drop points. What difference hanging on there would that have made to our current run is speculation, but to me that game feels more and more like one which inflicted some serious damage on us from a psychological point of view.

We are not, and have not been for some time, been playing like a team that looks like it’s going to win the title. We’ve been clinging on by our fingernails a bit, and last night we slipped. We’re 5 points off the top, a couple of weeks ago we were 2 points clear. The chasing pack have caught us, overtaken us, and are mooning us out the back window as they speed on down the road.

So what do we do? Clearly we have to do something. 5 points is not insurmountable, especially when we have Leicester to play in a couple of weeks time, but it’s going to require something more than we’re seeing right now, and for the manager to take some risks.

He simply has to find a way to make the midfield function properly again. If I see Flamini and Ramsey together for any other reason than all the others are dead, I might scream. They both try hard, but the limitations of that partnership have been demonstrated to the point where the opposition must be licking their lips every time they see it. Get Coquelin back in. Give Elneny a run. Find a way to make it work, because that will make the team better.

Be brave in other areas too. Theo Walcott came on and played 34 minutes of football last night and made 2 passes – he attempted a massive 3. I know he’s not there to play like Iniesta and tika-taka his way across the pitch, but that’s a ludicrously poor contribution to make in that amount of time. He had a shot from which he should have scored, and made one nice cross, but that’s not enough. It’s clearly not enough because we dropped points.

And before I get pulled up for having some kind of Walcott agenda, I’m not trying to blame him for being something he’s not, but maybe we can see that what he is just simply isn’t sufficient for a team that needs players of his stature and position in the squad to do more.

People often ask if you can win a title with Olivier Giroud as your main striker. Ignoring his 18 goals this season (to Walcott’s 5), and leaving aside the fact that having a seriously clinical finisher would undoubtedly make this team more efficient, maybe a better question is can you win a title with a player like The Walcott in your team at all. To me he is emblematic of us at our most insipid, and waiting for him to ‘come good; is a fool’s errand. He’s had 10 years! We know what he is at this point, and to win titles you need better.

And that falls on the manager. His belief in the best of what players can be is admirable in some ways, but deeply frustrating in others because it protects their inconsistencies, and those are the things that hold us back. He’s got to be brave. He has to shake off the conservatism that made him think Flamini and Ramsey was the right choice despite now having options.

Because if we don’t do something different, something to spark us into life, and something to help us start winning games again, this season is going to end up being the one where the patience is stretched to its absolute limit. To be in the position were in a few weeks ago, and not continue that title fight until May, cannot be viewed in any other way than a total bottle job.

It’s not over, there are still plenty of points to play for, but it feels like we’re pin-wheeling on the edge of a cliff right now. We either right ourselves and get going again, or we fall right off it. Sorry if that’s all a bit miserable this morning, but that’s just how I feel. We’re letting a great chance slip. It’s slow motion car crash stuff. I hope we can sort ourselves out, but try as I might it all feels a bit: