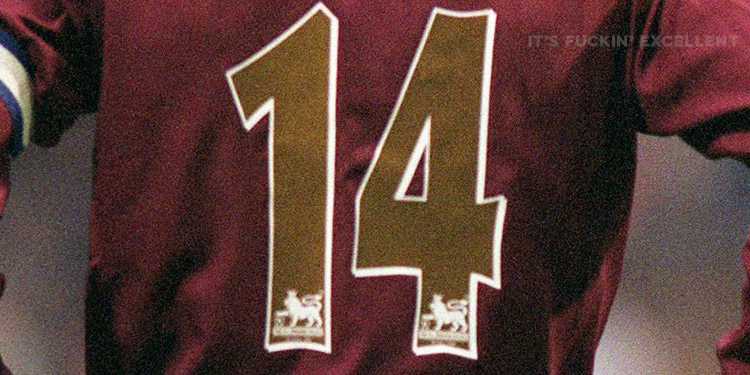 On this very day fourteen years ago, I sat down at my computer in my office in Spain. It was probably warmer than it is here in Ireland today … I really miss being warm most of the time.

Anyway, my big bulbous Mac monitor, like a gigantic first edition iMac kinda thing, sat in front of me. I fired up Dreamweaver, opened up the horrendously designed thing I’d put together, and belched into the world the very first ever Arseblog.

Feb 27th 2002 – The A R S E B L O G is born amidst a fanfare of pure silence and a rippling of no applause. Not sure what way this thing is going to go, it has no plan, no direction, no aim, no purpose – simply a tool for me to ramble on about all things Arsenal and maybe some other stuff instead. Anyway, I shall crack on.

It took a little bit of time to settle into a routine, but there’s been something on this site almost every single day since. There were a few missed in the early years due to stuff that was more important than what I thought about football, but now it’s set in stone.

This is my morning:

Every. Single. Day. Arseblog Tom does fill in from time to time when I allow myself some time off, but that’s the way my morning goes. Sometimes people ask me how do I do it every morning, and while it’s not something I really think about, the answer is simply: it’s what I do. I Arseblog. I blog Arse. BlogArseMe.

I was saying to my Dad the other week that if I had to go back out into the world and get an actual job, I have no idea what I could apply for. Yes, I did some time many years ago in mind-numbing middle management, but any kind of interviewer would ask, “So, what have you been doing for the last 14 years?”, and I’d have to answer “Writing about Arsenal on the Internet,” at which point he’d back away slowly because it does sound kinda mad.

But it only sounds kinda mad, it’s not though. It’s good. I might be slightly institutionalised having spent all those mornings for all those years doing the same thing (except it’s never quite the same although sometimes it is when it comes to the Champions League and finishing fourth and that), but I’m not so crazy that I would keep doing something that I didn’t enjoy or get some satisfaction from it.

It can be trying, there’s no doubt about that. While I like to think we – and there’s huge credit required to people like Tom, Andrew Allen, James, Tim Stillman, all our columnists and correspondents, and Steve our esteemed hosting dude (if you need web hosting, use that link!)* – have built something pretty great over the years, there are people who are sent to to test you.

Our comment policy on Arseblog News, for example, aims to keep the conversations as reasonable as possible within the confines of football discussion online. There are some people who don’t want to adhere to those guidelines, and that’s fine. There are about 4000000400049884 other Arsenal blogs and podcasts out there, and I’m sure they’ll find one that suits them better than this one.  There’s something for everyone out there on this great big Internet of ours!

There are also people who don’t like what we do, and that’s also fine. You can’t expect everyone to agree or to be a fan, but 14 years of this means I don’t care if you don’t like it. I’ll do what I do and if you’re into it, great, and if you’re not, I’m not going to cry or chase you down the street and beg you to reconsider.  If you’re not a fan of what you get here 24/7, then there’s probably some other stuff out there for you to enjoy, rather than get stressed out by reading something you don’t like. Why would anyone do that?

But those are small issues. As I said, it’s good. The people are good, the readers and listeners and connections and conversations are good. The friends I’ve made, the people I’ve got to know, it’s been good. And I hope it remains that way for many more years to come.

Of course, none of it would be worth doing if it wasn’t for you guys reading and listening, commenting, emailing, Facebooking and Twittering, and everything else. So thank you for being with us day after day, week after week, year after year, MORNING AFTER MORNING.

I found the Arseblog 7 image I used. That’s 50% of the age of the blog ago. It seems like a long time. Maybe it is, I dunno, but time kinda flies when you’re measuring it in daily 1000 word articles about Arsenal Football Club. 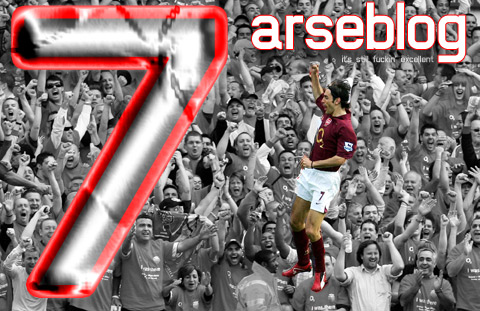 People do ask how they can help support the site, and the answer to that is simple: buy our books (when we publish them – must do another one!), get some merchandise if you like, and what’s going to be increasingly important as ad-blocking software becomes more prevalent in the future, please consider white-listing this website.

I understand completely why people use ad-blocking software. Too many site use too many noxious ads, with pop-ups, pop-unders, pop-sideways, things that obscure the content, ads with fake close buttons which make you open up another ad when you click them, auto-playing videos and all the rest.

I hate them as much as you do, which is why we don’t allow those kind of ads on Arseblog. If you see them, it’s because a sneaky advertiser has done something unscrupulous and we’ll block them straight away, like we did this week when a well known NOT TAXI firm started directing people to download their app. I’m not a RUBE. We blocked them straight away, and will always do that, so please feel free to contact us if you ever see anything like that.

However, those kind of ads, and those tactics, are making it increasingly difficult for decent publishers, and it is a worrying time. We are dependent on advertising revenue, as are many of the sites you read every day. If you block ads on all of them, chances are those sites will find it increasingly difficult to provide you with the content that you love so much. So, think about it as something bigger than Arseblog.

Think about all the sites you read every day, and the people who work hard to write and create something for you, usually for free, and considering white-listing them in your ad-blocker if you use one. Because it will make a difference and you can then continue to enjoy what they provide.

Thanks again everyone, catch you tomorrow for a full match preview as we head to Old Trafford.

*Apologies if I missed anyone out, it’s still v early. I’ll buy you a beer next time I see you.