Joel Campbell fumbled about a bit with his shorts but finally he was able to whip it out. It was a diminutive thing – a dummy, which he tucked beneath his kit tied to a bit of string and formed part of his celebration after his first two Arsenal goals – the gesture to commemorate the birth of his first child, Brianna. She’s almost two years old now but Joel Campbell has had to wait a long time to share the joy with the Arsenal fans. Since then, the Costa Rican has progressed rapidly, looking to make up for lost time, and has become a pivotal member of the first team.

Looking back to the start of the season, it was hard to imagine that Campbell would make the breakthrough considering the number of attacking talents ahead of him. But often that brilliant change of tack, which can transform a career or the fortunes of a team, comes from luck and happenstance rather than a sudden, piercing insight. And Wenger, having failed to find potential buyers for Campbell – and losing key players to injury – decided to keep him on until the new year before reassessing his position. Campbell’s chance came earlier, in the fixture against Swansea City, after a couple of false starts, and has never looked back.

What’s his greatest quality? It’s hard to choose one because Campell’s talent is multi-faceted. He initially came into the team as a grafter with a hard shot but since then he has shown more than that. He’s dribbler and a goalscorer, particularly coming in at the back post, but most impressive has been his ability to pick a pass around the corner for a diagonal run.

Campbell first displayed his vision in the 3-0 away win at Olympiacos, surprising everyone when he jinxed away from two defenders then playing a pass that bisected the penalty area for Olivier Giroud to run onto. Notice the way Giroud reassesses the run that he was going to make, initially hanging back on the edge of the box as Campbell sold his first dummy, then as he opened up his body, sensing the space to run into. Campbell’s swivel of the hips is excruciating to watch, a sharp jolt that could have seen him buckle under the weight, but he was able to keep his balance to send an inch-perfect pass to Giroud’s way. He repeated the trick twice in the 3-3 draw against Liverpool, first slipping through Aaron Ramsey to set up Arsenal’s opener, and then helped create another when Giroud turned and finished the Gunners’ third.

His team-mates have seemingly thrived off his ability to provoke, and indeed at one point, from being the one who reacted from other players’ good play, he’s become an instigator now, driving at opponents and delivering key passes. With that performance in Athens, he earned his team-mates respect which, as Adrian Clarke writes, takes time, highlighting Campbell’s persistence.

As Clarke writes,” It doesn’t matter if you are a new signing or a promising kid that’s been elevated from the youth team; it doesn’t matter if the scouts or coaches think you’re the greatest thing since sliced bread; if the big guns in the first team dressing room aren’t sure if you’re good enough to contribute, it’s impossible to feel at home.”

Campbell might feel he now finally fits in and the challenge now is to keep his place. With Alexis returning, his position is under threat – although Theo Walcott might fear for his place due to his recent form. In the Chilean’s absence during December and January, Arsenal’s style of play adjusted slightly to become more direct, with the ball going up to Giroud more often, and the Frenchman has thrived, relishing the chance to become a pivotal factor in moves.

In the draw with Liverpool, Petr Cech to Giroud was Arsenal’s most fruitful combination at 15 times, and when he got the ball, he usually gave it to Mesut Ozil, playing 10 passes to the German. Giroud looks more mobile now too, perhaps as a result of a direct style that means he’s not just waiting for the ball to come to him, but anticipating that it will come to him at any given moment.

Playing in the middle of the front three, he’s stoked up a good partnership with Campbell and Theo Walcott, usually trying to knock the ball down for the latter from goal-kicks while getting onto the reverse passes from Campbell. The understanding between Giroud and Campbell was displayed in the 0-0 draw with Stoke City – which I’m contractually obliged to talk about and after this will say no more – when the only real Arsenal chance of note was saved by Jack Butland.

The only thing of note that happened for Arsenal against Stoke. Thought Bellerin was much better in the build up pic.twitter.com/QqD07MChDH

For the most part, the trio has worked though at a cost of technical balance which showed up in the games versus Southampton (0-4 loss), Newcastle United (narrow 1-0 win) and Stoke City. Campbell’s adaptability has been key because it has allowed Arsenal to minimise some of this loss because he combines so well with his team-mates. He’s not quite the playmaker that Ramsey was on the right nor the explosive talent that Alexis is on the other side and probably not even a mix between either. I’d describe more of an outlet, somebody who stretches the pitch and then in the final third, combines efficiently and effectively. 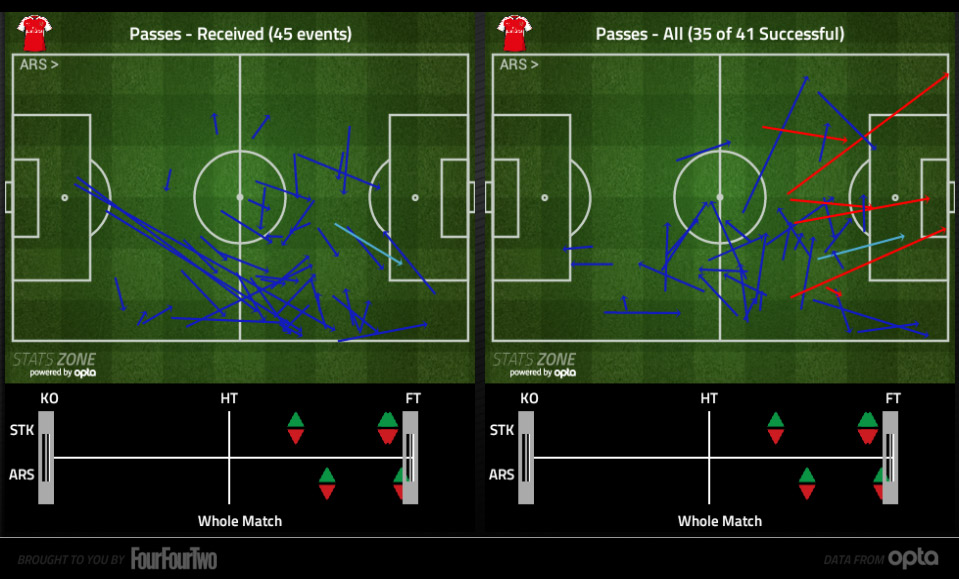 That’s been important to Arsenal because often there’s a structural deficiency in the way the Gunners try to build up which relies on quick dribbling under pressure and the opponents’ reluctance to press. Campbell, though, remains very disciplined for the most part, hugging the flank and opening the middle such that Arsenal can pass through. Alexis does a similar job, and together, might form the balance that Arsenal need to offset some of their flaws, while still being very dynamic. (My personal preference, if everyone was fit, would probably include Jack Wilshere on the right though I’m aware that might slant too much towards the indulgent).

It’s perhaps pertinent that I talk about Arsenal’s front three because in a month from now they play the team which has the best triumvirate in the world: Barcelona. If Joel Campbell does start then it would cap up what has been a whirlwind half a season, and a chance to prove that finally he does belong at this level.

Previous articleA loan again, naturally
Next articleThe Why of Walcott