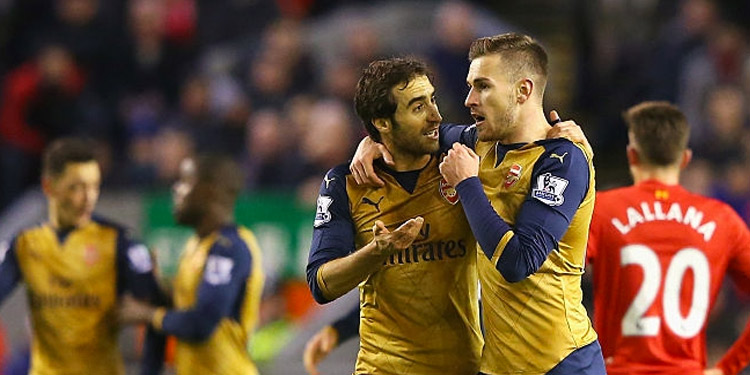 For the second successive season a late goal at Anfield denied us three points. Last season you’d have been hard pressed to say we deserved the maximum return from a game in which we were dominated; this time around the sense of frustration is greater because at 3-2 up in injury time we certainly had the personnel on the pitch to see out those final minutes.

Liverpool began the game brightly, and took the lead around the 10th minute. From a corner Theo Walcott’s silly decision to dribble the ball out of his own area was compounded by that most Walcott of mistakes, a clumsy, miscontrolled thwack of the ball straight to the opposition. Emre Can shot, Cech saved, but Firmino was there was pick it up and crack a shot between Koscielny’s legs.

Despite the fact they were playing well the lead lasted just four minutes. Joel Campbell brilliantly controlling a dropping ball before slipping Aaron Ramsey behind the defence and the Welshman’s finish at the near post brought the scores level.

More carelessness saw Mathieu Flamini lose the ball in midfield, Liverpool got a bit lucky when the ball rebounded twice off Campbell, and as good as Firmino’s finish was – and it was really good – we stood off him, allowing him far too much time and space to pick his spot. We were ragged defensively and in midfield, but once again we got ourselves back on level terms.

After a Ramsey lob had been cleared off the line, he took a corner from the left hand side. It wasn’t a great delivery really, but Olivier Giroud’s propensity for little flick finishes from the near post came in very handy as the touch he got on the ball was enough to send the ball into the net via Mignolet’s legs. 2-2 after 25 minutes, and quite how Giroud failed to make it 3-2 minutes later is anybody’s guess.

Campbell was involved again, he fed Walcott whose low cross should have been turned in from inside the 6-yard box by the Frenchman, but somehow he got just ahead of the ball, a huge let-off for Liverpool. There was one for us too when a Firmino shot skimmed the top of the bar just before the break, and the teams went in level at half-time.

Any thoughts that both teams might try and rectify their defensive issues were forgotten early in the half as Campbell for us, and Moreno for them, had chances to score. Perhaps it was Liverpool being unable to press as much, or us coping with it better, but we were improved in the second period, taking the lead 10 minutes in.

We moved the ball well from left to right, Bellerin left Milner for dead, again Campbell was involved, his pass deflecting to Giroud and you can take nothing away from the quality of the goal he scored. The touch and turn left Toure twisted inside out and the finish into the bottom corner was absolutely first class. He’s a player in superb goalscoring form right now.

There were shots a-plenty at our end of the pitch, rather too many of them as Tim outlines in his By the numbers piece (14 allowed on our goal from the 56th minute onwards), but also chances for us to take advantage of a Liverpool side that were leaving space for us to exploit on the break. Walcott’s decision making was poor throughout, and Oxlade-Chamberlain, on as a substitute ,really should have done better than run straight into the most immobile man on the pitch when we had this fantastic opportunity to get the goal that would have almost certainly killed the game:

Those are the fine margins you have to master in games like this. When you squander good opportunities, you leave yourself open to punishment and that’s exactly what happened. Having brought on Ox, Gibbs and Arteta, the plan was obvious – ride the storm, see the game out, and I understand why people point to those changes as a factor, but the reality is we make those kind of changes all the time in games in which we’re hanging on, and for the most part they’re successful.

For the equaliser I don’t even think it was down to the subs. A home team that’s behind is always going to put pressure on you, bombard you to try and get the goal. It’s up to the defence to deal with what’s thrown at them, and we didn’t do that with that ball. Benteke pulled off Koscielny who should have been tighter and out-jumped Monreal; Bellerin was just half a second too slow to react to the run of Joe Allen, and his shot had too much on it for Cech who couldn’t keep it out despite getting a hand to it.

Really, really annoying, not simply because we dropped points from a winning position, but also – for me at least – it made me worry that the team felt somewhat haunted from last season. Different manager, different players, but the same fragility at the end. We certainly had the experience on the pitch to be able to see that game out, that we didn’t is a worry.

My concern over the last few weeks that we’ve allowed too many chances on our goal wasn’t helped last night either. Although our record (in terms of results) since being forced to play Ramsey and Flamini together in midfield is actually quite good, the longer their partnership continues the more apparent it is that they simply don’t gel and that’s something we’ve got to address.

Perhaps the imminent arrival of Mohamed Elneny might be the thing to bolster that area of the pitch, and the manager is hoping that the Egyptian international will be available for the trip to Stoke on Sunday. Afterwards, Wenger said:

I’m frustrated by the result.  They need to transform the frustration they have in the dressing room at the moment to even more motivation for the next game. There is a lot of positives in the game and there is more positives than negatives in the game. I think what happened tonight should strengthen their belief that they have a big part to play in this league.

A response I understand, because I think he wants to lessen the psychological impact of dropping two points the way we did, but I suspect in private he’ll be a lot more angry about this than he is in public. Not simply the concession of the late goal, but the way we failed to take opportunities, and how careless we were on the night with the ball will concern him:

Arsenal's 71% passing accuracy is their worst in any Premier League game this season.

You wonder if fatigue is now playing a significant part. We look like a team that needs an injection of fresh legs. There’s the new signing, of course, and the hope that Alexis might be back this weekend, which would obviously be a real boost. How damaging these dropped points will be at the end of the season remains to be seen, but as it stands we remain top of the table, just not as top as we would have liked.

Still, there were positives. Giroud’s two goals were fantastic, and as somebody who gets through a lot of physical work on his own, for him to produce the way he did is a credit to him. And what a game Joel Campbell had. Not only did he contribute at the business end of the pitch, he was one of our best players defensively too, winning 5/6 tackles, the majority of which were in our half – which illustrates how switched on and willing to his defensive duty he was.

In recent weeks the question as to whether or not he’s overtaken Oxlade-Chamberlain for a place in the team have been common. I think on the basis of form that’s a no-brainer, but if Alexis does make his comeback against Stoke, there’s no question that Campbell deserves to keep his place in the team ahead of Walcott too who, despite a cracking goal against Man City, is showing why, when he has options, the manager is so reluctant to pick him out wide.

Now, we have to dust ourselves off and prepare for another difficult away trip, this time Stoke on Sunday. Never easy, even less so after a tough midweek encounter. We’re going to have to dig really deep.