Once upon a time The Potteries was a proud industrial area of Great Britain. In 1720, a local potter, Mr John Astbury, more of whom in a moment, discovered that by adding heated and ground flint powder to the local red clay you could create white or cream ware. An industry grew, and by the mid nineteenth century The Potteries comprised six towns; Tunstall, Burslem, Hanley, Stoke, Fenton and Longton. These towns make up the ‘city’ of Stoke-On-Trent. The Potteries were famous around the Empire for their ceramics. It became a centre of the industry, producing vast quantities of decorative or industrial items due to the availability of local clay, salt, lead and coal.

Mr. Astbury, a key figure in Stoke’s innovations and improvements in pottery, and something of a local hero, was a liar, and a thief. He “masqueraded as an idiot” in order to gain access to the works of other, more established potters, John Philip and John David, and to discover the secrets of their manufacturing process. So you see, Stoke people have only been pretending to be idiots since 1688. The deception of idiocy was used here because they are pathologically dishonourable. And so we turn to their foul arena, where Stoke’s modern day John Astbury, Mr. Ryan Shawcross, lurched about the pitch, halo intact, mother no doubt in attendance, with handkerchief pressed to her lips.

Mr. Shawcross, you will recall, broke Mr. Ramsey’s lower leg in twain back in 2010. It was a horrible tackle and Shawcross deserved to be shot at dawn for it. Mr. Ramsey was out of action for nigh on a year. This event precipitated a deep enmity between Arsenal and Stoke. On the one hand we have a team dedicated to artistry, athleticism and a dedication to the purity of football whose heroes are the most extravagantly gifted humans to ever have played the game, and on the other we have a team who maim and lunge and hoof, and whose hero was a man who could do long throw-ins. It has been an ideological battle, a kind of cold war, for the past six years.

I could take it not a moment longer after Stoke’s brainless, malicious and ungentlemanly chants at the weekend so I decided to take matters into my own hands. Our honour had been questioned and I demanded satisfaction, so I did what a gentleman must do.

This was sent immediately after the final whistle on Sunday (click to embiggen): 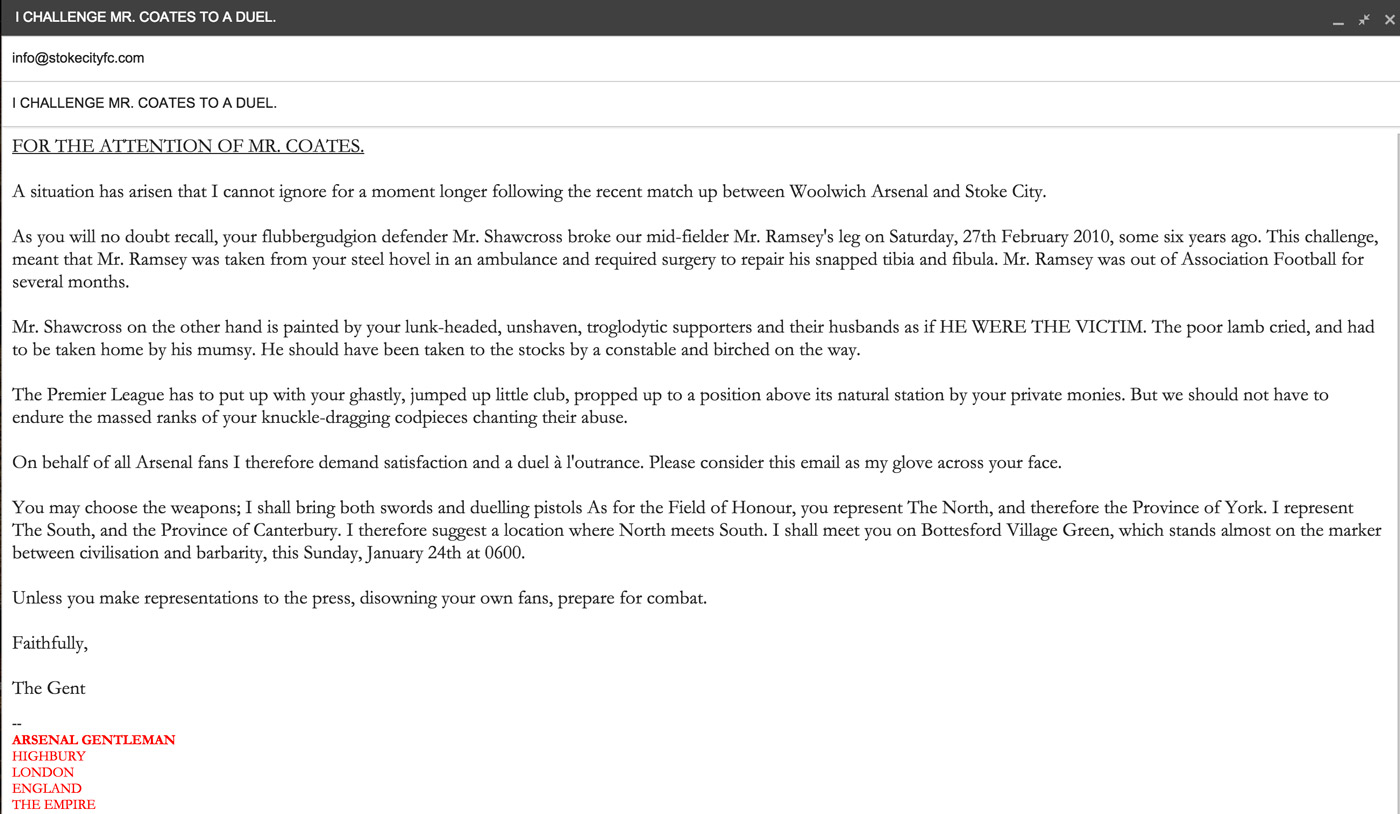 And lo and behold, this appeared in Monday morning’s rags: 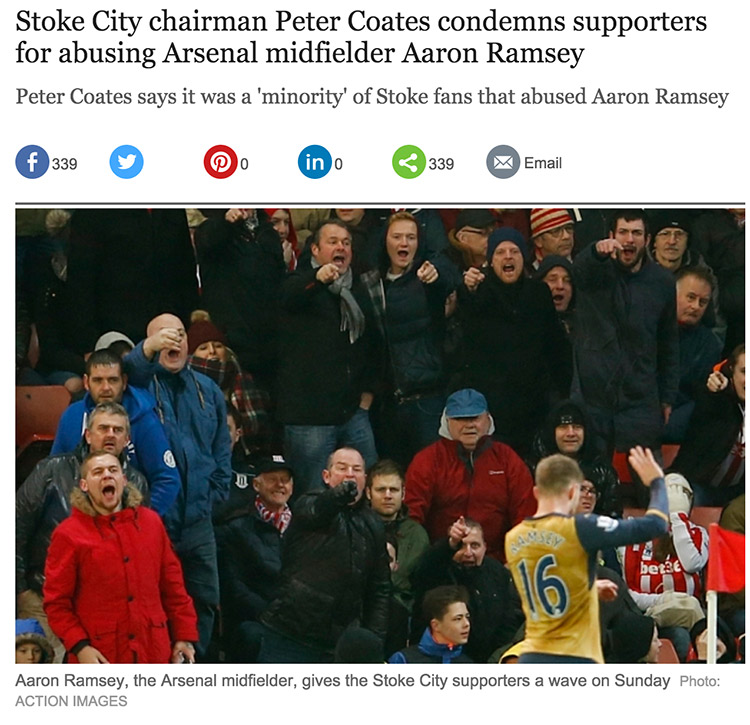 On fear of facing a duel to the death, he issued the statement. If such behaviour continues, I shall not delay in demanding satisfaction on behalf of Woolwich yet again. Anyway, enough of this flummadiddle from Mr. Coates.

As for the match, there was not much to remark upon. We drew, we scored no goals but we went top. We missed our sorcerer Mr. Orwell, who had a poorly toe. Mr. Oxlade Chamberlain impressed sporadically, forcing a save from the irritatingly impressive Mr. Butland – but this really was a Glove Butlers’ game, with Harry the Helmet impressing at the other end. We have lost just once in the preceding eight games – but we have have now picked up a mere six points from a possible 18.

Enough of the Stoke of the North, and to the visit of the Stoke of the South – FC Chelsea 2003, currently four point off the relegation spots. I have said it before and I’ll say it again – if we as a league work together, we can relegate them. If a resurgent Newcastle can win at Watford tomorrow, that gap will be just one point. The Football Association are doing as much as they can to help them look less awful (such as the eighth minute of injury time two yards offside debacle last weekend), but Chelsea are still looking pretty bad despite the assistance from the authorities.

We shall be well-prepared for them this time. Orwell and Saunders will be back in some form. If we can keep the snarling, cheating animal Mr. Costa in check, and prevent Chelsea’s players from surrounding Mr. Clattenberg and spouting their ghastly flitter tripe, we may be in with a shout. And with long-lost souls Welé, Cockleton and Robinson back in training, this run of games looks a tad less daunting than it did a few weeks ago.