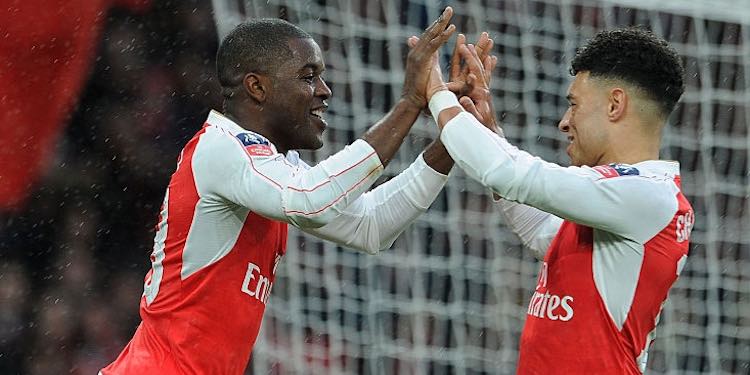 A few weeks back we played Sunderland at home and beat them 3-1 with goals from Joel Campbell, Olivier Giroud, and Aaron Ramsey. Yesterday it was the same result and the same scorers, albeit not in the same order, as we made our way through to the 4th round of the FA Cup.

It was a pretty entertaining cup tie all things considered, chances at both ends, woodwork being hit, some interesting individual performances from an Arsenal point of view and, of course, a win for us. Arsene Wenger did make changes, the double-Chambo in the centre of midfield the most notable, but there was a start for Alex Iwobi who was asked to play where Mesut Ozil usually does – no pressure there then.

The youngster acquitted himself really well, I thought. He’d played in the Capital One Cup against Sheffield Wednesday, but to make a judgement on any Arsenal player that night seems wrong, given the paucity of the collective performance. Yesterday he was bright and positive, and always available for the ball, which is a really good sign. What impressed me most was the pace of his passing. Sometimes when someone’s playing it safe, they roll the ball without much behind it, but Iwobi was happy to fizz the ball around and when you add some incisive running to the mix, he can be very happy with his day.

That we fell behind was down to a mistake from Laurent Koscielny. Even if the pass from Gibbs wasn’t great, he knows better than to try and mess around with the ball in that area of the pitch. He was robbed by Lens who cracked a shot past Cech to make it 0-1. A silly goal to concede really.

The lead lasted less than 10 minutes though. Nice build up play saw Walcott pick it up down the left, he drove into the box and pulled back a left footed cross for Joel Campbell to run onto. A couple of weeks ago he had a similar chance which he put over the bar, this time his finish was really excellent, using the pace of the ball to guide it into the bottom corner and make it 1-1.

Campbell was involved again in the second half, pulling the ball back across goal when perhaps he might have shot, while Walcott will be unhappy that he didn’t put us ahead from a rebound when Alex Oxlade-Chamberlain’s shot bounced back off the post. At the other end Fletcher hit the bar with a thumping header, Campbell again had sight of goal but the keeper made a great save, and once more Fletcher had joy in our box but could only head over.

Arsene Wenger sent on Ramsey and Mikel Arteta for Chambers and Iwobi, and almost immediately the Welshman made an impact. Campbell’s lovely one-two with Hector Bellerin allowed the full-back space in behind, and his low cross was deftly turned in by Ramsey with his left foot. Bellerin was provider again a few minutes later, this time set free by a very nice Oxlade-Chamberlain pass, and I liked the way he looked to see where Giroud’s run was going before presenting him with a close-range chance that he just couldn’t miss. As he said afterwards, “No Ozil? No problem!”

Quite how the Frenchman wasn’t then awarded a penalty is still a mystery to me this morning. Apparently having your legs kicked out from underneath you as you’re about to take a shot isn’t worthy of a spot-kick. I assume this is another one of those new rules they’ve introduced to the game that we simply have to get used to. It can’t be because Martin Atkinson is woeful or anything.

There was even time for a full debut from our French-Australian wonderkid, Jeff “The Jeff” Reine-Adelaide, who might even have got himself on the scoresheet in injury time when Oxlade-Chamberlain found him in the Sunderland area. Next time I’m sure he’ll score, but the era of The Jeff has truly begun (and you can read what high esteem he’s held in by skipper Mikel Arteta right here).

When you play a Premier League team you are always going to have to work. We had a very convincing half and took over more slowly. In the first half we went one down and we had to find our way because we were sharp in midfield. After that slowly in the second half we took over, played in their half and scored great goals and created many chances.

It would be reasonable to point out that Sunderland too had some good chances which might well have changed the complexion of the game if they had a finisher in their side. It’s not the first time in recent weeks we’ve been slightly let off the hook by poor finishing, and Petr Cech did have to make a couple of big saves again. Still, when you consider the players that were missing could practically form a reasonable starting XI, it was all about the result again, and we did what we had to do.

It’s also heartening to see someone like Iwobi slot into the side as well as he did; Joel Campbell seems to be developing really well and growing in confidence; and after a poor run of form, I thought there were some encouraging signs from Oxlade-Chamberlain yesterday too. All in all, a good day, now we put it behind us and start looking forward to Wednesday and a trip to Anfield.

More on that as the week progresses, James and I will be here with you tomorrow with an Arsecast Extra, enjoy the rest of your weekend.