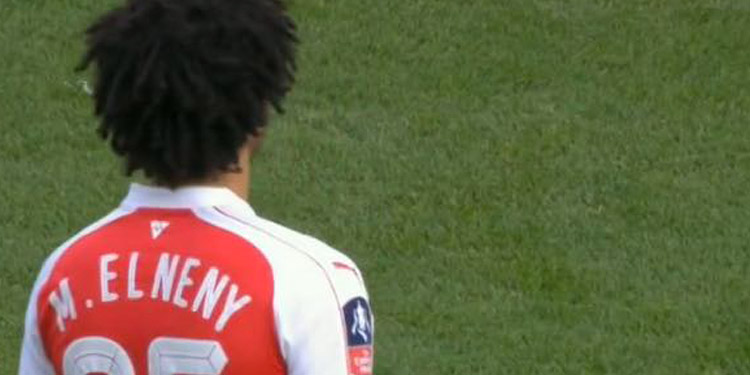 Arsene Wenger made nine changes from the team that lost to Chelsea last weekend, and the return of our most decisive attacking player, Alexis Sanchez, made the difference in the end.

There was a new look midfield with debutant Mohamed Elneny paired with the fit-again Francis Coquelin, and Alex Iwobi entrusted with the more advanced attacking midfield role. From the start it was a very open game, with both sides having a pop on goal before three minutes were on the clock.

Elneny clearly wasn’t tasked with the defensive role, he was popping up ahead of the ball, in the box, and his desire to make an impact was obvious with an early 25 yarder that was easy for the keeper. Arsenal peppered the Burnley goal, the ball was cleared off the line from a corner, and it felt as if a goal was coming. When it did though, it was a bit special.

We had the ball at the back, Ospina played it out, and from there we kept possession for about 2 minutes, probing, looking for an opening. Alexis was the man who found it, between the legs of a Burnley defender, and the finish from Calum Chambers with the outside of his right foot was absolutely top class. He might have been at long-odds to be the first goalscorer, but the cohesion from a team which had so many changes was quite something.

Clean sheets have been hard top come by in recent times, so it was no surprise when Burnley equalised. We struggled to get a corner properly clear, not helped by Kieran Gibbs bizarre slip and slide-tackle on Coquelin, and when the cross came in Gabriel was out-jumped and a static Ospina had no chance of stopping the powerful header.

Oxlade-Chamberlain ought to have scored before the break when good work from Iwobi saw the ball come to him at the back post, but he shanked his shot wide. He did make up for it not long into the second period though, providing the final ball to what was another really excellent Arsenal move, with Alexis applying the finish to what turned out to be the winning goal.

There were a couple more efforts on goal from Elneny, one of which was a great chance from inside the area; Burnley didn’t really threaten until Joey Barton came on and that was only the usual cowardly foul play from him; there was a welcome return for Tomas Rosicky; a decent cameo from Mikel Arteta; and an injury time chance for Theo Walcott to regain some confidence by scoring, but one on one with the keeper he made a pig’s mickey of it.

Still, considering the personnel, the new on-field relationships, and so on, it was decent win, and one we deserved overall. Afterwards, the manager said:

We needed to work. They had one or two opportunities on the counter-attack but we managed to win the game and we looked quite in control at the end. We needed to keep our focus, our urgency until the last minute.

And on new boy Mohamed Elneny:

I felt he started a bit cautious, played a bit secure. He became more adventurous, he had some good shots on goal. His mobility, his work rate was exceptional and for the rest, he needs to adjust to the power of the game in the Premier League. This was a good welcome today and certainly he has learnt a lot today. It will take him some time to adjust to the power side of our game here, but the intelligence, the mobility and the technical level are good.

I thought he had a decent debut. The point Wenger makes about him needing to adjust to the physicality of English football is spot on. A couple of times he was a little surprised by that, but he’ll pick that up quickly, I’m sure. He looked tidy on the ball, if a little conservative at times – but that’s understandable given it was his debut.

He seemed to click quite nicely with Coquelin too, as Tim points out in the By the numbers column, and overall it was a good first outing for him. Given that we only have this 90 minutes on which to make an assessment, it would be foolish to make any definitive judgements, but he certainly looks like somebody who can play a part between now and May.

It was good also to see Alexis back, ultimately he’s a match winner and he did just that yesterday. There were moments of rustiness, as there were with Coquelin, but given both have spent two months out injured, that’s not unreasonable. Having them back in the squad and available is a real boost, and hopefully yesterday’s game can be the thing that gets us going again. We have a big game on Tuesday against Southampton, so that little confidence boost from a win could well be important.

Also, a quick word for Alex Iwobi who really does look like a prospect. Arsene Wenger isn’t averse to playing youngsters, we know that, but generally speaking when they’re midfielders or attackers, they’re put out wide. That Iwobi was played centrally ahead of the much more experienced Oxlade-Chamberlain probably tells us something about how the manager views him and his talent.

All in all a decent day’s work, with plenty of positives to take from it. We go into the draw for the fifth round which takes place later today, and now we get ourselves ready for midweek Premier League.