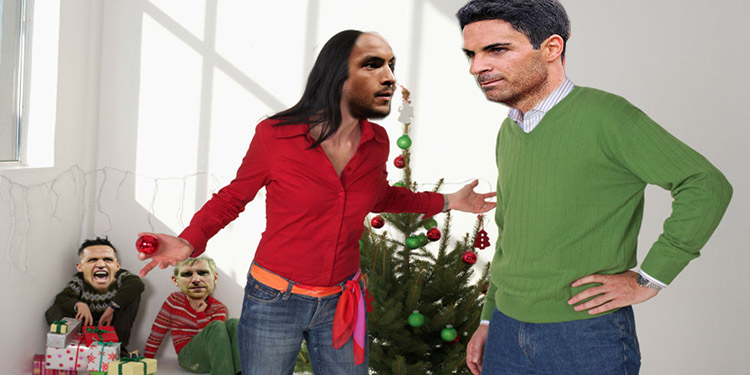 As expected yesterday was a quiet day. Literally nothing happened. Well, of course stuff happened, just not from an Arsenal point of view.

The players have had some time off this week, they even had a party where they danced, made merry, and got over the difficult Kris Kindle/Secret Santa situation that went down at the training ground. In a move that was supposed to augment team harmony and togetherness, the whole thing has been shattered by the giving and receiving of sarcastic gifts between players and staff.

Of course it was ‘secret’, but that has only added to the tension because now everybody is looking at everybody else with suspicion, eyes furrowed with distrust and leeriness.We don’t know exactly who gave what, but an Arseblog Insider source was able to tell me what was received. These are some of the gifts that were opened on the day:

David Ospina – A set of drum-sticks that came with a home made pamphlet entitled, ‘How to learn drums while you wait’.

Mathieu Debuchy – An open-ended train ticket to Newcastle, and a bottle of Penedès cava. The latter being the greatest insult, what with Debuchy being a Champagne connoisseur.

Per Mertesacker – Bag of speed.

Mathieu Flamini – Life size print of Alexander Hleb. This, apparently, caused Ozil to storm off and lock himself in the bathroom for two hours before being talked out of it by Mertesacker who was unusually chatty and dancing to music nobody else could hear.

Theo Walcott – A t-shirt with the slogan ‘You’re no JK Rowling, no!’

Tomas Rosicky – A 12-month voucher for ‘Señor Care’, a at home Spanish-based hospice service for the elderly. Rather than move into strange accommodation, they send someone to live with you to ensure you can live out your final years at home.

Aaron Ramsey – A pig’s leg and a ball of twine.

Olivier Giroud – A jewellery box engraved with ‘Something for your misses’. Missing the point entirely he gave it to his wife.

Petr Cech – A set of sheets. Three clean, the last Trainspottingly dirty with the West Ham logo stitched into it.

Arsene Wenger – A book voucher with a note ‘I hope you can find something that you will enjoy reading. Books are very nice. They have words in them and you can read the words and there’s a story that has a start, middle and end. Some of the best books are even made into films sometimes, and it’s nice to go to the cinema too, but you’ll often find that there are differences between the film version and the book but that’s because the director can have a different interpretation to the story than you, or financial or technological pressures mean it’s not always possible to stay 100% faithful to the original story. Best, . I mean, Someone Else. Not me. Best, Aaron.’

Kieran Gibbs – Tweezers with note, ‘For los splinters in your culo’.

Suffice to say, this was a feel-good exercise that did not go down well, the consequences of which are yet to be fully realised. Let’s hope they get things sorted before Monday night’s showdown with Man City.

Meanwhile, on Humberside, Chuba Akpom reacted rather angrily to being substituted during Hull’s 2-1 win over Reading last night. You can see a clip here, and the caption says ‘The Hull City striker threw his gloves away in disgust as Steve Bruce took him off.’

Threw his gloves away in disgust! The only way that could have been bettered is if he had played the game wearing a trilby and also fired his hat away to display his anger at the manager’s decision. It’s all just so … modern, or something. What if he hadn’t been wearing gloves? What would he have done then? Ripped his own fingers off? And why was he wearing gloves at all?

It’s the middle of December and temperatures are like that of mid-summer. It was 14C in Dublin last night. This is not glovular weather at all. Frankly, he should be fined for his obstreperous behaviour and given a wedgie for wearing mittens on a warm night.

Some will say that it ‘shows passion’, but it’s the wrong way to behave really. When you’ve got 1 goal in your last 11 games, your frustration ought to be directed inwards, not at the man who picks the team, even if you do disagree with his decision. He has the chance to play regularly, he should concentrate on making the most out of that because open shows of dissent are rarely a good sign.

Right, there’s not much else happening. Tim Stillman will be here with his column later, I’ll be back tomorrow with an Arsecast and everything that entails.