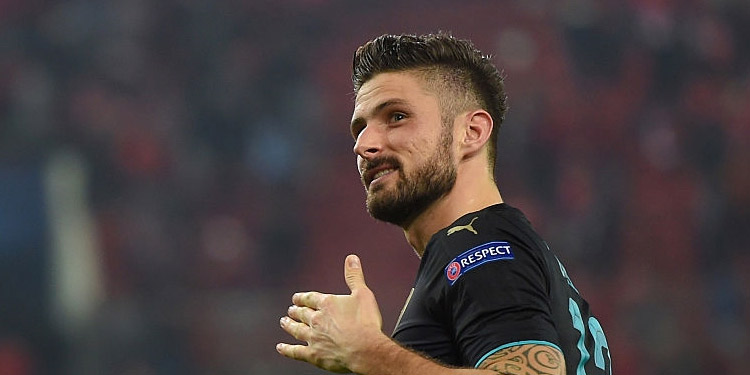 Down the years on this site there’s been a running joke that if Arsenal were given two options of doing something– the hard way or the easy way – we’d manage to find a third: the even more difficult way. So it was last night as we travelled to Greece having put ourselves in an unenviable and tricky situation, made even more unenviable and tricky by having to do it without some very important first team players.

I was hopeful, but when I heard them talk on BT Sport about how Mesut Ozil might have missed the game with a ‘tight calf’, I had visions of it all going wrong with the German’s lower leg ending up like something from the opening scene of Saving Private Ryan.

The opening stages were a little unconvincing, which didn’t much add to the confidence. We looked a bit lopsided on the flanks, the centre of our midfield wasn’t quite right, and there were some early pot-shots on goal from the home side.

However, Arsene Wenger swapped Theo Walcott and Joel Campbell around, with the Costa Rican playing from the right, and that helped matters. He set up Mathieu “What the hell are you doing that far up the pitch for mate?” Flamini after about 25 minutes, the Frenchman’s shot unluckily deflected onto the bar. It was the move which sparked us into life from an attacking sense though, because four minutes later we were ahead.

Ozil turned in midfield and with that laser-guided scalpel of a left foot dissected the right hand side of the Olympiacos defence with a brilliant ball to Aaron Ramsey. He then crossed with his left foot, Olivier Giroud nutted it towards goal and if he got a bit of luck with the finish that deflected in off the keeper, it was deserved for the quality of the build-up play.

Walcott had a sight of goal but his effort was dragged wide, while just before the break Laurent Koscielny diverted a cross from the right just over our crossbar. Considering how often we’ve conceded before the break having gone ahead, that felt like a moment that meant something.

It meant a lot five minutes after the break when the lead was doubled. Giroud won it midfield, Ozil played it to Campbell in the box who held it up, dragged it back, and played a, dare-we-say, Bergkamp-esque pass to the HFB who had continued his run into the box. The weight of the pass was such that he took it in his stride and finished with aplomb past the helpless keeper.

When you consider that just moments previously he had gone over almost completely on his ankle, it was a testament to the toughness that Arsene Wenger often references in regard to Giroud, but for which he doesn’t often get the credit. Sometimes it’s because he’s not always that tough, but last night he most certainly was.

So, that was that. 2-0 was what we needed to go through, but as a scoreline it was somewhat precarious. One Olympiacos goal would see them go through instead; one more Arsenal goal would mean they had to score three times to qualify. There was a chance for Walcott, but his shot deflected wide, and at the other end there were a couple of hairy moments.

Petr Cech had to make a good save, pushing a shot around his post, and there was a moment when one of their players had the ball at his feet with just the keeper to beat, but rather than finish he fell over. Which was nice. It meant that when a Nacho Monreal cross/shot was blocked by a defender’s hand in the box, Arsenal had the chance to put the game to bed.

There was no doubt as to who would take it, and Giroud’s penalty was perfect – the ball went one way, the keeper went the other, and he had his first hat-trick for the club. What a time to get it too, and let’s not ignore the fact that was a real pressure penalty. Score and you more or less guarantee qualification; miss and you have to play 25 of the most pant-shitting minutes you’ll ever experience.

After that Olympiacos knew they were toast, but what was very pleasing to watch was how hard the Arsenal players worked, even when it was obvious the game was won. Witness Campbell sprinting across the pitch in the final few minutes to close down their left back, that kind of attitude played a major part in pulling off what was a truly outstanding win.

It is a fantastic achievement for us. When you look at who we’ve lost in the last three weeks, we’ve lost Coquelin, Cazorla and Alexis among other long-term injuries, not many people gave us a chance. We are a real team. In the dressing room this team is very close and you could see that again today.

And on the hat-trick hero Giroud:

It was a perfect performance because he scored a header, one with a good combination thanks to a good pass by Campbell, and also a penalty on top of that. He was sometimes in uncomfortable positions but he fought like mad and he has shown skill and character. I always defended Olivier on the character side because he has always had something special on that front. He showed that in the game again today.

We needed somebody to step up last night, and hats-off to Giroud, he did just that. The timing of his first ‘triplé’ for the club was little short of impeccable, and when you look at how few our attacking options were yesterday, it was crucial one of the starting XI delivered. That makes it 10 goals in his last 12 games now, and while I realise he’s never going to be on some people’s Christmas card list because he’s not the ‘world class’ striker they want, it would do them no harm to appreciate a very, very good player in spite of that.

Beyond that I thought the collective performance was superb, as I mentioned, but a word for Joel Campbell who is showing that a run of games and the way that builds confidence can make all the difference. His contribution for the second goal was obvious, but it was just part of what was a hugely disciplined, hard-working performance. Kudos to him.

Also, I’m always a sucker for a top centre-half display, and if you want to teach a youngster how to play in that position, sit them down and make them watch Koscielny last night, absolutely brilliant. Strong, determined, and a nightmare for opposition forwards.

So, overall a great win and one that I hope goes beyond simply qualifying us for the knock-out stages of the Champions League. When you go away in Europe without Alexis, without Cazorla, without Coquelin, without Welbeck, without Wilshere, and with a half-fit Walcott, and you go and win like that, it ought to be a huge confidence boost to the team in general.

There’s a lot to be taken from last night’s result and performance. Qualifying for the business end of the Champions League is a big part of it, but I hope the benefits of it go beyond that. One to enjoy for the rest of the day, remember to check out the video page for highlights and other memorable moments.

That’s your lot, back tomorrow with an Arsecast and everything else.