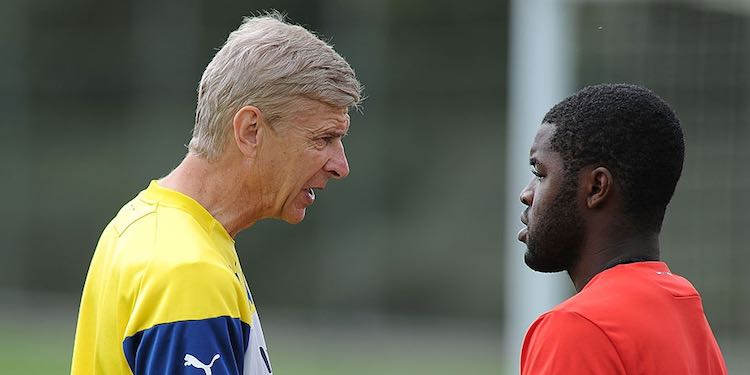 Morning all. I woke up late, it’s very foggy outside, so it all feels a bit weird today.

Probably not as weird as it feels for Joel Campbell who, after months of sitting around not playing at all, is now garnering praise from his manager and fans alike. Even aside from his goal, his performance against Swansea was very good. He did his defensive work, he used the ball pretty well, and when it didn’t quite work, he was conscientious enough to dig in and try and win it back.

Arsene Wenger admits it’s been tough for him, and that he wanted to leave in the summer. You would have to imagine that his fate hinged on Danny Welbeck’s knee. If he had been fully fit, chances are that departure – whether on loan or otherwise – would have happened. The boss said:

In our job, all you can do is be ready and when you get your chance, take it and I think he did. When he came back he was on the waiting list and finally he got the chance, I’m very happy for him.

As Tim Stillman pointed out on the Arsecast on Friday, to have a full international who has played at the World Cup and played full seasons in 3 of Europe’s big leagues as your 7th choice option for the right-hand side does show that there’s perhaps a bit more depth to the squad than people give it credit for. It’ll be interesting to see if the manager’s faith in him extends to Wednesday night and the trip to Bayern Munich.

That will be much a far bigger test for Campbell, and for everyone in fairness, but he’s done his chances of starting there no harm at all. It remains to be seen though if he can maintain some consistency in his performance level. Swansea was just one game, so we’ll have to wait to see if he can really give the manager something to think about when people get fit again.

As impressive as the win against Swansea was at the weekend, it’s clear that it’s already been consigned to history by the players. Job done, three points on board, now look ahead to the Champions League, and Per Mertesacker is warning his teammates of a Bayern backlash after the trouncing …*cough* …we gave them in the last game. He says:

They will be angry. We are the first team that really challenged them and beat them in the end. So they will try to show they are better than us. We showed that we can beat them. That’s a good sign but it will be a different game at their place. Both teams have got a good chance to go through to the knockout stages.

We improved our position in the last game but we need to get something out of this game. That puts pressure on us to perform.

We’ll obviously have more on that game as the week progresses, but I suspect it could be something of an onslaught made a little more challenging by the absence of Theo Walcott. In the game at our place, he was the way to relieve the pressure. His pace and willingness to run behind caused them problems, and obviously Olivier Giroud’s style is quite different.

That said, we’ve gone there with Giroud up front before and won, the Frenchman scoring early as we beat them 2-0 and were just a goal away from going through at their expense. So, it can be done, but it’s going to take one hell of an effort.  Speaking of Giroud, he’s got 7 goals so far this season, a decent return from a player who could have let his head drop given the circumstances he found himself in. He’s always been something of a streaky scorer, lets hope the next two games add to that – and the one he got on Saturday was 2000th of Arsene Wenger’s Arsenal reign.

So, overall a good weekend for us in the Premier League. It’s a shame Man City got their win so late, but there’s something kinda ace about a defender making a save like that Norwich fella did. It wasn’t up there with the dramatic dying solider of Steven Taylor’s from a few years back but it’s still fun. And of course there was more misery for Jose Mourinho as Liverpool beat Chelsea at Stamford Bridge.

That was followed by stories, allegedly from inside the Chelsea dressing room, that players would rather lose than win for their manager. I suppose you always have to take these kind of things with a pinch of salt, but in this case I choose to believe this one to be absolutely true. The only shame of the weekend is that the FA don’t seem to be willing to charge Diego Costa for his kick at Martin Skrtel. Surely that would have been the straw that broke the camel’s back and sent him well and truly off the deep end. Ah well, I’m sure it’ll happen soon enough anyway.

Elsehwere, I know I’ve mentioned Jamie Vardy before but I have to go on record again to say I love how he finishes his chances. None of this faffing about in front of goal, he just twats it in every time. It’s glorious.

And finally, congratulations to the Arsenal Ladies for their Continental Cup win yesterday, beating Notts County 3-0 in the final. Nice work!

Right, that’s about that. James and I will be here with an Arsecast Extra later this morning. If you have questions or topics for discussion, please send to @gunnerblog and @arseblog on Twitter with the hashtag #arsecastextra. We’ll have that for you before lunch.