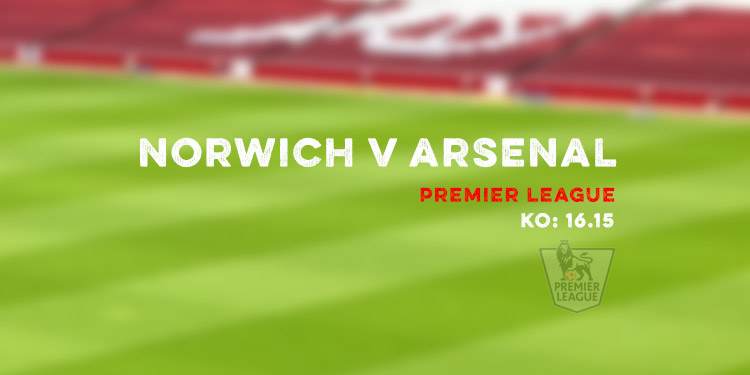 Another Premier League away day as we face Norwich late this afternoon. Yesterday’s results, in particular the 1-1 draw between Leicester City and Man United, mean that we could join the former and Man City at the top of the table with 29 points.

I can’t imagine there’ll be any significant changes to the team that beat Dinamo during the week. A fit again Aaron Ramsey should come back into the side – on the right hand side as we’ve been told – so the reward for Joel Campbell’s best Arsenal performance will probably be a place on the bench (more on him anon). Away from home though, the manager will probably prefer the added energy and stability that Ramsey provides, he did pick Kieran Gibbs away at West Brom.

Mathieu Flamini will continue as the Coquelin replacement, only an injury worry would change anything anywhere else. Last week he talked about not making mistakes and ultimately the two goals we conceded were down to poor defending, they were certainly avoidable anyway, and we’ll have to sharpen up today if we want to take all three points.

The midweek performance was really very good, hopefully restoring a little bit of confidence and belief after a period of games in which we hadn’t played particularly well. Alexis broke his goal drought, Ozil was sublime, Campbell very effective on the right, and there were signs that we had found a little bit of form again.

We are very united, that is my feeling over the past couple of years. We always build up something and now it’s time to prove we are capable of doing something. Doing great things means winning something where you need to be consistent for more than six games.

And that means responding to last week’s defeat by ensuring we take nothing less than three points at Carrow Road today.

Speaking of Joel Campbell, the manager has spoken about his recent run in the team in glowing terms, saying he has ‘smelt’ something from the Costa Rican forward. I’m too old for fart jokes really but that was the first thing I thought of. Still, about his recent performances, he said:

This season I didn’t want to loan him out because he has a genuine team attitude and he’s a fighter. I smelt something with him that is very interesting. He’s creative. I could see that but the creativity is linked with the confidence. You open your eyes when you feel really free to take the initiative.

When you are a player that never gets a chance and then you come in and get 90 minutes throughout October and November you have to show that you are in this team and that is not easy.

It’s always interesting when a player on the fringes starts to make an impact in the team. On the one hand there are those who will say you can’t make definitive judgements without seeing him play relatively regularly, and that’s fairly reasonable. On the other, when you have a player who is so far down the pecking order for a place in the squad when everyone’s fit, it’s hard not to draw some conclusions from that.

Of course the ‘when everyone’s fit’ thing is the crucial part, this is Arsenal after all, and that has opened the door for a few players in recent times. A midfield injury crisis afforded Francis Coquelin a chance which he took to the extent that his recent injury was met with genuine dismay from fans who, a year previously, would probably have given a resounding ‘meh’ to the same news.

Mathieu Debuchy’s unfortunate first season at the club provided Hector Bellerin with an opportunity that he has seized, becoming unquestionably the team’s first choice right-back. I don’t know if Campbell can do the same, but he’s giving it a try from a position where his participation this season always looked like it would scant.

Starting the campaign behind Aaron Ramsey, Alex Oxlade-Chamberlain, Danny Welbeck, Jack Wilshere, and probably Tomas Rosicky and Theo Walcott too, for a place on the right hand side, the injuries suffered by all those players have meant the manager had to call on him to fill the gap. I think he’s had some good games, and a couple of pretty indifferent ones, but then those poor performances haven’t been any worse than anyone else on the day – even if that miss against West Brom might have been a moment for him to really grasp the chance.

Perhaps though, playing fairly regularly has allowed him to tune into the team’s wavelength a bit more. He works hard defensively, he’s beginning to show some creativity (beyond the assist for Alexis on Tuesday he created two other very good chances), and maybe feeling part of things a bit more is doing him good – and ultimately that’s good for a team still missing some key attacking players.

It will be interesting to see how it pans out as those players start to come back. Already with Ramsey I think we have a clue as to the manager’s intentions, when he said:

It’s good to move Ramsey inside during a game and give Campbell the opportunity as well.

It means he’s going to be back on the bench, and how he responds to that, or how it affects his performances we’ll have to wait and see. It’s difficult to imagine him becoming as important as Coquelin or Bellerin, but maybe a more reliable version of himself to provide some attacking depth from the bench would be just the thing.

Right, time for some breakfast. As ever we’ll have full live blog coverage for you later on, check back for a post with all the info, or bookmark our default live blog page and updates will begin automatically. Kick-off this afternoon is 16.15.