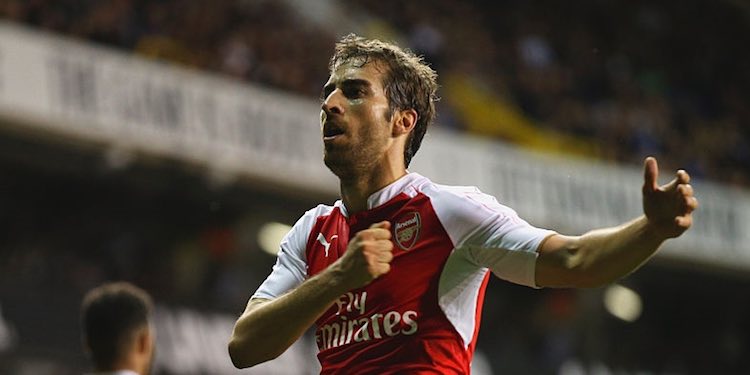 Mathieu Flamini, not content with saving the world by inventing a new substance which can replace oil in all its forms, he’s now going to save our season.

With Mikel Arteta’s calves currently crammed into small boxes and being fed milk in readiness for them being turned into veal, and Francis Coquelin’s knee ligaments twanged like hobo’s banjo-string, there’s a gap in the defensive midfield area and Flamini says he’s the guy who can fill it.

Speaking after the win over Dinamo Zagreb, he says that he’s relishing the opportunity to play more regularly having been, more or less, a bit-part player since his return in the summer of 2013:

I have an opportunity to be back in the team and I will try to prove every game that I can be in the team. Can I play twice a week for three months? I think I can but now it is my job to prove it.

Quite so. And, let’s be honest, he should have plenty in those legs of his because he hasn’t been played to the point of fatigue:

Fitness is hard to maintain. For an athlete, if you don’t play every week, it’s not easy because the more games you have in your legs, the better you become. You gain in confidence, you become better physically, so the possibility to have game after game is obviously going to be good for me.

And while some players would take a moment to qualify this next bit by suggesting they were sad for teammates whose injuries have opened the door, there’s none of that sentimental old guff from the Flamster, who says:

It’s a lot of pleasure for me that I get back into the team. The season is always very long so sometimes you have to accept being on the bench but sometimes you have the opportunity to prove you are still there and can still play in the Arsenal team.

Me me me me me me me me me me me (you may read this as Ben Kingsley’s NO from Sexy Beast if you wish). I like it. Let’s be honest, we’ve all been there at one time or another. There’s a bloke playing in your place and then he gets injured and you’re supposed to be all ‘Aww sorry guy, that’s tough’, but inside you’re all ‘YES! Hope it’s chronic and your leg falls off!’.

Now, I’m not saying Flamini is doing that … much, but I bet he is a little bit. Still, he makes a good point:

No arguing with that. It’s just that in this case people don’t feel the depth of the squad is sufficient to replace Coquelin in all his forms. But then if you’d suggested this time last year that an injury to him would have caused such consternation, you would have been laughed out of town. From nowhere … sorry, Charlton … came the answer to all our defensive midfield prayers.

So, is it possible that Flamini, having been spared the rigours of playing football very much in recent times, can dig deep into those glistening, muscley thighs of his, and use all that experience, know-how and desire to flatten people indiscriminately and play to the level that we require of him? Yes, it’s certainly possible.

Is it likely? Probably not. Chances are he’ll come in and do a reasonable job as he did the other night against Dinamo Zagreb, but with all due respect to those hopped-up narco-ghouls, I’m not sure they’re a real measure of how difficult the job is going to be at times. It’s when you play the likes of Man City, Liverpool and Chelsea that we’ll probably see the limitations in his game which have informed the manager’s team selections since he came back.

It’s why I still think that when Oxlade-Chamberlain comes back, and if he and Aaron Ramsey stay fit, we may see a change in the team’s dynamic. I wonder if he might try Ramsey and Cazorla as a kind of 2015 version of Ramsey and Arteta in 2012/13. It would certainly surprise me if the Welshman didn’t move back into the centre of midfield.

He might even view Flamini-Ramsey partnership as a way to go which, should it prove successful, will almost certainly result in a ‘Ram-Flam, thank you Ma’am!’ headline from me at some stage. I know you would expect nothing less.

There is the transfer market, of course, but with plenty of football to play before it opens, and the likelihood of a signing super-early in the window up there with me winning the Euro Millions and finally being able to afford my dream of own people and buying and selling them like commodities*, we’re still going to have to work with what we have for a decent period of time.

Obviously I would enjoy it greatly if Flamini could perform to as high a level as we want because ultimately that will mean we’ve got a better chance of winning games. No amount of being able to say ‘told you so’ is better than Arsenal taking 3 points week after week, so fingers crossed he can play his part.

It’s not just on him though, as a squad we have to show that we’re able to cope with the absence of an important player – being without one guy shouldn’t be a killer blow for our season, so let’s hope they can dig in and do just that.

Right, that’s your lot. Tim Stillman will be here with his mighty column later, more from me, including an Arsecast, tomorrow.

* By that I mean owning my own football club.

Wenger denies contract story, so where did it come from?

Arsenal 0-2 Barcelona: Doing ok, then we make a Messi of it