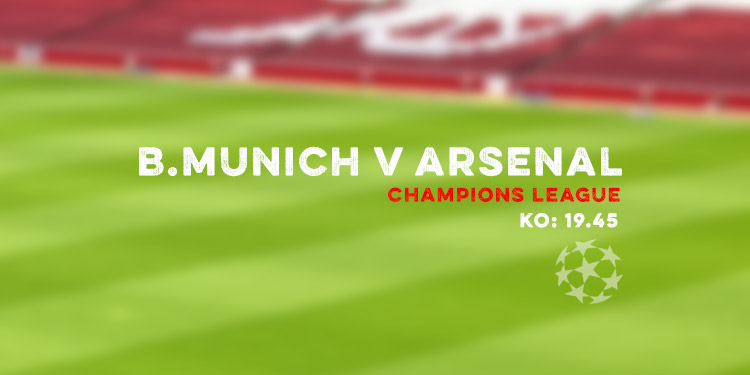 European action tonight as we face Bayern Munich in the Champions League, and even with the win over them a couple of weeks ago, tonight is one that we probably need to get something out of if we want to qualify for the knock-out stages. I know, mathematically, or arithmetically, it’s not impossible to lose tonight and still go through, but it would make it a much more difficult proposition.

It’s a job made more challenging this evening by the absence of Hector Bellerin, who hasn’t made the trip due to what the manager called a ‘small groin problem’. With a North London derby coming up on Sunday it doesn’t make any sense to risk him, and despite his struggles for form this season, we have a vastly experienced French international in Mathieu Debuchy to replace him.

His difficulties this campaign have been obvious. Having declared himself to be one of those players who has to be playing regularly to be at his best, he’s spent most of the season on the bench, and when he has been given a chance, he hasn’t looked anything like the player we know he can be. As with Joel Campbell before Swansea though, he got the backing of his manager who said:

I trust Debuchy, he is a 100 per cent educated player in the box and in training. Fortunately he played a full game against Sheffield Wednesday and physically he should be well.

Ok, he had a bit of a stinker in that game, but then so too did every Arsenal player. The pre-game confidence boost worked well for Campbell, let’s hope it does the same for Debuchy who faces a difficult night against the very tricky Douglas Costa and/or Arjen Robben. I wonder if it will also have an impact on the manager’s thinking about who plays on the right hand side.

Would Alexis offer greater protection? That would mean either Gibbs coming in to play on the left ahead of Nacho Monreal, or pushing Mesut Ozil out there to accommodate someone like Flamini in the centre of midfield. We’ll have to wait and see on that one.

Wenger is preaching defensive discipline tonight, and we know that Bayern are going to come and attack, looking for revenge for the defeat at the Emirates. The manager knows his team are going to be under the cosh, but wants them to dig in and, when the opportunities arise, try and cause the home side some problems:

Defensively discipline will be vital tomorrow, of course, but I think we have players with experience at the back and what is important for us is that we show that. We have a good togetherness and I believe we really a team who stick together when things don’t go well.

We will certainly have some uncomfortable moments during the game tomorrow night but … in good periods of the game we want to attack. When you’re Arsenal and have won everywhere in Europe, even here, it means we will try to win the game.

Defeat would put us in a very bad position which is why we don’t want to lose the game. We would still have a chance but it would diminish our chances to qualify. The best way is to not get in that position and to take points tomorrow night.

It’s going to be a difficult night, I think. The game-plan we had at home, using the pace of Walcott to give us an outlet, would suit a match away from home even better. It means the onus is on Olivier Giroud to make it stick when it comes to him, and others to provide him with the right support if we’re trying to push out from deep. With the quality of Bayern’s central defenders, and their high press – something Guardiola spoke about in his press conference yesterday – it really is going to be a challenge.

Having already said this week that he’d take a point tonight, I can’t see us approaching this one in a carefree attacking way. We know they’re going to have lots of the ball, we know they’re going to put us under some serious pressure, and our first job is to withstand that. Much like the game there in 2013, I think our first thought will be not to concede. Over the course of the 90 minutes we’re bound to have a sniff of goal, perhaps from a set-piece, so it’s trying to make the most of those moments that will give us the best chance of taking something from this one.

If we go hell for leather at them, they’re so good they’ll take us apart with ease, so I think we’ll see a cautious, disciplined, and counter-attacking Arsenal today. It’s a method that has worked pretty well for us in the past, so let’s hope that we can keep it tight back there, frustrate them for a while, and then you never know what might happen.

As ever we’ll have live blog coverage of the game for you – especially handy for those of you in time zones where kick-off time is also work time. You can keep right up to date with our text commentary, and chat with other fans if you like. Details later, or you can bookmark the default live blog page and check back at kick-off.

If you want to sign up for the chat, you can register an account here – there’s an annual subscription of £10, which works out at about 16p per game, so it’s reasonable value! That also signs you up for the comment system here on Arseblog, ‘The Arses’.

Right, we’ll have build-up throughout the day on Arseblog News, and after the game we’ll have all the match reports, player rating, stats, and video you could possibly want.