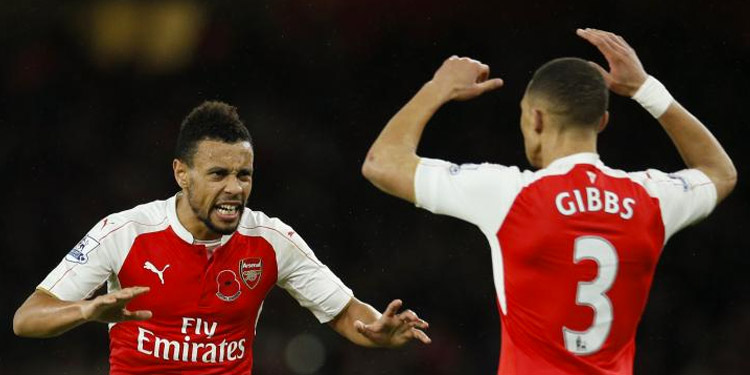 When Arsene Wenger took off an attacking player in Joel Campbell, and replaced him with a left-back who has hardly played this season, I’ll admit that I wasn’t expecting us to get back into yesterday’s game. I just couldn’t see where the goal was going to come from.

It wasn’t that we didn’t have chances. Olivier Giroud, in fine form up until yesterday, saw his radar off by a couple of inches, missing chances he should have put away. One header hit the bar, another whizzed millimetres past the post, he volleyed another over from a corner, and it felt like he was having one of those days he’s capable of having now and again.

In the end Kieran Gibbs proved the unlikely saviour, bundling home a Mesut Ozil cross at the back post with about 12 minutes of normal time remaining. It wasn’t the most convincing finish, nor was it the most beautiful goal we’ve ever scored, but under the circumstances it felt as good as any 30 yard volley or bullet header. It also shifted the momentum of the game, and we might have won it in the final stages, but I don’t think we can have too many complaints about a point in the context of the game.

The bright start we’d all hoped for, similar to the one against Man United, simply failed to materialise. As the first half went on it became increasingly obvious we were struggling. In midfield an unwell Santi Cazorla never got into the game at all, his usual precision replaced by dizziness and an inability to do the basics. From an attacking point of view we weren’t troubling them, and by the half hour they’d had four attempts on goal while we’d yet to register one.

This was my commentary on the live blog at that point (read from bottom up):

Doh. For the goal Laurent Koscielny tried to play offside when he really shouldn’t have. The fact that he almost got back to Kane anyway illustrated that. I also think the Sp*rs man got a bit lucky with his finish – if he meant to bobble it into the ground so it just skimmed Petr Cech’s leg it was a piece of genius, but I really, really don’t think that’s the case. Still, we ought to have defended that situation better, beginning with Danny Rose being allowed too much time to make a pass from around the halfway mark.

Cech had to save again from Kane before the break, and in the second period our keeper really showed his importance making a series of saves that kept us in the game. His impact on our defensive record seems obvious when you read this:

Arsenal have allowed 50 shots on target this season – that's more than Bournemouth (48) and Watford (46). Petr Cech earning his corn.

That only Man Utd have conceded fewer goals than us this season is a great thing, but credit has to go to our keeper for playing his part. When you look back on previous seasons and the goals/shots ratio we endured, Cech’s influence and importance becomes even more apparent.

Mathieu Flamini replaced Cazorla at the break, and added a little bite to midfield, but still it looked more as if they’d score again than we’d get an equaliser. Giroud’s misses were worrisome, because not taking chances like that in games like this often proves fatal. One of the things we have improved on in recent weeks is the efficiency of our finishing, so it was hard to watch the Frenchman squander those opportunities – especially when the only attacking option we had on the bench was youngster Alex Iwobi.

However, when you have Mesut Ozil you always have a chance. Despite the fact I felt he might have been stronger yesterday (although I think Sp*rs tactic of coming through back of him every time was one they were a little fortunate to get away with at times), his craft and creativity mean he can always fashion something dangerous for you.

So it was with the ball from that inside-right position to the back post for Gibbs to grab the equaliser, helped a bit by some shoddy goalkeeping from Hugo Lloris, so thanks for that mate. That created a new Premier League record, the first man to get an assist in six consecutive games, and over the course of the 90 minutes he created 7 chances for teammates. Those who dismiss that because some of them were from set-pieces are being wilfully obtuse, there’s a skill in good set-piece delivery too.

Even when we don’t quite get things ticking as a team right now, Ozil is still capable of making something happen, and that’s a great sign. It has generally been the case that he’s performed well along with the collective, but to contribute something to a result when most of those around him haven’t quite played to their potential is good to see.

When you are 1-0 down it is a mixture of relief and regret. I think if we were really clinical we would have won it in the last 15 minutes. But if I tried to be fair, I must say that the point is a fair result.

I think we have shown character today because we were a bit on the ropes and we responded.

On the one hand it’s disappointing not to play as well as we can, especially in a derby where a win could have sent us top of the table by two points. On the other, having played poorly I think there’s a positive to be taken from the fact that we still got something from the game. They played really well, we played poorly, and they still couldn’t beat us.

We really had to dig in and scrap our way to a point. That we made 50 tackles to their 28 over the course of the game shows that there was commitment and effort, and in the end that was rewarded by a goal from an unlikely, but very welcome, source. And on that it’s pleasing that a guy who has been on the fringes this season came on and had an impact. Obviously you have to look at why Kieran Gibbs is an attacking option in a game of this importance, but on the day itself his contribution was very welcome.

What is blindingly obvious though is how jaded we looked and how big a part the injuries are playing. Without any real way of rotating his squad to keep things fresh, some of the players appear very tired. Alexis Sanchez, in particular, looks like he could do with a couple of weeks on the beach with his feet up, instead he goes to South America to play international matches against Colombia and Uruguay. Hardly ideal.

However, the Interlull should give us a chance to get a couple of bodies back for what’s going to be a very busy and trying period. We got a result yesterday with a squad stretched to its limits, another day we won’t be so fortunate, so fingers crossed we can get players fit and keep them fit for the weeks ahead.

We’re still in a good position in the league, there’s plenty to be taken from the way we fought for a result yesterday, but much will depend on making sure we have the squad to cope with what’s to come.

As ever, James and I will have an Arsecast Extra for you later this morning. If you have any questions or topics for discussion, please send them to us on Twitter @gunnerblog and @arseblog with the hashtag #arsecastextra. We’ll have that for you before lunch.