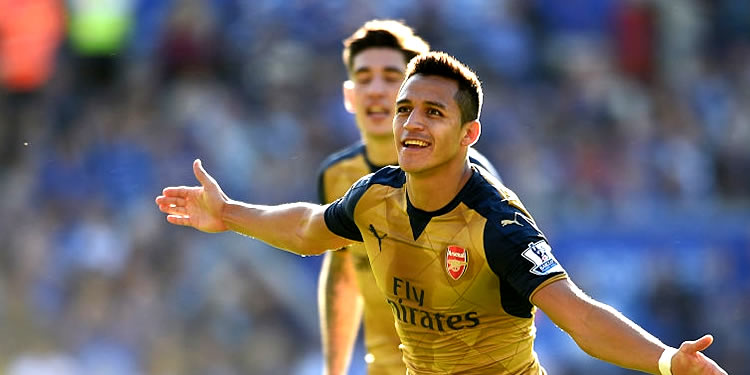 This Thursday morning begins with reports that Alexis Sanchez has agreed a new deal with the club. Naturally it includes some kind of wage increase, but I don’t think the significance of such a move is that he gets a pay-rise.

The news comes after reports earlier this week, or late last week, that Mesut Ozil was on the verge of signing a new contract too. If signing these players in the first place was a statement of intent, then securing their futures for what will be the peak years of their careers (©rhymebot2000) is is another one.

Ozil turned 27 in October, Alexis will be 27 in December, and the club’s two most expensive signings are undoubtedly players who will be integral to any future success we have. Such are the vagaries of contracts these days that if a player finds himself in the final two years of his deal, the balance of ‘power’, such as it is, tends to shift dramatically his way.

That’s not to say he won’t sign a new contract, but as much as possible you want to avoid situations like we’ve had recently with Theo Walcott where the expiration of the deal is used as a bargaining tool. Or, more pertinently, for another club to see what’s going on, offer a great big Jonny Bosman, and lure them away.

Of course that’s hardly an issue with Alexis, who only signed last year, and his new terms are obviously a reward for the impact he’s had since joining and for the quality of his performances. 25 goals in his debut season left him one short of Thierry Henry’s record debut campaign, and although I don’t think we’ve seen the best of him this season there’s an understanding as to why that is.

The demands placed on him at club and international level seem insane. Constant travel, summer tournaments, not enough rest, playing through pain and minor injury, it’s little wonder that he’s looked fatigued and short of his best at times. We can complain all we want about what Chile do and the scheduling of the Copa America, but ultimately we’re the only ones who can provide him with the rest that he needs.

For example, he doesn’t have to play 90 minutes away to Bayern Munich in a game that was lost by half-time. Building a more robust squad would mean that on his return from the Copa America in the summer, he could get a decent-ish pre-season under his belt rather than being chucked on in desperation in the opening game when we’re frantically trying to salvage something when it’s gone wrong.

The fact that he went 8 games without a goal is in some way down to him, of course. He found himself in good positions to open his account, but his finishing was wayward. However, that he lacked, dare we say a little bit sharpness in front of goal, was understandable. And when a player, even if he’s not at his best, gives you 100% commitment every time he plays then people can forgive that.

Had Danny Welbeck been fit then he’d probably have eased that burden a bit but even now it’s something it feels like we’re going to have to do. The fixture list gets ridiculously hectic in December and in order for him to get through that effectively I think we’ve got to consider resting him as much as possible in the next few weeks.

We ought to be able to start the Champions League game next week without him. We could look at games against Norwich, Sunderland, and Aston Villa as ones that we should be able to win without requiring him to play 90 minutes from the start each time. The away trip to Olympiacos might be a dead rubber by the time it comes around.

But then we face Man City and Southampton either side of Christmas, and January brings games against Liverpool at Anfield, Stoke away (always difficult), and Chelsea at home. In the shorter-term, with Rosicky, Wilshere and Welbeck still absent it’s more difficult. Their returns will ease the burden a little, but looking more strategically at it there’s also that weird and wonderful place called the transfer market to help with this issue too. I don’t see anything of note happening in January, but to get the best out of Alexis, and indeed the rest of the players, further investment in the squad seems a no-brainer.

It’s great to have these high quality players at the club, and spending those amounts of money on them is a sign that you’re looking for them to take responsibility and make the kind of impact the price tag suggests. But that doesn’t mean they should expected to carry the team, they need the right support, and hopefully that can be provided.

All in all though, good news if the contract extensions are in place. They’re important for the continuity of the team and will play a part in helping attract players of similar stature as and when we get our chequebook out again.

Not much else going on today, but we should get some team news later on. We’ll update you on that over on Arseblog News. I’ll be back tomorrow with an Arsecast looking ahead to the return of the Premier League and our trip to West Brom.