There was relief all around as Arsenal finally overcame stubborn resistance from Watford to prevail 3-0 on Saturday. Aaron Ramsey got his first goal of the season whilst Olivier Giroud once again made an impact off the bench to further his starting aspirations, but in the end, Arsenal were grateful to their superstar striker for eventually making the breakthrough and for sparking Arsenal to life.

Alexis Sanchez is a  player who nominally plays on the left-flank but is actually Arsenal’s chief goal-getter. His finish, shooting into the net via the post after Mesut Ozil was fouled in the box, came just at the right moment as Watford were tiring and their high-press became less effective. Up until then, it was more or less an even game, with Watford’s 4-4-2 causing Arsenal all types of problems. Although the home side lacked the quality that the Gunners showed in the end, as they mixed precision passing with rapier-like speed on the counter-attack to put Watford to the sword.

Until then, Theo Walcott had floundered up front, unable to use his pace to get into dangerous areas. He had one opportunity early on but headed too close to Huerlho Gomes as Watford stayed compact and organised in their own half. When the home side attacked, they were typically direct, using the physicality of their two strikers to unsettle Arsenal. Indeed, that’s why the game was so interesting in the first-half because it featured a tactical battle you don’t see much anymore.

Watford play with an old-fashioned strike-pairing, with Odion Ighalo playing just off Troy Deeney. At heart, they’re both quite similar players, both comfortable dropping off and linking up play as they are running through on goal, though it was the captain, Deeney, who generally played deeper. Here, he played a number of clever passes which typically you’d expect an orthodox number 10 to make, not a number 9, such is the prevalence of the lone-striker system these days. However, by deploying two up front, it meant Watford lost a presence in midfield and Deeney had to fill that hole.

His passes were often played with the outside of the boot which perhaps could have caught Arsenal out were it not for the dry grass. It seems a trivial point to make but Aaron Ramsey mentioned after the game that it was tricky to get enough zip on the ball and indeed, it was noticeable the ball did hold up a bit, particularly when Watford played it high and over the Arsenal backline.

The Gunners tried the same too a few times, with Alexis looking for balls over the top to Walcott early on. Laurent Koscielny generally had the recovery speed to cut the passes out though on other instances, he attempted a few risky interceptions that could have been punished. The one-on-one chance to Ighalo springs to mind, where also the ball seemed to hold up under his feet bearing through on goal, as Koscielny tried to meet the flight of the ball first ahead of the striker (and another when Anya attempted a cut-back). Per Mertesacker, though, was more troubled and looked particularly uncomfortable when he was asked to push out and attack the ball. 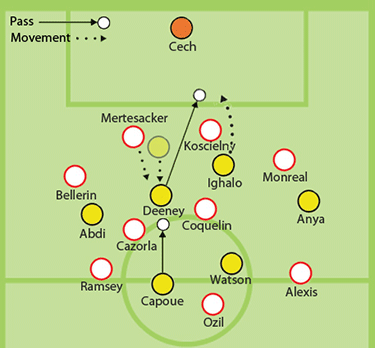 Indeed, this was what made the battle in the first-half so intriguing: Against two strikers, it means the two centre-backs might be asked to cover and attack the ball simultaneously, thus disorientating the backline.

Usually, against a lone-striker system, centre-backs have the luxury of a holding midfielder marking the number 10 thus allowing one of them to stay back and sweep. Francis Coquelin does this job especially well, often getting tight to the no.10 high up the pitch and winning the ball back quickly (indeed, Coquelin has the highest ball recoveries in the final third for the league).

Here, he was more typically asked to mop up the loose balls that dropped in between the midfield and defence. He did that very well and, as a result of that extra space, showed more progression with his passing when he got the ball. He’s still a bit inhibited by that extra responsibility, but with games, he will surely become a more rounded player. Certainly, he’s somebody that seems to understand the nuances of his team-mates and is quick to play quick one-twos to keep the attack flowing, but perhaps sometimes is too submissive to his team-mates, often eschewing the expansive pass for a simple, short pass to somebody right by him. 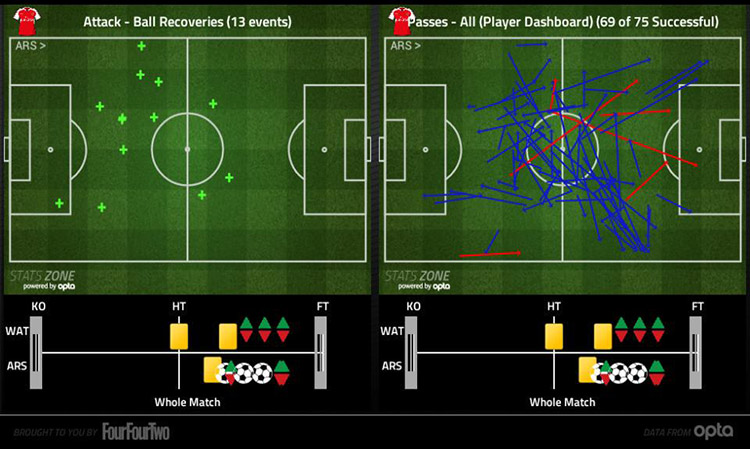 Later though, Watford tired and Arsenal grew more dominant. The Gunners cut through them twice more, the 2nd goal featuring a passage of play of about three minutes where Arsenal moved the ball from left to right and back again before Ozil cut the ball back for Giroud. This is the difference from the first-half that Aaron Ramsey alluded to after the game saying: “We stuck to the game plan, and our quality showed in the second half. The pitch was quite dry, they didn’t water it and that took the zip out of it. We had to get the ball, switch sides, and combine in the box which we did in the second half well.”

Ramsey himself got the final goal, a quite scruffy finish in the end, but it came after an incisive run from Hector Bellerin at right-back. Indeed, the attack from the right side was a key feature of Arsenal’s play in the match as 42% of attacks came from that side, and 32% from the left. That only 25% came from the centre highlights how Watford tried to block the centre but also, the way Arsenal moved the ball from side-to-side, opening up the pitch.

Ramsey was very involved prior to his goal though unlucky in his final actions. He seems like a man desperate to play in the middle – and he got his chance for a small period in this match which might indicate how Arsenal could set out against Bayern Munich. He has dovetailed well with Bellerin, in a similar way to how Monreal understands Alexis’ game on the other side, while his powerful running is more effective at the moment than Oxlade-Chamberlain’s.

Indeed, that’s the thing about systems; it’s about how you organise the team to take full advantage of the individual. Alex Oxlade-Chamberlain may be more dynamic but he’s still got his idiosyncrasies which seem to massively govern his game. In that, he loves to travel with the ball long distances so that he plays more like an old-fashioned right midfielder in a 4-4-2 than a modern winger-forward in a 4-3-3. Watching how Bayern use Douglas Costa or Arjen Robben tomorrow can teach him (and Wenger) how his game should develop. On the plus side, though, he’s improving his give-and-go play – which Ramsey does so well in that role anyway – whereby he can use his power to surge beyond the full-back and get into the box.

Alexis, though, is the star-man – the striker in Arsenal’s system despite playing from the flank. Arsene Wenger bemoans the lack of quality strikers from Europe in the modern game, and certainly, in another time and perhaps in another team, Alexis would be a no.9. As Wenger says, the emphasis on technical quality means the whole team is basically an extension of the midfield.

In Europe in the last 5-10 years, that meant the striker had to shoulder a lot of burden thus the no.9 had to be an all-rounder, capable of bringing others into play as much as scoring. Walcott bucks that trend a bit because he doesn’t have the close control or balance that the vaguely similar strikers Sergio Aguero or Pierre-Emerick Aubameyang have while Alexis has everything.

The use of Alexis wide, though, isn’t atypical in Europe: it’s where the mavericks tend to play (or those players that lack one thing i.e work-rate and have more of the other i.e pace or vice-versa) – players who simultaneously play within and outside the system. In this position, they can be free of the attentions of centre-backs to really cause havoc. Some of them are great goalscorers but aren’t strikers.

Alexis is one of them but can just as easily be the other.