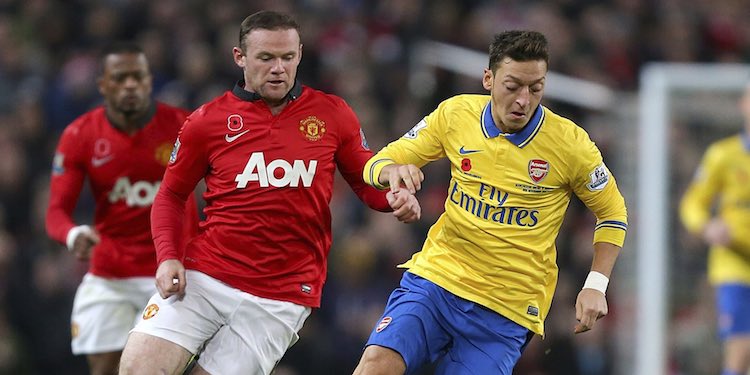 Manchester City’s win over Pointless United yesterday means that we can’t go top of the league today, but a win against United would move us level on points with them and two behind Pellegrini’s team.

After the week we’ve had, it’s hard to know exactly how the manager will set his team up for this. He will know how restorative a win would be, how that would change the mood and restore some faith and confidence. At the same time though, he must also know how badly losing would go down and all the positives a win would bring are mirrored by the negatives of defeat.

It remains to be seen if that will have an influence on his approach to the game, but in terms of selection there’s likely to be a very familiar team and one that might be judged cautious were it not for the fact we simply don’t have much choice. Ideally, with everyone fit, you could probably make a good case for the involvement of players like Jack Wilshere and Danny Welbeck to freshen things up, but their injuries mean the options available to us are pretty limited.

Petr Cech will obviously come back in goal ahead of David Ospina, while the central defensive partnership of Mertesacker and Gabriel is the clear choice in the absence of the hamstrung Laurent Koscielny. No Flamini or Arteta in midfield means little anyway in terms of the starting XI, while Theo Walcott will likely get the nod over Giroud up front.

That aside, those in reserve are safety net players rather than ones who can really compete with those ahead of them. Joel Campbell, for example, is not somebody you could use other than in an emergency, especially in a game like this. So, my suspicion is we’ll see Ramsey on the right, and the tried and tested: Cech, Bellerin, Mertesacker, Gabriel, Monreal, Coquelin, Cazorla, Ramsey, Ozil, Alexis, Walcott.

And with not much on the bench aside from Giroud who can really change a game – unless we see some kind of youngster included as a wild card – the onus is on those starting the game to have the required impact. No doubt United will have looked at what happened in midweek, looked at what happened against West Ham, and looked at the way teams who have got results at the Emirates have set up.

They’ve obviously got a clutch of dangerous players, but what seems to hurt Arsenal most is space – when our moves break down and the opposition come forward, they seem to use the room that leaves them in an annoyingly effective way. It means first and foremost we need to find the kind of defensive stability that saw us keep three clean sheets in a row before the Chelsea game. With Cech and Mertesacker back in the side you would hope that the assurance and leadership they bring can help in that regard.

Coquelin’s patrolling in front the back four, and stopping supply to the likes of Rooney and Martial will be important also, and it almost goes without saying that we have to avoid the individual errors which punctuated the defeats we’ve experienced this season. I say almost, because clearly it does need to said – not that anyone should listen to me, but you know what I mean.

At the top end of the pitch we do have the potential for goals. Alexis is scoring again, Walcott seems to be on one of those streaks he enjoys, and it was interesting to see him turn provider for the Chilean against Olympiacos on Tuesday. It’s also a game in which I’d really, really like to see the best of Mesut Ozil.

As much as the energy of Alexis is inspirational, it feels as if we could use something a bit more subtle and understated to help us win games like this. We’ve read the stats, we know it’s one win in thirteen in the Premier League, so we’re overdue one. You might also argue that so too is Ozil, a player I love, and against top opposition it would be fantastic to see him have a real impact on the game. If he does, we’ll have much a much better chance of taking three points.

It’s one of those where a win would be amazing, a loss unthinkable. It does feel as if we really need this though, and maybe that, and the desire to react to the Champions League, will give us that little bit of edge we need.

As always we’ll have live blog coverage of the game for you. Check back later for a post with all the details, or simply bookmark our default live blog page and the updates will start automatically. Your host today will be @arseblog_tom.

I’m over for the game, so look forward to seeing some of you in the usual spot for a pint or two. Fingers crossed we can get ourselves going at home, we really do need a good result there, and today would be just the day for it.