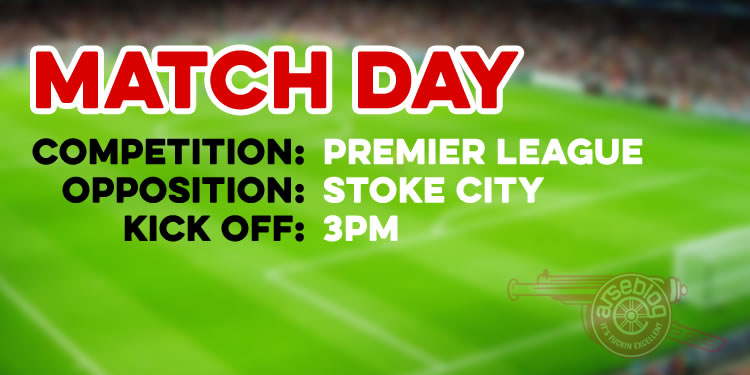 Football is back, and we have our first 3pm Saturday kick-off of the season as we face Stoke at the Emirates.

After two disappointing games at home against West Ham and Liverpool, there’s a bit of pressure on today to perform and, of course, score goals. They’ve been in short supply in our last few games, and today would be a good day to find our shooting boots.

Correction: it’s not our shooting boots that are the problem. We’ve had plenty of shots, it’s just that our finishing has been a bit skew-whiff, so today is about being much more efficient with the chances that we make.

The manager has been talking up the qualities of the strikers he has, which is not at all unexpected. The transfer window is closed, there’s not much that looking wistfully back on that period will do bar drive us mad, and it’s now down to the players we have to perform. Like most of you I would have liked to see us boost our ranks, but I also believe that the players we have are capable of a lot more than we’ve seen from them so far this campaign.

It’s clear that Arsene Wenger does too, as he’s been talking about their potential contributions this season, saying:

We will have to spread the goals through the squad. I think Giroud, Walcott and Alexis can get around 20 goals without any problem. Sometimes you have to trust your players and play them.

I’m assuming he means 20 goals each, rather than collectively. Last season Giroud got 19 with a three month lay-off, Alexis scored 25, while Walcott got 7 despite the fact he was injured a lot and then out of favour right until the final couple of games. Is it unreasonable to expect the same again from the first two and for Walcott to improve?

The only thing I’d say is I can’t remember the last season where three Arsenal players scored 20+ goals. Historians/stattos probably can, but it doesn’t strike me as something that happens that often. Even with Henry, Pires, Bergkamp, Wiltord etc.

Maybe though, having an Henry means the team is focused and built around his finishing ability, and we don’t have an Henry (mostly because they’re very, very difficult to find). Perhaps Alexis with 25 debut season goals to Henry’s 26 comes closest, but he’s not going to be the focal point of the attack unless the manager decides to really give him a go up front – and even then it’ll take some time.

Wenger is also looking for more goals from those just behind:

I would rather have Ramsey 15, Ozil 15, Cazorla 10. Otherwise, if you have only one player who scores, when he is injured you don’t know who will score.

Again, if it works out like that it’s great, but those are pretty serious targets for those three players. Ramsey has scored 26 goals in the last two seasons, so comes closest, but Ozil and Cazorla have to make huge improvements on their goalscoring contributions (and yes, I know Santi got 7 or 8 last season, but they were mostly from the penalty spot. It’d be good to see him score more from open play).

In some ways the Interlull might just have been timely. There was a need to take stock, to kind of start again, and the little gap and the games will hopefully have helped with match fitness and all the rest. The question is ‘How does he spark the team into life?’

Does he, as has been mooted here and elsewhere this week, try Alexis up front and give him a run of games to get into the role? On yesterday’s Arsecast, Amy suggested that using two up front in a slightly different formation might be the thing, but it does feel as if we need something to make us a little less predictable. Giroud up front, Alexis left, and Anyone right is pretty much what we do, and what they think we’ll do, so it makes it easier for them to deal with it.

My suspicion is that against a team like Stoke who, despite adding some good technical players to their squad, he’ll plump for the most physical option up front and pick Giroud. Whether he can add that bit of something different elsewhere, we’ll have to wait and see, but after a difficult week we’ll have to hope that the Frenchman can respond to a show of faith (and of course he is our only goal scorer this season thus far).

An early goal would be good. I’m sure Stoke will have looked at what West Ham did and set out to frustrate us, to weather the early storm, and then try and hit us on the break. I know I linked to this before but it’s an interesting read about how teams are setting up away from home. There’s also the edginess of the crowd, that if it gets a bit nervy it might add to the pressure the team will feel about today’s game.

Hopefully it’s a game in which we can find our finishing range again. We’ve got a good record against Stoke at home, and there are a few lads out there today who might feel like they’ve got something to prove. Score early, take control, and I think we’ll win this. Anything else doesn’t bear thinking about really.

Remember, if you can’t see the game due to work or other commitments, you can follow it on our live blog. It gives you up to the second live text commentary on your computer, tablet or mobile device. Simply check back here for a post with all the details or you can bookmark our default live blog page and updates will begin automatically.

Catch you later for the game. Come on you reds.

Wenger has a good selection headache + Alexis up top