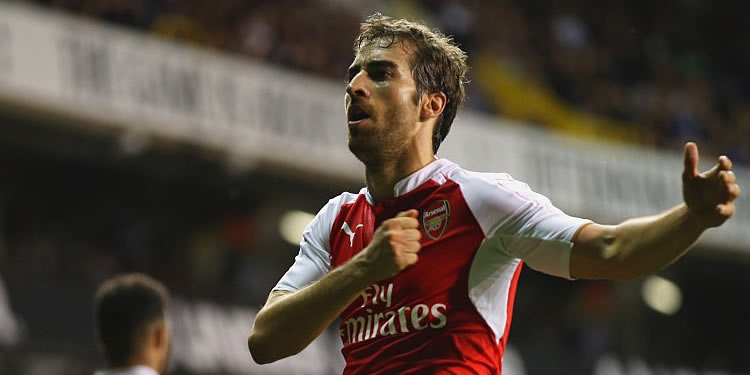 One of the worst things about football these days is Know-it-all-ism. That regardless of what occurs, there’s always some bloke who’ll say ‘I knew that would happen’, or ‘I told you that team couldn’t get a result’, or ‘I’ve always said that player is useless and look at how bad he was today.’

That Know-it-all-ism is generally based on massive amounts of convenient hindsight makes it even more irritating. So it’s lovely when football surprises us, and gives us something that we didn’t expect. It’s why giant-killings in cup competitions are so great. Nobody expects it, and it shakes us, temporarily at least, out of our comfort zone in which our own blinding insight and expertise allows us to predict everything with 100% accuracy (even if some of those predictions come after the fact and with a side of ‘toldyouso’).

If you’d looked at Arsenal’s starting XI and tried to pick the player who might score two goals at White Hart Lane, I’m almost positive nobody would have chosen Mathieu Flamini as that man. Olivier Giroud, centre-forward, if he got some service he might do it. After talking about goals in midweek and his need to do more, perhaps Alex Oxlade-Chamberlain would be the one to blast his season into life. Aaron Ramsey might get off the mark for the season or, at a stretch, Joel Campbell might finally show his stuff and get his Arsenal goalscoring career off the mark.

But not Flamini. He hadn’t played yet this season, becoming something of an outsider and very short of first team action. There was nothing to his goalscoring record that suggested this was in his locker. He did get two for us in the 2013-14 season … but the goals were 4 months apart – one at Cardiff and one at home against Man City. I’ve gone back through his career and the closest he ever came was scoring in consecutive matches in 2007, away to Reading and then away at Aston Villa. He’s never scored two in one game before as far as I can see.

His first came after some good midfield play provided Oxlade-Chamberlain with a sight of goal. He hit a low rasper, the keeper parried it out in front of him but there, like the best goal-poacher you’ll ever see, was Flamini following up to hit it into the roof of the net with his left foot. He thumped his chest, White Hart Lane was silenced but for the cheers of the travelling fans and Arsene Wenger exclaiming ‘OMG WTF!’ and Steve Bould going ‘LOL’.

After they had got themselves a rather lucky equaliser, the otherwise solid Calum Chambers deflecting a tiddler of a cross past David Ospina having been left exposed at the back post, it felt like the momentum was with them. Ospina had to make a cracking save from Eriksen (I think), Kane had the ball in the net but was offside, and the man whose mouth is always open was denied by a brilliant clearance off the line from Kieran Gibbs – who ought to be knighted for services to the world so we don’t have to endure endless replays of Kane’s scissor kick goal making him the best player ever again. As it is, Mathieu Flamini has scored more goals at White Hart Lane than him so far this season.

Arsenal brought on Alexis to try and add some zip to our play and it seemed to work. We got back into it, the Chilean having a decent chance to open his account for the season but once more his finish was worryingly tame. Then, it happened. A Sp*rs boot sent the ball looping up into the air towards his own penalty area. There didn’t look to be any real danger, but then the home players suffered from a touch of Know-it-all-ism themselves.

If there was a player making an effort it was only Flamini. He wasn’t going to do anything with it but clobber it out of the ground. Except what he did was time his run perfectly, keep his eye on the ball, and pull off one of the most difficult finishes in football, volleying a dropping ball past the keeper and into the bottom corner. If the best strikers in the world had done that they’d be lauded for their talent and technique. So I hereby laud Flamini for his talent and technique and provide an extra slap on the back for doing it at White Hart Lane and making that lot so unhappy.

They couldn’t find a way back into it, a team I’d been worried might not be able to respond to two defeats in a week suddenly made everything feel a bit better, and the 4th round draw sees us play Sheffield Wednesday away, so all in all, a good night. Afterwards, Flamini said he felt he had to show people he wasn’t done yet:

I’m happy, happy for the team, and obviously personally very happy. I’ve heard many things, in the press, people talking about me, but I proved them wrong. I’m still here. I have no problem with anyone at the club, I’m happy here. I had a point to prove because I haven’t played for a while, today was my day but overall I’m happy for the team.

On Sky Thierry Henry said, “He has shown that he can still play for Arsenal”, and I think there’s just something nice about what went down. There’s a cynicism to everything these days and I understand completely that people wanted the club to strengthen in midfield this summer. As with the striking situation, the lack of transfer activity has led to overly-extreme opinion of the players we already have.

I think Flamini has taken a bit of unfair stick. He’s not the best player ever, nobody would argue that, but last night he showed that he is still capable of doing a job for the team and for the squad over the course of the season. On his first appearance since May 17th (he came on in the 89th minute against Man Utd), and his first start since February (FA Cup v Boro), he reminded us all that just because you want something shiny and new doesn’t mean what you have already is worthless.

I would very much like a brand new Audi (open for sponsorship/contra deals here any Audi dealers that are reading, cheers!), but my 2007 Nissan will still get me where I want to go. Flamini isn’t the monster-truck we wanted for midfield this summer, he’s more a Peugeot in its autumn years with some exhaust issues, but that was enough to take us out of enemy territory with a win last night, and for that we should be grateful.

Along with the fact that when the unexpected happens in football, and when it goes in your favour, it helps us remember that there are still things will transcend the relentlessness of the day to day discussion and debate.

We’ll have news throughout the day on Arseblog News, and on tomorrow’s Arsecast we’ll look at some of the other elements of that game at White Hart Lane, the build-up to Saturday’s game against Leicester and lots more. Tim Stillman will be here later with his column, and if you’re interested in coming along to the Arsecast Extra LIVE (LIIIIIIIIIIVE), then you’ll find details here and a link to purchase tickets. Get ’em before they’re all gone!

In the meantime, have a good one.

Wenger denies contract story, so where did it come from?

Arsenal 0-2 Barcelona: Doing ok, then we make a Messi of it