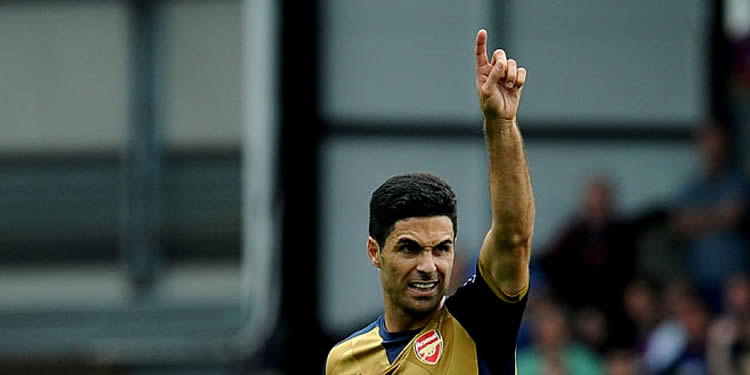 So there’s the Interlull done. No more international fixtures … until next month. And then, in the middle of November, a round of friendlies. That’ll be fun.

Last night saw Oxlade-Chamberlain play 90 minutes for England; Santi Cazorla do 69 for Spain; while Joel Campbell got an assist for Costa Rica as they beat Uruguay 1-0 in a friendly. I think that was the extent of the Arsenal involvement last night and everyone’s returning home without injury as far as we know.

The chaps will fritter back today, and the manager then has a couple of days to get them sorted, ready and able for Stoke this Saturday. The prospect of a home game against this kind of opposition, with all due respect to them, shouldn’t be such a worry, but our recent goal drought at the Emirates is such that it’s hard not to feel like we’ve got something more to overcome than just the opposition.

The international break will have given him plenty of time to think about what to do. I think the choices he has are relatively simple: Firstly, he can stick with a formation and formula that has worked often in the past and hope that the players spark into life. Whatever concerns we might have about the team, the fact we have scored so irregularly at home in the fixtures this season and at the end of last is certainly a rarity.

Or he can try something different in terms of personnel, going back to what I mentioned yesterday about Alexis up front, for example. It would allow us to play with pace on one flank, creativity on the other. It means Ramsey can move back into the centre of midfield where the manager seems to want to play him, and it might add a measure of unpredictability to our play.

Whatever he decides, with the pressure on to perform and score – and win – at home, and games coming up against Chelsea, Sp*rs and Man Utd over the next few weeks, there’s no doubt we need to spark ourselves into life. A Stoke team whose record at our place down the years has been pretty poor is a reasonable chance to do that. More on that game as the week progresses.

I was going to touch on Olivier Giroud and the seemingly non-stop coverage of his performance for France against Serbia. Maybe there are concerns that this will dent his confidence, but all that happened is he missed a couple of chances in a friendly. If that does him any kind of real harm then I’d be quite worried.

I suspect it’s more a symptom of a quiet Interlull and the dearth of anything else to talk about than it being a story for the ages. I’m sure when he comes off the bench to score the 4th against Stoke at the weekend the whole thing will disappear into the ether like it should.

Meanwhile, Mikel Arteta has spoken about how hard he found it to be out injured for such a long period last season. The calf injury that eventually required surgery kept him out from November onward, and he’s since slipped down the pecking order after the emergence of Francis Coquelin. Speaking about that time out, he said:

For me it is the frustration. When the players go outside for a training session, you feel wasted. They come back, they travel, they have different times to you and you don’t spend much time with them. Personally I don’t feel productive.

I’m here because I want to play games, make this team more successful and be a part of it. When I’m not able to do that I still have to contribute, be positive, be good around the other players, give advice and try to help my team-mates. But it is not the same.

But I worked really hard and tried to stay positive, do my best and here I am again now, earning my place in the squad and ready to help the team.

I think it speaks a lot to his character that the new deal that was on offer was only signed when he was fit again, and when he felt he could contribute. The easiest thing in the world would have been to sign up again and if the injury flared up at least he had that assurance of a further year. There must also be some real faith and trust in him from the manager because the captain provides him with a safety net in midfield.

At 33 you’re not looking at someone for the future, but I think the complete dismissal of him as a player and a member of this squad has been harsh. Many people wanted us to sign a new midfielder, but the outright rejection of Arteta as someone who can contribute to add weight to that opinion is a touch disrespectful.

He’s 33, not 133, and although he’s not the same kind of all-action, sliding about, crunching into tackles kind of player as Coquelin, I think he still has the quality to make a contribution. Not three games a week – and I guess that’s where the real worry stems from if something does happen to Coquelin in the middle of a busy period – but he can help share the burden in there.

The other thing I’d say is that since his arrival in 2011, a last-minute deadline day purchase that Dick Law tried to banjax by shafting him on terms at the 11th hour despite how desperate we were for a midfield, Arteta has been a hugely important part of this squad. Along with Mertesacker he helped add stability and experience, he did a job that was unfamiliar to him at first and did it well, and he’s played a big part in helping the curve move in an upward trajectory from those dismal days which saw us lose 8-2 at Old Trafford and when it felt like end of days territory.

Maybe the legs aren’t what they used to be, but I don’t think they’re gone yet, and I hope that in time he gets the respect he deserves for the role he’s played for this club.