As a contest – and perhaps as a spectacle even – Arsenal’s 1-0 win over Newcastle United ended when Aleksandar Mitrovic was sent-off on 16 minutes. It was an ugly challenge; an accident maybe, but lazy and entirely in keeping with the negligent tactics deployed by Newcastle on the day. To their credit, Arsenal rose above it and tried to stay patient in front of such wanton aggression. Though that was only half of the story because The Gunners also laboured and failed to find the conviction that has been the story of their season so far.

It’s always difficult against ten-men. The accepted wisdom, when a red card happens so early, is that you remain patient and wait for the invariable gaps that open up (and later on, if you still can’t find the breakthrough, throw another striker on). That’s typically harder than it sounds because the other side of it is that “it gives a reason for the opposition to be alert, to be concentrating, to get behind the ball, to be well organised and that makes it even harder,” says Roberto Martinez.

That’s certainly true of this game because Arsene Wenger was expecting a different strategy from Newcastle when 11 v 11. Theo Walcott was given his chance up front to showcase his extreme pace against a defence he thought would push up and try and take the ascendancy in their home stadium. The red card put paid to that idea because for the rest of the game, Walcott was made to feed on scraps, forced to sniff out  improbable goal-scoring opportunities. That he nearly did, when he raced on to a rebound following a shot from Alexis Sanchez, sprinting from the edge of the box, highlights some of his potential in that role, Because realistically, no other Arsenal player would have sensed such an opportunity and, indeed, no other player would have reached it.

The striker situation is a curious one at Arsenal. Theo Walcott’s highly uneven skill-set, skewed towards the explosive means that there are only a few certain type of games that suit him. As such, it’s hard to look past him as a glorified Plan B. However, with squads more malleable these days, having versatile players is probably more important than the accepted notion of having two players in each position. Because it allows coaches to work with a core group of players so that they can foster the kind of understanding that a large squad doesn’t allow, and at the same time, incorporate a few talented youngsters in.

Indeed, it was interesting to watch Walcott, in the 10 minutes leading up to his substitution, desperately trying to get into positions to affect the game as he sensed his time was coming to an end. Intriguingly, it was when Arsenal began to find their balance, interchanging with more intelligence. At first he tried to drop-off the centre-backs, having played fruitlessly on their shoulder for much of the game, but was unable to get on the ball. He then decided it was best to attempt something that he was more accustomed to, by taking up wider positions and switching with Alex Oxlade-Chamberlain and Alexis Sanchez. Immediately, he began to breathe more easily, attempting a couple of his trademark arching runs and twice, around the 62 minute mark, he nearly got in on goal.

It’s hard to deny that the wide forward role is probably Walcott’s best position but that means Wenger has to try and find a balance between having too many strikers and enough midfielders. He usually sticks to the latter though looking back at the last season, during mid-February and March, Arsenal’s most fluent performances probably came when Welbeck was drafted into the side on the flanks. His presence gave Arsenal more of an outlet, adding sense to the interchangeability (because three strikers across the frontline is more mutable than two-and-a-half where one typically plays deeper), while it allowed Alexis to balance his game better. Right now, Arsenal’s line-up is overly skewed towards the midfield and that narrows the play a bit too much.

For me, Arsenal’s improvement in the second-half owed to the team realising not only the importance of width, but maintaining shape; when one player vacates his position, another one takes his place. Indeed, when Wenger and Aaron Ramsey talk about at the end of the game, remaining patient, I hope it’s not just about the need to wait for the opening and hurry your game, but about keeping your positional discipline. Total Football is clear on what is the most important factor: width. As Johan Cruyff says, when you attack, the pitch gets smaller length-ways, but the one thing that stays constant is the width of the pitch. Therefore if you open up the pitch well, then the ball will always keep moving. 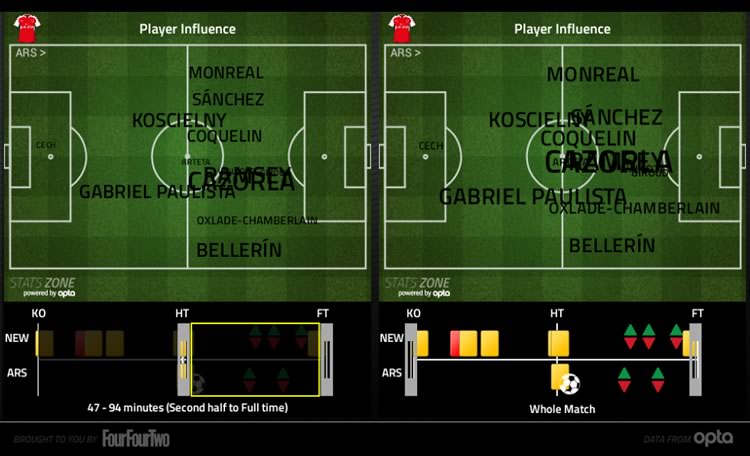 Arsenal’s improvement in positional play can be displayed by their average positions diagram from both halves. In the first-half, The Gunners were too attracted to the ball, too anxious to make something happen, especially Alex Oxlade-Chamberlain. In the second-half, the spacing is much improved, more even across the pitch. That’s highlighted by the goal as the move starts on the right, with Aaron Ramsey declining the chance to free Oxlade-Chamberlain behind. Instead, Arsenal work the ball to the left-flank and then back again, resulting in two shots: first from Ramsey and then, from the subsequent rebound, Coloccini deflecting Oxlade-Chamberlain’s shot into his own net.

That the breakthrough came from Oxlade-Chamberlain feels particularly appropriate because any time he plays, he’s billed as the game-changer. Yet, like the Arsenal team, it feels like we’re still waiting for his break-out moment. That though, is not entirely a bad thing. It just suggests Oxlade-Chamberlain has the maturity; he now needs to add the game intelligence to take him onto the next level.

Certainly, it’s a salient point because if we’re talking about positional indiscipline against Newcastle then Alex Oxlade-Chamberlain should be the solution. Because it’s his role on the right to stretch play, to keep the full-back occupied, but just as he did against West Ham and in this game, he was too drawn to the centre, looking to pick up possession, less from an inside right position, and more as a traditional right-midfielder. That’s mainly his mannerism; his signature move is a sort-of rugby league style dribble, starting deep and attacking the full-back with a heady mixture of power and pace. In a way, he reminds me a bit of Gareth Bale; a player who learned to adapt his game to play higher up the pitch than looking to engage in inefficient long-distance sprints.

In time, hopefully the Ox will become that player, adding behind-the-defence runs to his game – right now though, he still feels a bit of an interloper in the system, somebody who you expect to create two or three exciting moments in the game, but not quite fully integrated despite possessing a surprisingly variable skill-set.

While Alexis on the other side feels a little bit of the same, he’s a constant outlet, somebody who Ozil can feed off because he’s always occupying the opposition full-back. I still think Oxlade-Chamberlain is still affected too much by the positioning of his own-full back rather than working in tandem with him – as Alexis does with Monreal and as they did excellently in this game. It’s probably telling though that both players on the right flank are very inexperienced at the top level still.

I’d like to end though, with a quote from Per Mertesacker from last season when he mentions Arsenal’s fluidity. “We are so unpredictable in what we are doing,” he says, “that even for me at the back sometimes it looks a bit weird!” Sometimes we lose balance but sometimes it looks really good.”

I’d advise Wenger to preach some caution if he wants The Gunners to be a more cohesive outlet.