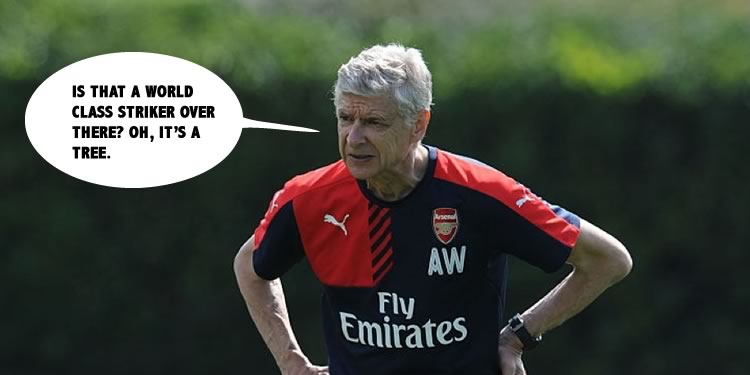 Morning, I had a lie-in until 9am, this is amazing. Who knew it was permitted to sleep this long into the day. I feel thoroughly decadent.

We’ll start this morning with the manager’s thoughts on new arrivals as expressed at his press conference yesterday. It’s all quite familiar, he wants to spend, he won’t spend unless he thinks it’s a player that will improve us, but above all he can’t really find anyone to spend the money on.

He bemoaned the lack of top class striking talent:

There’s a shortage of top class strikers in the world.

Which is hard to argue with, because it’s quite patently true. Then he came to the issue of the strikers that are around being at the top clubs already, clubs who have no reason to sell:

So, we have all this interest in Benzema, and we can afford to spend the £40-£50m to buy him, but if Real Madrid are adamant they won’t sell, what can you do? If you think back to August 2013, I don’t think there’s any way we’d have signed Mesut Ozil if they hadn’t spend £80m on Gareth Bale – even a club like Madrid has to operate within the bounds of some financial reality. They had to recoup some of the Bale money, simple as that.

And the same goes for Suarez, for Lewandowski, for Messi, for Ronaldo, the top players are at the top clubs, and unless those clubs are willing to sell – and the player is willing to move (let’s not forget that rather important part of it) – it’s nigh on impossible for a club with the stature of Arsenal to buy those players. We’re a good sized club, with a decent amount of money, but not one of Europe’s giants that can use that to lure and blast away any opposition to the deal with truckloads of cash (a point 7amkick off makes well here).

Now, does that mean there are no players that we can buy? Of course not. There are loads of them. We could hoover up a striker from many, many clubs if we wanted. We could use our relative financial muscle to do what the big boys do to everyone else. But is that what people want? All summer long in the comments on this site, on Twitter, on Facebook, the desire for a ‘World Class’ striker is the obvious common topic.

We could go and buy a striker today with relative ease, but it wouldn’t be a ‘World Class’ one. Yet we’re now at a point where the desire for new arrivals is such that the quality of the player becomes less important and the fact that he arrives at all is the key issue. The idea that at least we’d do something, or show that we’re trying to do something, is paramount.

Those people are going to be disappointed, as Wenger says:

I’m not against buying, but if it’s just to buy a player at the level of the players that you have to make people happy, I’m not ready for that. If it’s somebody who brings something that you don’t already have in the squad, then of course you want to do that.

This comes back to what I’ve spoken about a number of times this summer: the fact that our squad has improved considerably, and thus it becomes exponentially harder to improve it. When you lose Robin van Persie, and your squad options are Andrei Arshavin and Park Chu-Young then it’s relatively easy to augment that with signings like Olivier Giroud and Lukas Podolski.

When your back up to Giroud is a lanky French kid who cost nothing and who is a long way from being ready for first team football (if he ever will be), then it’s easy to spend £16m on Danny Welbeck to improve your squad. The challenge now is, of course, to do that again. There should always be a desire to make things better, to be as good as possible, but it’s no longer as simple, both in terms of price, availability and even identification of those players.

The desire for something new often results in playing down what you already have, and what we have is pretty damn good. Giroud is a fine striker – even if any praise of him always seems to need qualification. Sure, he’s not as good as some of the players we’ve had in the past, but if you’re using Thierry Henry or Dennis Bergkamp as a benchmark then you’re going to be disappointed a lot of the time.

Danny Welbeck – the jury is still out. He’s got most of the attributes you want in a central striker, but he’s yet to prove he can do it consistently. Alexis can play there, and it wasn’t long ago people were lauding Theo Walcott’s ability to do it in that role (something I’m not yet convinced of personally). Still, overall what we have is good, it’s not Baptista, it’s not Park, it’s a long way from that.

But as I said, you’re always looking to improve, and the task for us as a club is to find out how to do that. Do we persist with the Benzema chase, for example, and hope that spending close to £50m on a player who might give us 20% more goals that Giroud is enough to win the title and make us more competitive in Europe?

You look at how signing Bergkamp changed the perception of Arsenal as a club, a big signing can shift the way people think about you, and I believe Ozil and Alexis have done that to an extent. But with all due respect, Benzema – fine player that he is – is no Dennis Bergkamp.

One of the alternatives I mooted was the idea of using scouting/talent spotting, to identify a player with the potential to become the next big thing. Suarez at Ajax is perhaps a good example of this. He wasn’t a ‘World Class’ player when he joined Liverpool but became one there. Maybe that’s where a club like Arsenal can find a way to boost the squad.

You might have to wait 18 months for that player to settle in and develop, and there’s a risk he might not do that the way you’d like, but it seems like a more realistic way to have top talent in your team. But then we return to this desire NOW to have NOW a ‘World Class’ striker NOW, and for all the people happy we’d spent a mid-sized amount of money on someone/anyone, there’d still be complaints that we’re not buying from the top shelf, and, probably rightly, worries that what we have bought doesn’t improve us in the short-term.

I don’t take silence as evidence that we’re not trying. I think the signing of Cech suggests that if the player is there, we’ll do it, and we’re prepared ship out someone who was essentially our first choice keeper for 4-5 years despite Ospina’s 5 month cameo last season. I think the same is true of almost any position in the squad, in particular the striker.

I think Wenger would love another Henry – and if you remember there were those who wailed loudly at the time that we’d replaced an amazing striking talent like Anelka with a failed Juventus winger. As we know he was an instant success with 26 goals his first season.

I’m sure Wenger would love another van Persie, but lost in the mix there is the fact he joined in 2004, and was slowly developed into a top striker by Wenger after years and years of injury and inconsistent performances kept him out of the team.

I think he’d love a striker who could be the difference in big games, who could provide that bit of magic to rescue a point or turn a draw into three  – especially now we can really afford to pay almost whatever it takes – but players of that talent are like hen’s teeth. We’ve been lucky enough to have a few down the years: Wright, Henry, Bergkamp, van Persie, but finding the next one is no easy task, and that’s why it feels like such a struggle.

Maybe there’s another answer too – if you can’t find the striker you want, could a purchase that improves us elsewhere could provide the kind of quality injection we need? Something to ponder.

Right then, if you haven’t had a chance to listen to this week’s Arsecast, I talk Benzema with Philippe Auclair, and whether or not we could live with our current forward line if we make a purchase elsewhere – check it out here.

In the meantime, have a good Saturday.