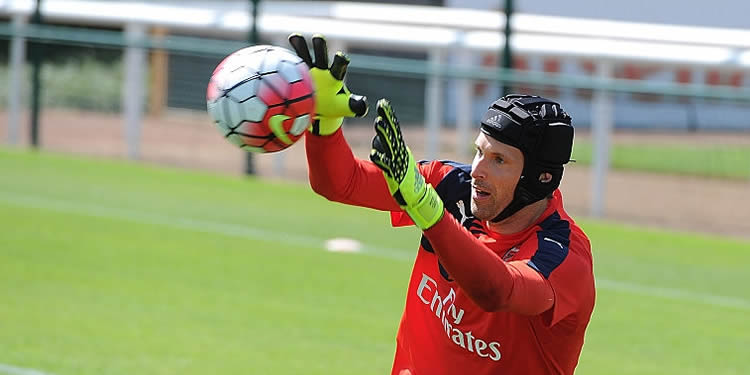 A very quick Saturday round-up for you as I feel as if I’m in a lot of pain this morning. I feel that way after a strenuous game of football last night. However, I’m sure that the older I get the more I’ll get used to my limbs, torso and organs feeling completely banjaxed – that’s how it works, right?

The milking of the arrival of Petr Cech continues with pictures of his first training session. This follows previous features like:

Oh what larks, eh Pip? Anyway, he’s in the group now, training away like billyo, catching the ball, throwing it, booting it over the halfway line and that, and Arsene Wenger says his arrival will improve the whole squad:

He has huge experience and the fact that he has won more big trophies can strengthen the belief of the team. That can help them to develop and that’s what I expect from him.

As I’ve pointed out before, it’s quite interesting that the signings we’re making now are players who have won things at their previous clubs. Of course that’s down to the higher profile of those clubs and the money we now have to spend, but since August 2013 we’ve signed a player from Real Madrid, Barcelona, Manchester United, and Chelsea.

That’s quite the change. Normally we’re the ones letting players go to places like that (before one of them drops off a cliff and ends up at Fenerbache or something where he can skunk the place out like a big skunky skunk and the little boy inside him will hopefully burst out of his stomach like he’s John Hurt in Alien saying ‘Fuck this, I’m not letting you speak for me anymore!”).

It’s also interesting that the manager is open to the idea of what you might call marginal improvement. I don’t think the goalkeeping position was a significant problem for us last season, something AW acknowledges, saying:

It was a very, very tough decision to buy Cech because I have two great goalkeepers. I think Cech can make them better as well. You always want to improve the experience level of your squad and I thought he could help us gain something on that front.

If that applies to the rest of the squad – which I’m sure it must – it means that if the right player is available and can improve us, then we’ll be open to doing the business. As much as the manager might like a particular player, if he can find one that will make us better then he’s prepared to do the deal, and that’s encouraging.

Meanwhile, David Ospina says he wants to stay and fight for his place despite the arrival of Cech. He acknowledged the interest of Everton but said:

There are some possibilities of playing on other teams, and I always look and analyse things, but my mind is at Arsenal. I’m happy in London and my family is too, so we hope, at least, to respect the contract with the club.

And like Szczesny before him, he says he’s looking to take advantage of Cech’s experience:

Next season we’ll work next to an excellent keeper in Cech, who is recognised and admired, and I’d be honoured to share with him, he’s a player with great experience. You learn every day, and in this position we stop learning when we retire.

Can’t argue with the sentiments at all, but I still think having three goalkeepers of that stature is just not possible. One of them is going to have to go, on loan probably, but I guess the manager has until the end of August to make a decision there – if he hasn’t already made his mind up which one of them he wants to let go.

Beyond that nothing happening bar the usual piffle regarding transfers. Things in quotes that aren’t actually quotes, made up bits, fiction, spoofery and general bollocks. And frankly nobody’s got time for that this morning.

With that I’ll take my leave, my aching carcass needs breakfast, and a long walk with a football playing dog will surely provide the cure I need.