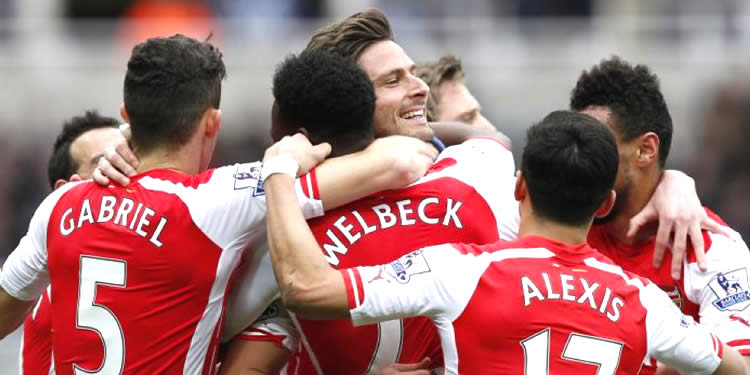 Morning all, welcome to Friday. The Community Shield is only 23 days away. And when you’re as old as I am 23 days flies by. Sometimes the summer can really drag, especially in a non-tournament year, but this one seems to have gone by in a flash (bearing in mind that there, of course, 23 days still to go to that clash with Chelsea and 30 until our first Premier League game).

However, with pre-season well underway, and a trip to Singapore imminent, stuff will happen which makes the time pass more quickly and before you know it Petr Cech will make a great save from Costa, then start a lightning fast break which sees Bellerin and Walcott combine down the right, and Aaron Ramsey nutmeg John Terry before laying it off to Giroud who scores past Courtois to win the game in the 87th minute.

Sure, it’s not new keeper throws it out to new exciting winger who slips it inside to devilishly handsome and excellent new attacking midfelder who sets-up cracking new striker to score the winner, but I don’t think that was ever going to be the case this season.

In his latest column Tim Stillman looks at the ‘what if’ scenario where we don’t buy any more players this summer, and wonders if the improvements we need to make can come from within. That in itself is a talking point, and one I’m sure you’ll discuss throughout the day on the Arses, but when you look at the squad it looks the most complete we’ve had in a long-time.

In previous summers there have been very obvious gaps. Sometimes they were filled, sometimes not, but if you look at the options now it’s hard to spot where we’re short:

Some players obviously fill various roles due to their versatility, while some are on the fringes because of quality and numbers, so it’s difficult to make the case that we’re short of options. It’s not like last summer when the need for another centre-half was blindingly obvious, and the lack of that player had a considerable effect on the team. It meant Koscielny had to play with, and exacerbate, an injury. It meant that when Mertesacker’s form dipped we had no choice but to play him rather than give him the little break his body (and mind) needed.

Of course having sufficient bodies for all the positions, and having the right depth of squad, doesn’t mean you can’t still improve. I agree with Tim in that the signing of Cech was one made because the circumstances were right. He wanted out of Chelsea, to stay in London, and to play for a club that would be challenging for the title and in Europe. In terms of choice, and to tick all those boxes, he only had one.

The opportunity was there for the manager to bring in a player who he feels will make his team better. The consequence of that purchase, however, has yet to be fully realised. I don’t think there’s any way we can keep Cech, Szczesny and Ospina. Somebody’s got to go. At the moment it looks like the Colombian will be the man to make way, although he says he’s ready to fight for his place in spite of interest from Everton and Fenerbache.

I suspect some of that is posturing, because he must know that when a club spends £11m on a goalkeeper they not doing so for that player to provide cover. Either way, I think Cech’s arrival will mean a departure, and the same applies to any other position. A midfield signing will spark a midfield departure, a forward arriving will mean one of the forward options leaves.

If I had to speculate on where we might be most open to making a signing, and it is pure speculation on my part, I’d say the central striker is the one that sticks out most for me. I’m convinced that Arsene Wenger wants to see Alex Oxlade-Chamberlain really develop over the next 12-18 months, so he might be reluctant to make a purchase that could hinder that. While a manager’s job is to assemble the best team he possibly can, there’s no rule that says it has to be done entirely via the transfer market. Developing a player you’ve already invested a lot in, in terms of time, money and coaching, is part of it too – and we know how much he enjoys seeing one of his young players make a significant step up.

But, when you look at our central striking options, there’s nobody really like that in that position. I like Danny Welbeck but I think he’s always going to be a squad player, rather than the main main. Theo Walcott’s performance in the cup final was fantastic but I don’t see him doing that against the best defences, while Olivier Giroud is obviously a favourite of the boss and a very good player, but he’s 29 in September and it’s hard to make a compelling case that his is going to be a significantly upward trajectory:

Now, I like Giroud, I think he scores some great goals and is a very decent option against certain opposition. He’s improved during his time here and some of the criticisms about him not scoring against the best teams were addressed last season with goals against some of them.

However, in terms of how we can improve the first team, I think this is the most obvious position. Keeper is done, we have a world class playmaker in Mesut Ozil, a sensational wide forward in Alexis, great options in midfield (and I do accept cover for Coquelin is an area we could also make ourselves better), but to get those 10-15 extra goals a season do we bring in another wide man (which goes to the Oxlade-Chamberlain point earlier), or a striker that’s just that bit more efficient? Because as much as I like him, Giroud’s figures should be better based on the amount of chances he gets.

The question is: who is that player? Who is the striker that can make that difference? I don’t know. Maybe the manager doesn’t either, but I suspect he’s got his eye out for him, and if that player becomes available (or known), then he’d have no problem going for him. On the other hand, if that players isn’t identified/available, then I think we’ll go into this season with what we have, hopeful that the additional goals will come from a fit Walcott and an Oxlade-Chamberlain that adds that extra dimension to his game.

Anyway, one to pore over today in the comments and what have you. We’ll have news throughout the day on Arseblog News, and more from me here tomorrow.