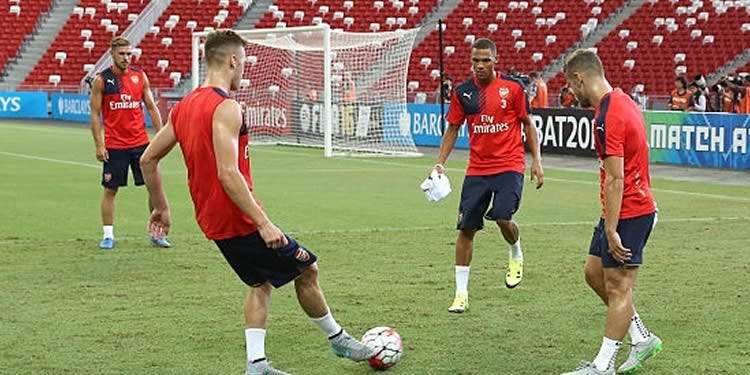 The first football of pre-season takes place today in Singapore as we face a Singapore Select XI in the Barclay’s Slush-Puppy Trophy.

Here are my predictions:

1 – There will be many substitutions.

2 – One young player will come on and do something nice and people will say ‘Ooooh, that young player did something nice. Could they be the solution to a problem we don’t really have?’, and there will be a clamour for them to be picked for the Community Shield against Chelsea and installed into the first team on a permanent basis when in reality the best they can hope for this season is a Capital One Cup game and possibly a Championship loan around Christmas time.

3 – One senior player might not have the best game ever and people will say ‘See?! I told you that player was past it. We must sell that player at once and get a new player in the transfer market for if not I do declare that we shall never win a game throughout the duration of the entire season and, although it would pain me to do so, I would have say I TOLD YOU SO at every available moment.’

4 – The Arsenal fans at the game will have a fine time regardless and, with any luck, there’ll be an amusing banner of some kind.

5 – I won’t watch it. I’ve got a lot on today but I might get a chance to watch a few minutes. If not I’ll wait for Match of the Day. It’s definitely on Match of the Day, right? Thought so.

The make-up of our first team squad is pretty obvious, but then this time last season you’d have got long odds if you’d said that Hector Bellerin and Francis Coquelin would be regulars by the end of the season. There are a few players on the outskirts who the manager wants to look at during the next few weeks to see if they’re ready or capable of making the step-up. He says:

It’s a good opportunity for me to give a chance to players who are on the fringe of the team and to see how close they are to contributing. That can influence my decisions before the transfer market is over.

It’s hard to look at the likes of Akpom, Crowley, Iwobi, Zelalem et al, and pick one that might make the breakthrough, but much depends on timing and circumstance. Bellerin was given a chance when Debuchy got injured (twice) and Calum Chambers found himself out of form (by the way, check out the guns on Calum … ooooof!).

Perhaps it’s easier in a position like full back where there aren’t as many options, because asking someone like Zelalam or Crowley to make an impact in midfield when we have a veritable plethora of players to choose from is asking a lot. It would mean something went terribly wrong with the Shadification Process that has seen our fitness improve so much over the last 6 months. Still, you just never know, so maybe one or two will catch the eye before we get down to real business.

For other players on the fringes, the door is opening in various ways. For Carl Jenkinson it’s a revolving door as he’s signed a new deal with the club and then joined West Ham on loan for a second successive season. I think that’s a decent move for him, for them, and for Arsenal. He gets to play regularly (hopefully), if he continues to develop then we take back a player who is just 24 as Debuchy moves the far side of 30, and if Bellerin continues the way we all hope he will, it’ll make for a very healthy right-back situation at the club for years to come.

Meanwhile, it’s a door to another dimension as reports this morning say Real Sociedad have tabled a £6m bid for Joel Campbell who is, apparently, keen to move because he doesn’t feel like he’s going to play enough with us. And if that is the case, it’s pretty easy to see his point of view. The loan at Villarreal hardly did enough to push him into the manager’s thoughts for this season and when it comes right down to it, unless he takes a massive step-forward as a player, it’s hard to see him having any kind of future at Arsenal.

And finally Yaya Sanogo has eschewed a move back to Ligue 1 with Lille who were interested in taking him on loan and has, it seems, decided to go to Ajax for the season. With all due respect to Lille, perhaps the tutelage of Dennis Bergkamp – number 2 to Frank de Boer – played a part in that. If you were a striker and you were looking for the kind of guidance that would help you develop as a player (along with regular football), the choice between the two seems kind of obvious.

Whether that’s going to be enough to turn Yaya into a player who can come back and stake a claim for a first team place at Arsenal remains to be seen. I have my doubts, to be honest, but ‘Once Coq’d, twice shy’, as they say, you just never know.

Finally, if kits are your thing, there are some pictures of the new away kit – launched yesterday in Singapore – over here. Right, that’s about that. We’ll have some bits and pieces from the match and any post-game stuff over on Arseblog News later on.