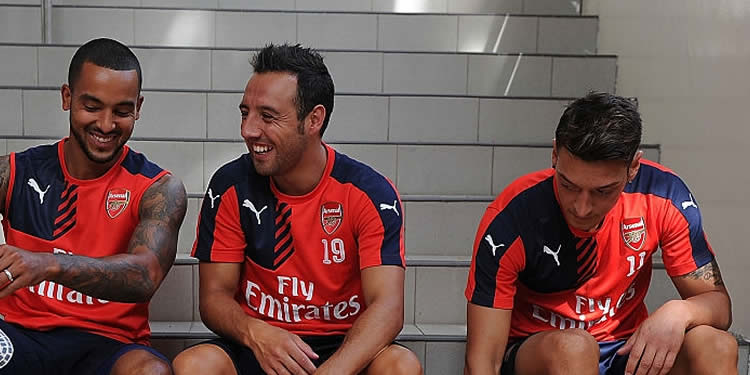 I woke up this morning thinking I had a transfer exclusive after a between Snooze dream saw me gain exclusive information about our pursuit of Stoke’s Steven N’Zonzi. Of course it was all just in my mind and he’s signed for Sevilla anyway, so shut up brain.

From Singapore, the manager has been talking about further arrivals after the £11m capture of Petr Cech, saying:

That doesn’t depend only on us, it depends on whether we can find them, but if we can find one or two players we will do it.

This summer there’s no need for signings to make up the numbers, so to speak. We’re not short of bodies in any particular area. We have pretty much enough of everything. Whether you think those options are sufficient to win the title is another matter, but the bottom line is we have them. It’s not like last summer, or the beginning of last season, when we had to play full-backs at centre-half and so on.

I know we went over this the other day, but I’m more and more convinced that if we sign any more players they’re likely to be ‘blue chip’ purchases that really improve the first XI. In the same way that Cech was brought in to improve a position that wasn’t really a problem, we might sign a striker if the right one becomes available despite the fact Giroud did pretty well last year, and that we also have Welbeck waiting in the wings.

I know there’s some unrest about what other teams are doing, particularly Man Utd who have bought Bastian Schweinsteiger and Morgan Schneiderlin. To my mind, while we could have used the latter, their midfield situation was one which really required them to spend a lot, while our only real issue in that area is if we have the right kind of back-up/competition for Coquelin.

Like, we’re not getting bent out of shape over Chelsea signing Begovic from Stoke because we’ve got three keepers already. Schneiderlin might well have been a useful purchase but at £24m, and as player who I think is closer to a traditional CM than a DM, it’s becomes harder to make the case that he’d have been worth that investment when you’ve got Aaron Ramsey and Jack Wilshere. Still, from the way the manager is talking, if the DM of all DMs was found or became available then I think we’d do it.

I also firmly believe that focusing on what other teams do in the transfer market is the easiest way to drive yourself mad during a transfer window. Remember how crazy people went over United signing Falcao? We have a good squad – which can be improved, no doubt about it – but for me there just isn’t the urgency or demand for us to do quick business just because others are.

Since signing Ozil we’ve spent £144.5m on eight players, and the level of the team is much higher than it was. Back in August 2013 BO (Before Ozil), we were far from where we should have been, but over the last couple of years we’ve seen an almost unprecedented level of investment in the squad. I don’t expect that to stop or for us to start resting on our laurels, I just think that it’s easier to find players to improve a weak squad. When you’re trying to make good one better, it becomes more of a challenge, and that’s where we are.

Interestingly, Mikel Arteta (who also spoke about the reason he delayed his contract signing), touched on the way things have changed since he joined the club in 2011:

Instead of selling the best players, they decided to keep the players and keep adding the quality every year Once we do that we start to show more consistency, start to win trophies , confidence, atmosphere, everything gets better.

And he highlighted Cech’s arrival as a signal of that:

His ambition is still there even though he has won everything in England and in Europe. Those type of signings give a lift to the whole team. He’s not just a good goalkeeper. He has experience and ambition. He’s not here just to sit on his back. He wants to compete, he wants to keep winning.

So, if that desire to improve applies to the goalkeeping position, why wouldn’t it apply everywhere else? The issue, of course, is finding the players who can make that improvement. Everyone talks about the need for a striker, but as we discussed on yesterday’s Arsecast Extra, it’s a position almost every team would be interested in signing someone for, but for which there aren’t really a wealth of established, stand-out candidates.

The challenge for our manager, and all the others too probably, is to find the next big thing before he makes that breakthrough. So then you’re having to take a chance on potential, hoping he’ll make the step-up to becomes something special, something better than you’ve already got, and that might require a leap of faith that’s perhaps at odds with the strategy of only buying better than what you’ve already got.

Anyway, interesting times. I still think we’ve got at least one purchase left in us before the window closes (not so much before the season starts), but who, why, where and when etc? … your guess is as good as mine.

Finally, as you’d expect, the manager has shot down stories linking Mesut Ozil with a move away from the club:

And on the spurious links to Juventus:

During this period the newspapers are creative, and have to be creative, but many times the stories come from agents.

Whether that was a dig at Ozil’s people, I don’t know, but I love the diplomatic way he described some of the stuff that’s in some of the papers. Creative, haha.

Right, that’s your lot for today. More from me tomorrow.