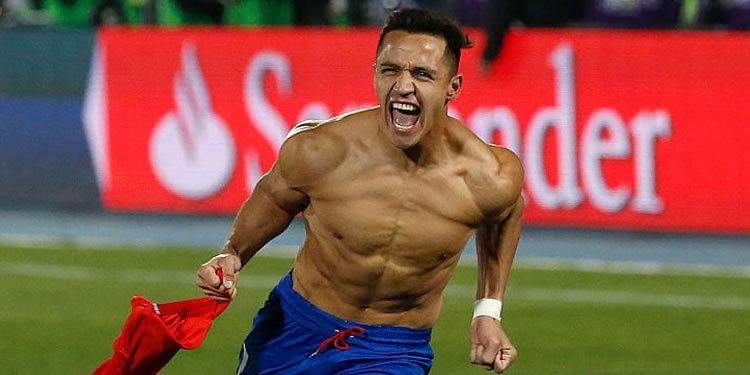 I have a terrible confession to make folks. After all my talk of being football free until the new season began I folded last night.

Mildly under the influence, I watched the second half of extra-time of the Copa America final and then the penalty shoot-out. Spoiler alert: Chile won. And with a penalty from Alexis too. Quite the penalty too, check it out:

Quick puff of the cheeks to put the keeper off, that’s a fantastic ploy. He studied that shoot-out between Villarreal and Arsenal in 2006 when Riquelme did the puffy cheeks + dry spit so Jens knew he’d bottle it, and this was clearly the plan to put off the Argentina keeper. Then he clips it like that into the other corner to win the tournament for the first time in his country’s history. Oooooof.

The man has got some balls. He’s the footballing equivalent of Randy Marsh, and I can think of no greater praise than that.

The man now deserves the following:

In seriousness though, what a season he’s had. All the goals for us, the FA Cup, that goal in the FA Cup which is still monstrously arousing even a month and half later or whatever it is, capped off by scoring the winning penalty in Chile’s first Copa America, and on home soil too.

You might worry slightly that he could suffer something of a hangover from it all, but I bet he’s the kind of guy who doesn’t suffer from them at all. The one guy who turns up to your game of Sunday 5-a-side after you’ve all been out the night before until way past your bedtime and drinking far too many unnecessary drinks all fresh and not looking like he wants to puke every time he moves or kicks the ball.

All the same, I’d like him to take a few weeks of doing nothing. There were reports that he was suffering from injury going into this game and might even miss it, so I suspect he was running on pure desire, adrenaline and pain-killing injections. Let’s just make sure he gets the time he needs to get fit and healthy for the new season. The onus is on others to make up for what we miss when he’s not in the team, but that’s why you have a big squad.

Elsewhere, Lukas Podolski’s move to Galatasaray is complete. He was presented yesterday in Turkey and we get around €4m for him which can be invested elsewhere. It also takes around £100,000 a week off the wage bill – not that that’s a particularly interesting or relevant thing but it allows for a redistribution of that from the budget. Will it all go on Theo Walcott’s new deal, making him the highest paid player at the club?

No. But some of it might if he signs one. To my mind it should go on puppies and sandwiches for Alexis, but that’s why I write a blog and don’t run a football club with a turnover of hundreds of millions of pounds. Speaking of Turkey, it also looks like Robin van Persie will end up there as he’s on the brink of a move to Fenerbache. It puts me mind of his statement when he left for Man Utd:

Hey you guys, you guys should know that unfortunately in this meeting it has again, you guys, become clear to me that we in many aspects disagree, you guys, on the way Arsenal FC should move forward you guys.

You guys! He’s going to play for Fenerbache you guys. OMG! You have to laugh. Just because that’s what football’s about. He disagreed with how the club should move forward, we moved forward by signing world class players and winning the FA Cup for two consecutive seasons. I can just imagine Arsene in that meeting saying, “Robin, we have great plans. We’re keen to improve and make sure that this football club doesn’t have any two-faced, perfidious duplicitous wankhammers in it anymore!”, and a lightbulb going off in van Persie’s head – “Well, this clearly isn’t the place for me”.

I also loved this from the Guardian piece:

Even Radamel Falcao, who suffered a dismal campaign while on-loan at United, kept Van Persie out of the side.

Haha. And again, haha. I’m feeling a little delicate this morning but that has cheered me right up. Even Radamel Falcao. It’s like getting the lead in a film then being replaced by Tommy Wisseau.

Right, have yourselves a jolly Sunday. More from me tomorrow as pre-season starts!