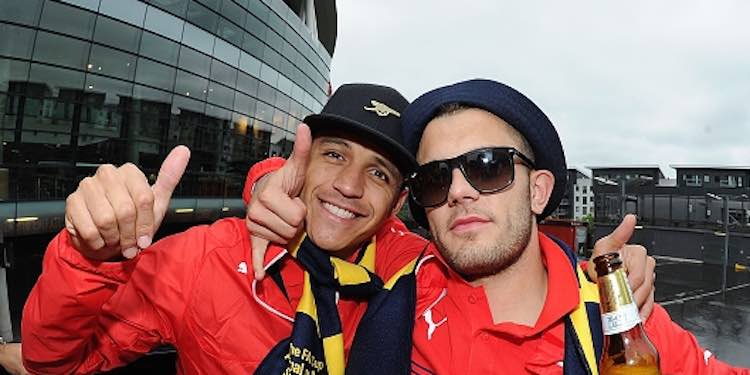 Good morning to you from Edinburgh where Tom and I eventually got to yesterday despite some delays at the airport. It gave us another chance to watch the game over a few beers though. Ooof.

We met up with Mrs Blogs, the Mugsmasher and some pals to continue what was a splendid weekend. Those that ran the marathon did it with a lot more pain than us, but some beers, food and Margaritas helped ease that as the night went on.

I didn’t have much of a chance to see any of the parade and the celebrations, but it doesn’t look as if the inclement weather dampened the spirits in any way. And certainly not in the case of Jack Wilshere who ‘sparked outrage’ by asking people what they think of Tottenham. The people replied that they thought Tottenham is shit. The obvious question to follow that up is to ask the same people what they think of shit, and the only answer to that is Tottenham.

I don’t see the problem. I mean it’s not as if Tottenham isn’t shit, or shit isn’t Tottenham. If he was misleading the people in any way by making them say something was shit that wasn’t shit then you might just have some grounds for criticism, but that’s simply not the case.

In any event, there’s a touch of the Helen Lovejoys off the people who are bothered by this. We just won the cup, it was a chant that had done the rounds all day, and if it’s so outrageous that a footballer might connect with the fans then we might as well give it all up now. In the pantheon of terrible things footballers have done, this hardly even registers. He celebrated like a fan, and there’s nothing wrong with it.

And look, it strikes me that this Wilshere thing is a thing because there wasn’t anything for some people to complain about because of the way we won the cup. Last season there was the huge amount of pressure involved because we’d been so long without a trophy. That was reflected in the performance on the day and how much of a struggle it was to finally beat Hull.

This time around we saw an Arsenal team who went out and controlled a high pressure game from the first whistle to the very last in a hugely impressive way. It was a mature, high-quality performance that the opposition simply couldn’t live with. When you ask if progress has been made this season, I think there’s some evidence of it right there.

When you see Ozil gliding across the pitch making passes you can’t even see from high up in the stand; when you see Alexis Sanchez blast home a goal like that in a cup final; when you see you Theo Walcott score in a big game; when they’re so ably supported by a midfield of Ramsey and Cazorla with Coquelin prowling around cleaning up any potential mess; and when you see a back four that together and assured, you can’t not see progress in this season.

We’ve got all the time in the world (well, the summer break at least), to discuss how things might be improved – because it is possible to enjoy what we’ve got and still think we can do better. The two things are not mutually exclusive, but there’s still a need to step back and simply enjoy the fact we’ve won the cup for the second year running.

Having spent another brilliant weekend with friends and Arsenal fans from all around the world who travelled to see the final (some of them just wanted to be around and never had a chance of a ticket), it’s important to remember this side of football. We all love the game, the club, the players etc, but none of it would be worth a damn without a hilarious man in a red and white wig trying to make you drink a completely unnecessary Jaegerbomb (I didn’t drink it, but I applaud his efforts all the same).

To everyone involved in this weekend (and there are too many to mention), thank you. It was genuine delight to share it with you, and I look forward to doing it all again at some point in the not too distant future. Next year for a hat-trick, perhaps!

A couple of quick bits of news which you can look over. Firstly, a statement from Wojciech Szczesny about his future, while Theo Walcott says his contract talks will ‘take time‘. Perhaps something we can discuss later on in the Arsecast Extra.

As I’m not back in Dublin until late afternoon, we won’t be recording until this evening, but we’ll give you a heads-up on Twitter when to send questions and, of course, when it’s ready for listening.

Now, it’s time for some coffee and breakfast. Normal service will resume tomorrow. Until then, have a good one.

ps – What do you think of Tottenham?