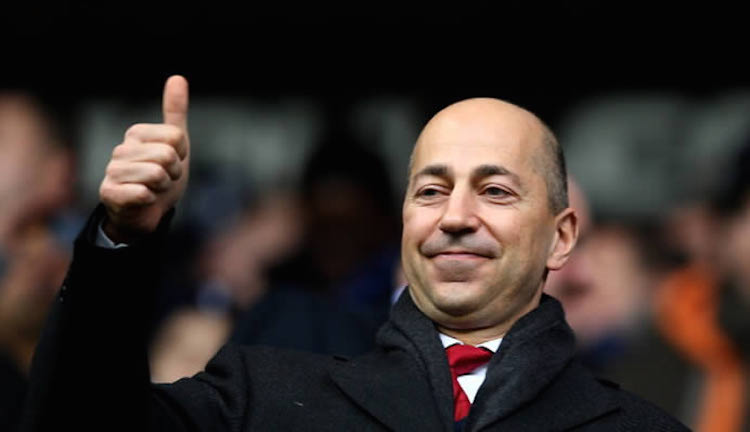 Good morning from a farm somewhere in Warwickshire, Englandshire, where I’ve woken up in the brightest bedroom in the world. My room is in the eves of a cottage, and there’s a skylight opposite the bed. It has a blind, but the blind is white, so the effect of said blind is similar to that of having a gigantic fluorescent light opposite the bed, and I woke up at 4.30am and have been trying to sleep since, covering my eyes with my hands.

As you may be able to guess almost immediately from the lengthy explanation of my entirely unsatisfactory sleeping arrangements, there is virtually no news, or even gossip to report to you today (unless you count The Metro as any kind of reliable source, and given that paper is free, you can imagine the kind of stories in it, designed entirely to make you pick it up or click on its links, and it surely hasn’t come to that. Yet).

We’ll start today with a transcript of the annual Q&A held by Ivan Gazidis with various Arsenal supporters clubs, as reported by Tim Stillman over on Arseblog News. It’s a very interesting read, covering a number of topics including integrating new players, injuries, commercial revenues and how to increase them, ticket prices, and Stan Kroenke’s ownership.

Ian Wright was also present, which as Tim points out in the article, seems like something the club might’ve thought of in previous, leaner years, able as he is to act as a human lightning rod. Wrighty naturally also chips in with plenty of his own thoughts and opinions. As I say, well worth a read.

Next up, in lieu of any other Arsenal news, part four of a series I really should’ve drawn your attention to earlier in the week – Copa load of this – over on Arseblog News, keeping an eye on what’s been going on in the Copa America currently being played in Chile.

Our own (for now) David Ospina’s Columbia beat Brazil 1-0 the other day. It turned into an ugly affair at the final whistle, with Neymar kicking the ball at a Columbian player apparently in frustration at the result, sparking a bit of a brawl in which both Neymar and Columbia’s Carlos Bacca who both received red cards after the game had finished (it must be funny for Bacca at the bank: “so you’d like to open an account, Mr Bacca?”, “YARRARRGGHGHGGHGH“; oh, such larks).

The other point of interest in Chile over the past few days has been Chile midfielder, wearer of ridiculous haircuts, and now writer off of Ferraris, Arturo Vidal, after he crashed his motor while drunk, with his wife in the car. Thankfully they both walked away and no one else was hurt, but he’s been given a public dressing down by our own Alexis Sanchez, whose metabolism is so fast he can drink an entire bottle of whisky and still be fit to drive ten minutes later*:

I told him ‘Arturo, you better bust your arse.’

It’s very hard what happened with him but as a group, the least we can do is put up with it as a team.

There has been indiscipline, we were wrong, you are right about that. But we are a family and we are there to support him.

Vidal has five goals so far in the tournament, and is someone we’ve previously been linked with, and perhaps unsurprisingly therefore, keeps his place in the Chilean squad for the tournament.

I’ve not watched any of it myself, but it sounds like it’s been an entertaining tournament. You can read the other parts in the Arseblog News series here.

Finally for today, a brief correction. I said yesterday’s article in the Guardian was written by “Smudger”, on the basis that the author was called Alan Smith. I’ve seen articles in the Guardian by Alan before, and I thought those were by the former Arsenal player too, but it turns out he’s not THAT Alan Smith at all. Or the other one, apparently. He’s actually this one. My apologies to all the Alans concerned.

Also, I’m not sure whether it’s the same everywhere, but certainly in the UK, today is Father’s Day, so remember to give those dads a ring.

That’s really as much as I can eke out today, so I’ll leave you to enjoy your Sunday. I’ll be back tomorrow, with my final blog before Blogger’s loan spell finishes.

*This may or may not be made up. You decide.

Alexis wins the Copa America for Chile, and other stuff